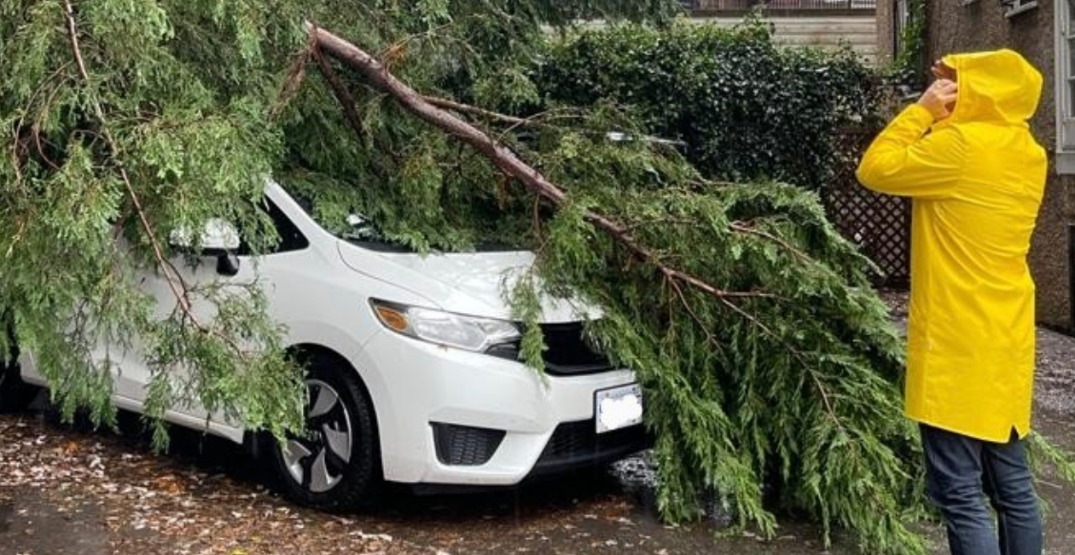 A Vancouver resident who lives in the West End had a large tree branch fall onto his car, and two days later it’s still trapped.

Blaise Wong reached out to Daily Hive to share his story, saying after reaching out to multiple organizations he has run out of options.

Wong wasn’t surprised that this happened to him with all the weather events occurring lately, but what did surprised him is how hard it has been to find help.

Wong’s situation is a lot more complicated than a typical tree falling situation.

“The problem is that it is resting on a utility wire,” Wong said in an email to Daily Hive.

“I contacted 311 and they told me they would send someone from the arborist department to see whether the tree was a city tree, and whether they could take it down.”

Because it was resting on a utility wire, the arborist couldn’t do anything. To add to the complications it wasn’t a city tree that fell. The arborist suggested reaching out to BC Hydro, so he did.

“They said that the line was in fact a communications line, so I had to contact Telus. I contacted both Telus and Shaw.”

Unfortunately it was after hours for both companies, so Wong had to wait another night to free his trapped car.

For the record:
– @CityofVancouver says it’s a private property tree and they won’t touch it
– @bchydro says it’s not on their line so not their problem
– @Shawhelp noted the tree is on the line, but it’s not actually touching. Not their problem

A Telus technician finally came the next morning and said they would take care of it. But, more complications arose as Telus did not know who to bill for the operation. Over two days later his car is still stuck under a tree branch. Wong has also been advised to not move anything himself.

Wong says this isn’t a “woe is me” situation, but a cautionary tale to anyone who might have to deal with a similar situation.

“For some reason I am the one leading this, even though I am only a tenant in an apartment, and not a tree removal expert, or insurance liability expert,” said Wong.