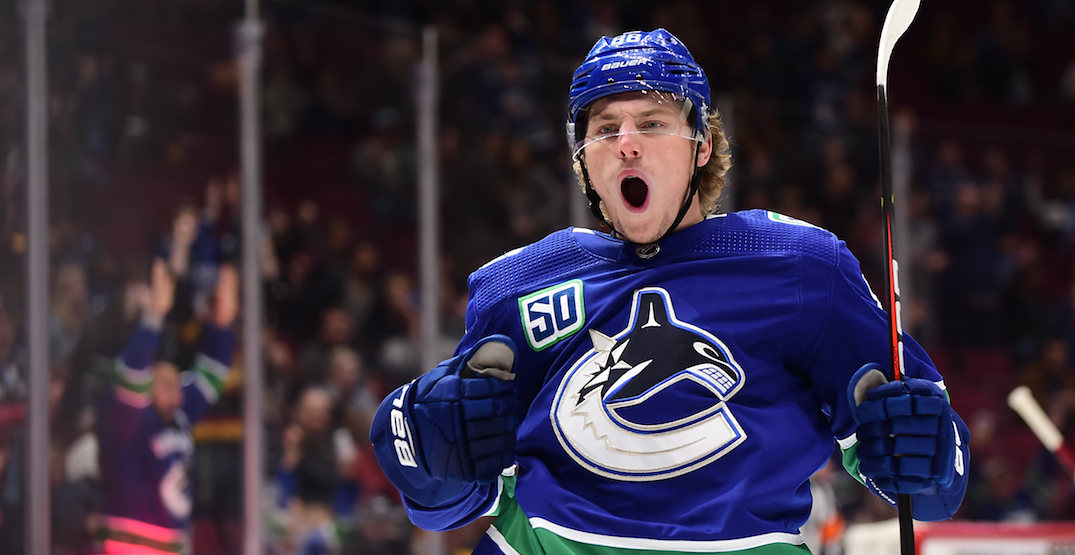 Adam Gaudette went from promising prospect to seriously suspect in the eyes of Vancouver Canucks management in a pretty short amount of time. The Canucks traded Gaudette before the trade deadline today, appearing to give up on the former Hobey Baker Award winner.

Selected by the Canucks as a fifth-round draft pick in 2015, Gaudette blossomed at Northeastern University in the three years that followed. The Braintree, Massachusetts, product showed promise during his first pro season, with 11 points in 14 games with the Utica Comets and 12 points in 56 NHL games with Vancouver.

He had a big league shot, and nobody enjoyed scoring goals more than the “Hockey Gaud.”

When the season was paused due to the pandemic last year, Gaudette looked like he could develop into a solid third-line centre, giving the Canucks strength down the middle behind Elias Pettersson and Bo Horvat for years to come.

He needed to get stronger and round out his 200-foot game, but that’s true for a lot of young players.

The turning point for Gaudette came in the Edmonton bubble, as he appeared to quickly lose the confidence of head coach Travis Green during the postseason. He was supplanted by Brandon Sutter, as the team opted for a more reliable option in the role of third line centre. Gaudette missed some games due to injury, and was ineffective on the wing, going without a point and registering just four shots on goal in 10 playoff games.

Unfortunately it was more of the same for Gaudette this season.

You can’t question the 24-year-old’s effort level, and a drop in his shooting percentage (6.8%) suggests he’s been unlucky this year. His on-ice shooting percentage (3.75%) was the lowest of any Canucks player that has appeared in at least 10 games this season — another indication of poor luck.

But from GM Jim Benning’s comments today, it appears that Gaudette was moved more for his defensive struggles than his offensive slump.

“With Adam Gaudette, with him we just felt it was time for a change of scenery,” said Benning.

“To be quite honest, we expected him to take another step this year. He’s played alright for us, but after the season he had last year, we were expecting him to come in and take another step. We didn’t really feel like he did that.”

If you’re not scoring and your defensive play doesn’t inspire confidence from your coach, it’s hard to succeed in the NHL.

“I think overall, looking at his two-way game, we just felt like Matthew Highmore plays a more complete two-way game. He’s a guy that gives us speed, and I think given an opportunity he can score too. I think it’s a good deal for both teams. Both players get a fresh start, and we’ll see where it goes.”

Highmore did score three goals and an assist during nine postseason games, but it has to be said, he is an underwhelming return for Gaudette, who the Canucks seemed to believe in not that long ago.

“It was a lot of different things [that] went into the decision,” said Benning. “At times he felt like [Gaudette] wanted to play higher in the lineup than he was. When we talked to him it was about his two-way game, and keep improving upon that. I think it was just the right time for him to get a fresh start.”

The elephant in the room is the fact that the Canucks traded Patient 0 in their COVID-19 outbreak. Were Gaudette’s teammates upset at him for being the cause of the outbreak, as unfair as that may be?

Last week Canucks physician Dr. Jim Bovard was clear in saying that no rules were broken leading to the outbreak and that the team made it clear that they weren’t blaming anyone individually.

But it would be only human nature if that sentiment existed.

There are conflicting reports regarding that, with Sportsnet’s Iain MacIntyre sporting he was told Gaudette testing positive for COVID had nothing to do with him being traded. Matt Sekeres has heard otherwise though, as he reported that players and management were upset at Gaudette.

I'm told the opposite.

That there were resentful players & that management was upset with him. This was final straw with a player that was already backsliding on the ice.

If the COVID outbreak played a part in Benning’s decision, perhaps it was merely the last straw for Gaudette, who was frequently mentioned in trade rumours this season.

Regardless, it’s back to the drawing board for the Canucks regarding their third-line centre spot, which needs to be a priority going forward. Brandon Sutter is a pending unrestricted free agent, and is realistically a fourth-line player at this stage of his career anyway. Highmore is listed as a centre, but has played primarily on the wing in the NHL.

Prospect Tyler Madden was dealt in the Tyler Toffoli trade last year, so he’s no longer an option. Kole Lind has been converted from a winger to a centre in Utica, and maybe he proves he can play at the NHL level. Otherwise, centres in their system include the likes of Arvid Costmar and Carson Focht, but those players are still long shots to become impact players at the NHL level.