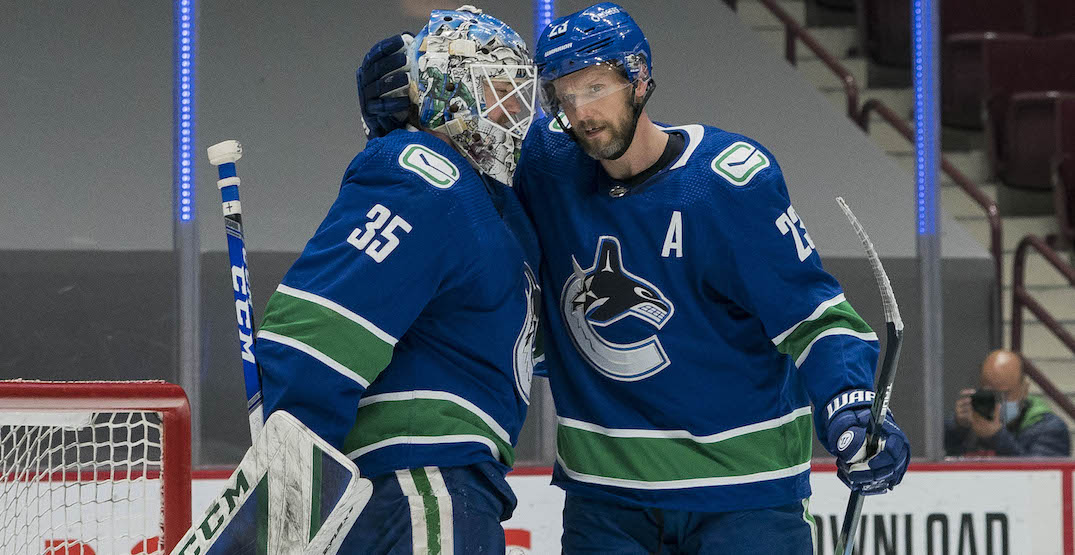 It’s been 10 days since the Vancouver Canucks first discovered that COVID-19 had infiltrated their team.

The virus spread quickly, with 25 members of the organization having tested positive. Despite players being young and among the fittest people in our population, in some cases, they have reportedly suffered from symptoms like vomiting, cramping, and dehydration. In at least one instance, a player reportedly needed IV treatment.

Furthermore, players have had to worry about their family members, as players have unfortunately unknowingly spread the virus within their own homes.

Thankfully, Canucks team physician Dr. Jim Bovard confirmed today that nobody has been hospitalized, adding that players are now entering the recovery phase. Today also marked the second day in a row that no new Canucks players were added to the NHL’s COVID list.

Dr. Bovard joined Canucks GM Jim Benning in the first media availability since the team shut down operations on March 31. Benning began with a statement, thanking everyone for their support during what he called a “difficult time,” and provided a health status update for his team.

“This puts into perspective what’s most important, our health and the health and well being of those we love,” said Benning. “Many of our players, staff, and families’ health has improved. We’ll continue to prioritize efforts to ensure the full recovery of our entire Canucks family. From the bottom of our hearts, thank you to our medical staff, BC health officials, and the NHL and NHLPA medical experts for their extraordinary care and guidance.”

Dr. Bovard said those affected by the virus have been suffering through “the whole range” symptoms, in line with what he’s seen with patients in the last year.

“Nothing unusual, nothing different,” he said, though clearly still very serious.

“For the most part, our players are on the other side of it,” added Benning. “We still have family members that are getting sick and you know I think the players worry about that.”

Bovard described the outbreak as a “microcosm” of what’s happening in the broader community. BC smashed its previous single-day COVID-19 record on Thursday, with 1,293 new cases reported, as variants of concern have helped fuel the third wave.

The Canucks were in the midst of a six-day break at home when it was discovered that Adam Gaudette first tested positive on March 30.

No rules were broken, as the virus spread within the team after an “individual had gone to a place within the guidelines,” said Bovard. “That place subsequently was discovered to have cases of COVID and that’s how I got into our organization. We’ve made it very clear within our group that there’s no culprit here other than the COVID virus itself.”

Bovard also reconfirmed that the virus was a variant, though they don’t know which one, as the process for determining that is more complicated and time consuming.

Benning confirmed that the Canucks are planning to play all of the remaining 19 games on their schedule, despite the short timeframe.

“The first order of business is getting our players healthy, getting them back skating, working out, and having good communication with them as to what they’re dealing with, how they feel,” said Benning. “Then, ramping it up to where we have some team practices, and then from there, actually playing the games.”

“Once we’re healthy and we’re ready to play, I expect our players are going to be competitive here down the stretch. We’ve got a hard-working group, a team that has a lot of pride.

“Our schedule will be hard. We’re going to have a lot of games in a short period of time, but we’ll just see how they feel and how we come out of this and see where it goes.”

In order for that to happen, the team first needs clearance from local health officials to reopen their facilities so players can get back in shape. Even the few players that haven’t tested positive for COVID-19 have been off-ice this entire time too.

Dr. Bovard and head athletic trainer John Sanderson are meeting with NHL and NHLPA doctors today to discuss when they can reopen team facilities and when they can begin playing games again.

Before returning to the ice, the Canucks will not only need clearance from the league, they’ll need approval from local health officials to reopen, just like any other business.

“[Local health officials have] been looking at us very carefully and working with our organization and guiding us in terms of when we can come back,” said Dr. Bovard. “That will be a naturally evolving process, and we will be working with them, and we will reopen and restart work only when they give us the clearance to do so.”

“As always, the final decision about our ability to go back into operation is no different than any other workplace in the province. Public health will listen to our report and what we’re going to do, and then we will have to get the green light from them to return to work, and that will be the final step in the process.”

The most optimistic timeline right now has the Canucks returning to game action by Saturday, April 17, which is just three weeks away from when they were supposed to play their season finale.

But even that date is probably too optimistic. Benning said he doesn’t know when they’re going to be able to restart but figured the end date could be extended.

When they do begin playing again, Benning said that he thinks he’ll have most of his players back “outside of two or three guys,” meaning that we won’t be seeing a glorified version of the Utica Comets suiting up.