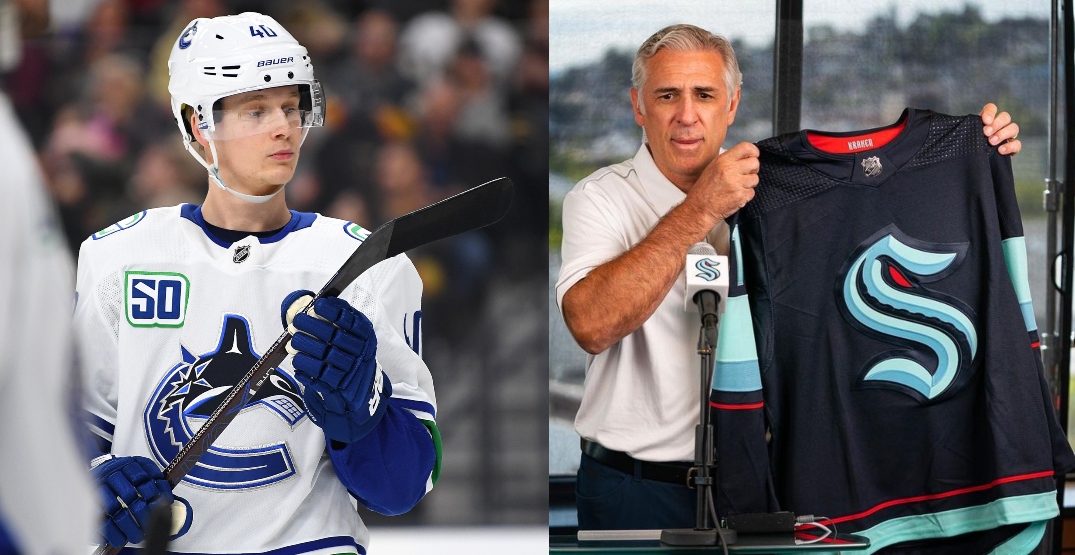 The road to a Stanley Cup playoff spot in the Pacific Division could very well go through Vancouver or Seattle next season.

The Canucks-Kraken rivalry is looking very promising, as the geographic rivals look to be closely matched. Now that the Kraken have assembled their roster and the Canucks have reshaped theirs, oddsmakers aren’t in agreement on which team is better.

Betting sites like Bodog, Bet365, Betway, and William Hill are leaning towards Seattle with their Stanley Cup odds. Meanwhile, if you check Sports Interaction, Pinnacle, or PlayNow.com, you’ll see the Canucks with better odds.

The Kraken were given the same expansion rules as the Vegas Golden Knights, and like Vegas, they promise to be far better than expansion teams in previous generations. But will they be a Stanley Cup contender right away? That’s yet to be seen.

The Canucks, meanwhile, are coming off a dreadful season that saw them sink to the bottom of the North Division standings. They’ve made major improvements to next year’s roster though, and could get bounce-back seasons from many of their young core players.

So which team is better? Let’s break it down.

The Kraken, but it’s close.

Seattle is poised to have great goaltending in their expansion season, as they signed underrated Philipp Grubauer away from the Colorado Avalanche. The German goaltender was a Vezina Trophy finalist last season with a .922 save percentage.

With just 38 NHL games on his resume, Chris Driedger is not well tested, but the 27-year-old has a sparkling .929 career save percentage.

While Grubauer and Driedger posted better numbers last season, Thatcher Demko (.915 SV%) has the highest ceiling of any of the four goalies. Jaroslav Halak’s age (36) is a concern, but so is Driedger’s lack of experience.

How do Demko’s numbers look behind a better Canucks team? Conversely, can Grubauer excel to the same degree now that he’s gone from the Avalanche juggernaut? We’ll give the edge to Seattle based on last year’s results, but this could easily break the Canucks’ way.

Vancouver’s back end was a mess last season. The addition of Oliver Ekman-Larsson will help, but we shouldn’t ignore the loss of Nate Schmidt. Quinn Hughes could be poised for a bounce-back season, and Jack Rathbone could become an NHL regular — though that’s not a guarantee. The jury’s out on Tucker Poolman.

While the Kraken doesn’t have anyone that compares to Hughes, they do have depth, and a pretty solid-looking top four.

Mark Giordano will turn 38 years old before next season, so his best days are certainly behind him. Still, he played 22:57 a night for Calgary last season and gives Seattle stability on the back end, which is deep even if it lacks much star power after him.

Seattle has depth, but Vancouver is much-improved in that regard.

The Kraken simply can’t match the Canucks’ top-end forwards, which is a decided advantage for Vancouver. Yanni Gourde had 36 points last season, which is more than any other Kraken player, but less than Brock Boeser (49 points), J.T. Miller (46 points), and Bo Horvat (39 points) last season.

By adding Jason Dickinson and Conor Garland, along with the expected debut of Vasily Podkolzin, the Canucks should now be able to put together three very good lines.

At the risk of looking silly if the Kraken catch lightning in a bottle like the Golden Knights did in 2017-18, the Canucks are the better team — but barely.

While we’ve given the Kraken the advantage in net and on defence, they can’t match Vancouver’s top end talent. Given the Canucks made improvements to their middle six forward group, their third and fourth lines shouldn’t get caved in as they have in recent years.

The Canucks aren’t as bad as they looked last year, and will get more from a healthy Pettersson and a bounce-back season from Hughes.

There are question marks, of course. How good is Ekman-Larsson? Is Demko an elite goalie? Will Hoglander and Podkolzin take steps forward?

But of course, the Kraken have question marks too and are far from guaranteed to replicate Vegas’ success.

In any case, next season promises to be intriguing from a number of perspectives, as the NHL’s first-ever Pacific Northwest rivalry begins.