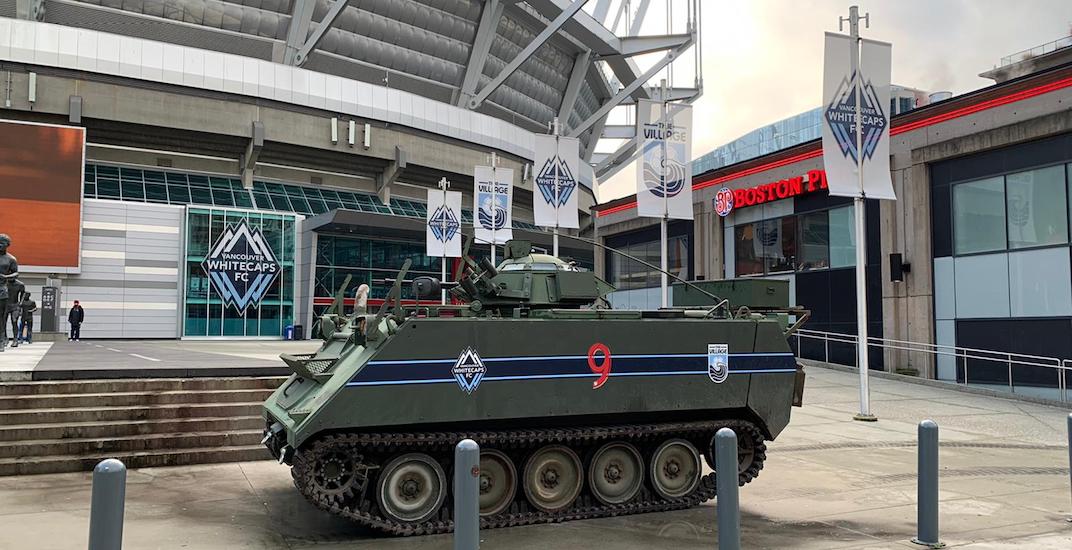 A Whitecaps FC branded tank with the No. 9 on it has rolled into downtown Vancouver and was spotted parked outside BC Place Sunday morning.

Unless the Whitecaps plan on waging war sometime soon, it appears to be a publicity stunt for a major player signing.

The Whitecaps have sent out a press release, inviting media to attend a Monday morning media conference where the team’s new sporting director Axel Schuster will introduce a new striker.

Barring a major surprise, that player will be Lucas Cavallini, a Canadian international who is making the move from Liga MX in Mexico.

According to a report from ESPN, the Whitecaps are paying a team record $6 million transfer fee to Mexican club Puebla to get the 26-year-old striker. ESPN also reports that Cavallini has agreed to a four-year contract.

And if there was any remaining doubt, Cavallini’s nickname is “El Tanque” and he wore No. 9 with Puebla — so that tank appears to be for him.

The Whitecaps have also teased the signing on social media, acknowledging the criticism made by fans about their reluctance to spend money.

Cavallini has scored 28 goals and eight assists in 81 appearances with Puebla in Mexico’s top league since 2017. Prior to his move to Liga MX, Cavallini plied his trade in Uruguay, coming up through Nacional’s youth development, before moving to Juventud, CA Fenix, and Penarol.

The Toronto native is also a fixture on the Canadian national team, scoring 11 goals in 17 appearances playing for his country.