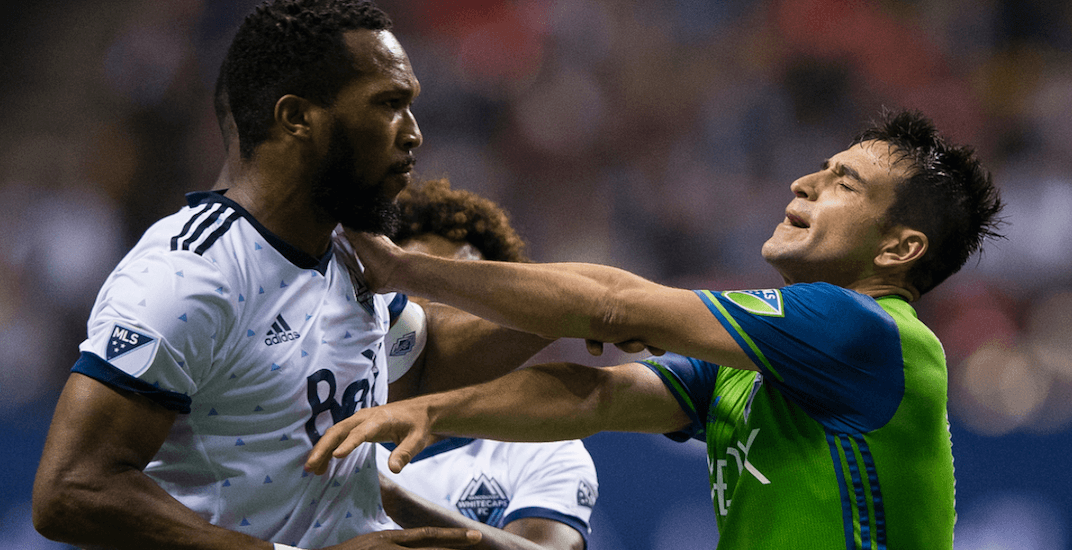 That was effectively what Sunday’s first leg of the MLS Western Conference semi-final was between the Vancouver Whitecaps and Seattle Sounders.

If the sellout crowd of 27,837 in the expanded lower bowl of BC Place expected more fireworks like Vancouver’s 5-0 demolition of San Jose, they would have left disappointed. Instead, fireworks came in the form of hard tackles and outrage.

There was no shortage of tension in the first MLS playoff series between these two rivals, with an extremely cagey first leg of the two-game series ending in a 0-0 draw.

“We got a good result,” Whitecaps captain Kendall Waston said. “Not the best one, but having a clean sheet is good.”

Indeed. The scoreless draw puts Vancouver in a position to win the series with a draw in the second leg on Thursday.

Both head coaches were far more interested in playing to not lose rather than open up and risk being hit on the counter-attack.

While the coaches played their intricate, 22-man game of chess in an effort to not be scored on, the players did what they could to spark some moment of brilliance. This more often than not meant a crunching tackle or deliberate foul to stop a promising attack.

While it had the intended effect of riling up the crowd (and each other), the hard-tackling antics were few and far between. The ‘Caps, for the first time in a very long time, seemed content to actually try and play calm, patient, possession-oriented soccer.

To their credit, it worked – in the sense that they didn’t concede. To their detriment, it was dull as paint drying and didn’t result in a home goal – one that may be sorely needed on Thursday for the return match in Seattle.

Sure, there were chances – Seattle were nearly gifted an own goal by defender Kendall Waston’s clearance thumping off his own crossbar.

The buildup? Quality. The clearance? Never in doubt. 😅 // @audi #MLSCupPlayoffs

“Just seeing that ball hit the crossbar, I was so relieved,” Waston said.

No kidding. Conceding an away goal would have been crushing for the home team.

Meanwhile, Vancouver managed to scramble a half-effort towards goal which was cleared – albeit without any sense of urgency or motivation until the 92nd minute or so.

The game plan was clear: don’t be scored on. It might be the right call in a close playoff series, but a chess-like approach to soccer is pretty darn boring to watch.

Referee Kevin Stott and 4th official Ricardo Salazar received an earful from both coaches as the game wore on, with both claiming clear fouls went missing.

“I thought he missed four or five clear small mistakes, which is why I was irate on the side,” Whitecaps head coach Carl Robinson said bluntly in his post-match press conference.

Gee, I wonder why Robbo wanted his set piece-loving team to get more free kicks.

More offensive than the referees, though, in the eyes of the home crowd were the antics of Sounders rookie fullback Nouhou Tolo.

Late in the game, Nouhou went to ground after awkwardly clearing a dangerous ball from the Seattle penalty area. After receiving treatment from the Seattle physios, Nouhou returned to the game to a chorus of boos – and went down again after a single tackle.

Nouhou goes down in a heap in 80th min. Stays on ground for full min assisted by trainer. Crowd boos as he stays in game pic.twitter.com/gruKMO4he7

There is an unwritten rule in soccer about the sporting thing to do when a player is injured being to kick the ball out of play, which the ‘Caps did the first time around. That rule, however, is somewhat unclear on the subject of repeat injuries to the same player during the waning minutes of a playoff game.

As a result, Vancouver winger Cristian Techera did not pause when the ball came to him in the attacking third with a prone Nouhou nearby. He did not kick the ball into touch, either. Instead, he went for goal, floating a long-distance curling over goalkeeper Stefan Frei’s crossbar and out of play.

While this indirectly allowed Nouhou to (again) receive treatment and (again) be led off the pitch, it still led to a dust-up between the Sounders (who felt aggrieved by Vancouver’s perceived unsporting play) and the Whitecaps (who were clearly not thrilled by Nouhou’s perceived time-wasting antics).

When the dust cleared, no cards were handed out, Nouhou moved into a forward position to avoid having to make any more defensive runs and the BC Place fans obligingly showered Nouhou with a chorus of boos every time the rookie was near the ball.

The battle of the evening

There were so many tasty possibilities for games-within-games in this match, positional battles between opposite numbers that could’ve meant the difference between win, draw, or loss.

Instead, the pivotal matchup of the evening turned out be Seattle winger Joevin Jones and Vancouver fullback Jake Nerwinski.

Jones, himself a not-too-shabby fullback (he played that role in Seattle’s 2016 MLS Cup-winning campaign), tested Nerwinski time and again with pace and trickey from wide positions.

To his credit, Nerwinski managed to keep most – not all – of Jones’ forays into the attacking third under control, limiting what the Trinidad & Tobago international could offer in terms of service to Bruin and Lodeiro. It’s yet another positive mark for Nerwinski’s rookie campaign, one that will likely end with Nerwinski keeping his starting role into 2018.

Since no goals were scored at BC Place, it’s winner-take-all in Seattle for the second leg on Thursday – with a twist. Thanks to the away goals rule, even a scored draw (1-1, 2-2, etc.) will allow the Whitecaps to advance. Of course, that would require them to score… so, we might end up going to penalty kicks if the game remains scoreless. At that point, surely somebody must finally put one in the net, right? Right?