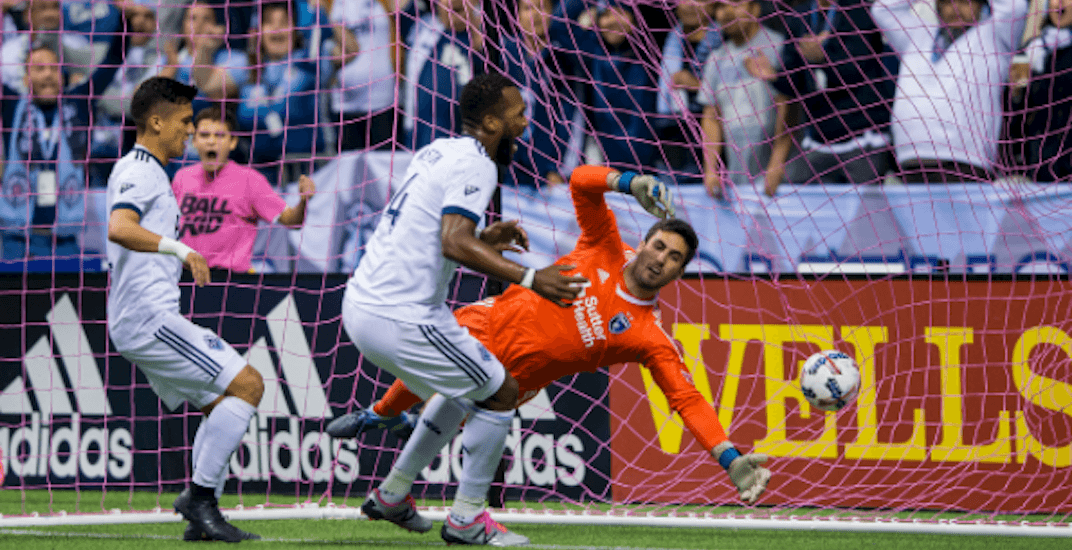 The San Jose Earthquakes are feelin’ all shook up.

The Vancouver Whitecaps buried the San Jose Earthquakes in a cascade of second half goals, winning 5-0 for their first-ever MLS playoff win Tuesday night at BC Place.

The Whitecaps had solid performances from front to back, particularly from substitute Nicolás Mezquida who scored two goals in quick succession late in the second half.

The beatdown of San Jose was much bigger than a win – it was a statement to the rest of Major League Soccer that the Whitecaps are back and they’re legit.

Much has been said in recent weeks with newcomer Stefan Marinović replacing David Ousted as Vancouver’s starting goalkeeper.

If it wasn't clear before, it is now, Marinovic is Robbo's guy and Ousted is definitely on the outs

Last weekend in the regular season finale against Portland Marinović spilled a routine save that led to Portland scoring a goal that was a turning point in the match.

Against the Quakes Marinović was flawless, recording a clean sheet and making a huge stop early in the game to deny the opening goal.

The Kiwi ‘keeper came up big again early in the second half to deny the ever dangerous Chris Wondolowski to keep his team ahead.

Marinović obviously did not let last week’s soft goal get to him, and he has to be Carl Robinson’s man for the rest of the playoff run.

Despite the lopsided final score, the Whitecaps held a slim lead over San Jose for most of the match.

Nearing the final half hour, the Whitecaps were leading 1-0 when they were awarded a free kick 30 yards from the San Jose goal.

That’s when ‘El Bicho’ stepped up and curled home a curling beauty to extend the Caps’ lead.

It was a world class strike from the Uruguayan, and was the official end to the stretch run slump.

Montero finally scores in the playoffs

It’s hard to believe that before Wednesday Fredy Montero had never scored an MLS playoff goal.

Fans were concerned that Montero had not scored since the end of September, and hoped he would find his mojo in time for the playoffs.

After winning a corner kick in the 33rd minute, Montero slipped his markers to score the first goal of the game.

Montero had a solid match against the Quakes, and will eagerly be looking forward to the conference semifinals against the former club, the Seattle Sounders.

No one thought that the Whitecaps had five goals in them.

With the match starting to get away from them, San Jose became desperate for a goal and were thoroughly punished by the Whitecaps.

Firstly, captain Kendall Waston put the match beyond the Quakes’ reach with his this opportunistic goal in the 64th minute:

Finally, Nicolás Mezquida added to the rapidly increasing scoreline after being substituted into the match for Yordy Reyna in the 68th minute.

The quiet and hardworking Uruguayan has faithfully served the club during his time in Vancouver, and scored two beautiful goals to complete the demolition of San Jose.

The Whitecaps now face the Seattle Sounders in a two-leg series that kicks off on Sunday afternoon at 5:30pm at BC Place. The second leg goes Thursday in Seattle (time TBD).

Watching these ones over and over again.