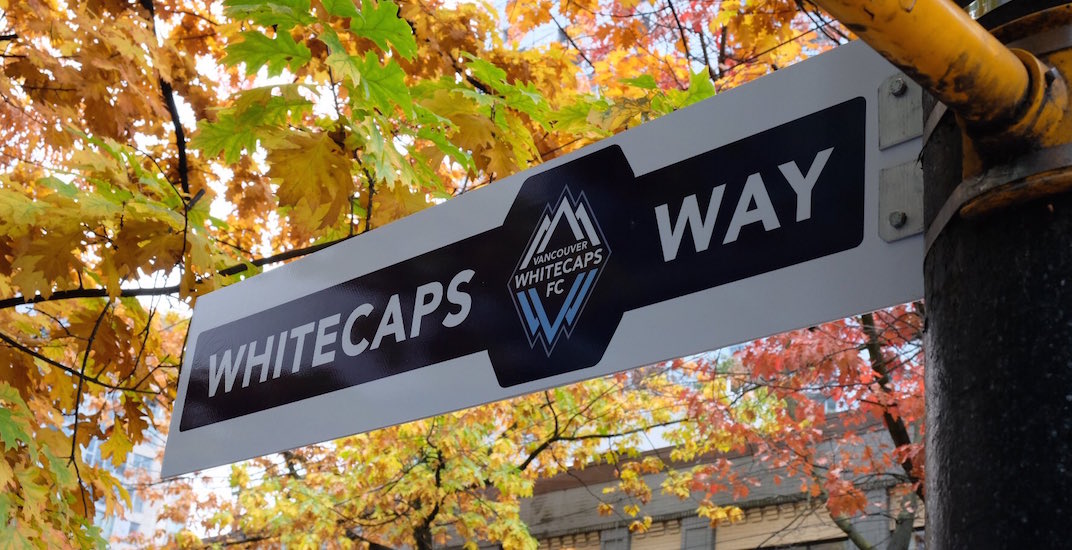 Vancouver’s most famous street is getting a new name.

As Whitecaps FC prepares to host a do-or-die playoff match against the San Jose Earthquakes at BC Place on Wednesday, Vancouver’s mayor is firmly on the bandwagon.

“It’s exciting to see Whitecaps FC enter the playoffs, for Vancouver but especially for me as a lifelong fan,” said Vancouver mayor Gregor Robertson. “Today, we honour what the Whitecaps mean to Vancouver, and celebrate what the team has accomplished so far this season. I’m looking forward to cheering on the ‘Caps with all Vancouverites as they represent Vancouver in the MLS Cup Playoffs.”

October 23 has been proclaimed as ‘Whitecaps Day’ by the City of Vancouver and a portion of Robson Street has been renamed ‘Whitecaps Way’.

“There’s a buzz of excitement around the city as the playoffs approach, and we thank the City of Vancouver and Mayor Robertson for their support,” Lenarduzzi said. “Our rally cry for the playoffs is #ForVancouver, and the team is really looking forward to making the city proud.”

Whitecaps Way now stretches from Robson and Granville to BC Place, which coincides with most of the route for the ‘march to the match’ that the Southsiders supporters group takes every game.

Robson will keep its new name for the duration of Vancouver’s run in the MLS Cup Playoffs.

#WhitecapsFC and Vancouver Mayor Gregor Robertson at the unveiling of Whitecaps Way, at Robson and Granville Street. #VWFC pic.twitter.com/Dc1l7bxwDp

Vancouver failed to win its last two games, which would have secured first place in the Western Conference – and a bye into the second round. The result is a knockout round match for the Whitecaps, who finished the regular season with a 15W-12L-7D record. They will have home field advantage against San Jose (13W-14L-7D).

There could be a larger than usual crowd for the Whitecaps (tickets available on Ticketmaster), who typically cap their home attendance at 22,120. The ‘Caps drew 27,837 fans for the only other MLS playoff game ever held at BC Place two years ago.

Should the Whitecaps win on Wednesday, that would set up a two-game series with arch rival Seattle Sounders.

That’s when the real fun could begin.