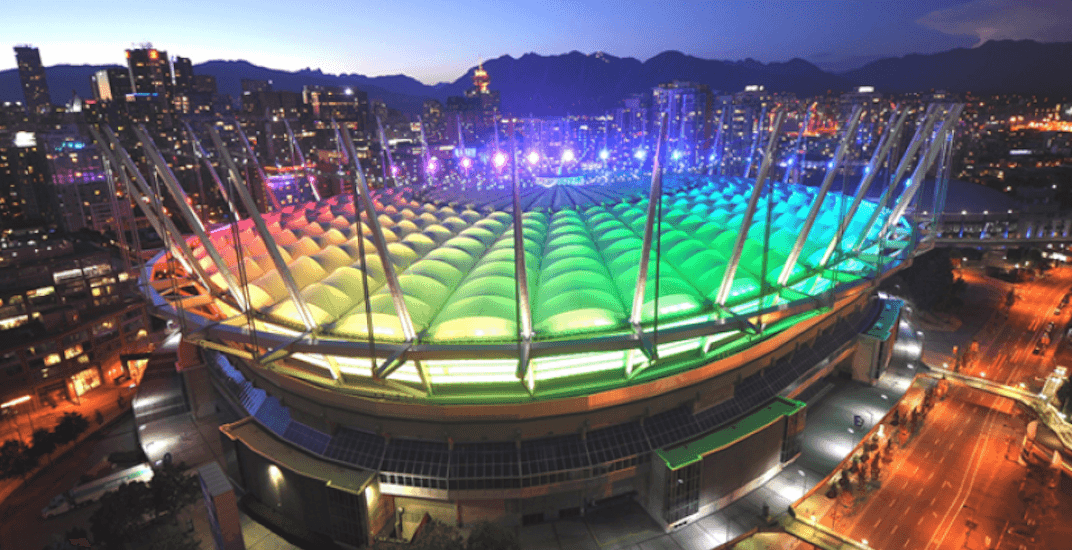 The parade has come and gone, but there’s one more event left to celebrate Pride in Vancouver this weekend.

Saturday is Pride Night at BC Place, as the Vancouver Whitecaps have planned a number of festivities for their match against the Houston Dynamo. It’s their first home game in over a month.

From rainbow LED lighting and stadium graphics to drag queen lip syncing, it’s a night where the Whitecaps remind us that soccer is for everyone.

Here’s what to expect:

Southsiders out in full force

The Whitecaps’ largest supporters group, the Southsiders have embraced this annual event over the years. Fans are encouraged to join the march to the match, which begins at Doolin’s Irish Pub at Granville and Nelson at 5:45 pm.

The Whitecaps supporters group I belong to, the @Southsiders, deployed this tifo yesterday. #UnitedWithLGBTQ pic.twitter.com/a8kuh8cdzr

Yes, they’re planning on displaying another impressive Pride tifo this year as well.

Once you’ve marched to the match, join ‘the unstoppable’ Conni Smudge, who is hosting the ‘Caps Kickoff, with demonstrations by the Terminal City Rollergirls and the Rain City Ultimate Club outside of BC Place at Terri Fox Plaza.

There will be Drag Queen lip syncing, Mizz Rikki DJ’ing, and a beer garden too.

Pride scarves and shirts are also available for purchase.

Even better? First 1,000 supporters get a complimentary pair of Pride shoelaces.

Barb Snelgrove and Angus Praught will lead the teams onto the field, where the Chor Leoni Men’s Choir will be singing the Canadian and American national anthems.

Whitecaps players wore Pride scarves last year, and the team says they have something even better planned for Saturday. Stay tuned.

Vancouver is in a tight battle in the Western Conference, in search of a return to the MLS playoffs. They trail San Jose by one point for the final playoff spot, with two games in hand.

Their opponent, Houston, have gone from worst to first. After finishing dead-last in the Conference in 2016, they are currently in a three-way tie for first in the West this year.

These two teams have met one other time this season, a 2-1 win by the Dynamo in Houston in May. Vancouver went unbeaten against Houston last year, with a 1W-0L-2D record.

The Whitecaps had a reasonably successful road trip, going 1W-1L-1D in three games. Saturday is the beginning of a large stretch of games at home, as they play six of their next seven under the retractable roof at BC Place.