The City of Vancouver is one of seven Canadian cities in the race to be a host city for the joint bid by Canada, the United States, and Mexico to host the month-long 2026 FIFA World Cup.

A long list of 46 cities across North America have been identified as potential host cities to be included in the bid plan, according to the United Bid Committee in a release today.

The other potential Canadian cities, encompassing a total of nine stadiums, are Toronto, Montreal, Ottawa, Calgary, Edmonton, and Regina.

Vancouver’s BC Place Stadium is a likely a favourite given its recent renovations and acclaimed history with hosting the 2015 FIFA Women’s World Cup championship final and a number of qualifiers for the 2018 FIFA World Cup.

Canada Soccer has previously referred BC Place as Canada’s flagship stadium, although natural grass would need to be installed in order to host the men’s tournament.

“Vancouver is a world-class host city that has successfully hosted many international sporting events including the 2010 Winter Olympics, the HSBC Rugby World Sevens Series and the 2015 FIFA Women’s World Cup,” said Vancouver Mayor Gregor Robertson in a statement.

“This is an exciting opportunity for Canadian soccer fans to show off the fantastic fan atmosphere we’ll be able to provide as a host city and be a significant boost to the economy and local businesses.”

Both Toronto and Montreal each have multiple stadiums that have been identified as potential venues, namely Rogers Centre and BMO Field in Toronto and Olympic Stadium and Saputo Stadium in Montreal.

However, Rogers Centre is not ideal as its configuration is primarily designed for baseball, and BMO Field would necessitate a 10,000 seat expansion to meet the minimum 40,000-seat FIFA requirement for the early stage matches.

Similar expansion work would also be required for Saputo Stadium, which currently only seats about 21,000.

While McMahon Stadium in Calgary has been named as another possible venue, major retrofits and a temporary seating expansion will likely be required to boost the aging venue’s condition to a world-class level.

It is unlikely a Canadian city will be a contender for the opening match and championship final as such a venue for both key matches must seat at least 80,000. But Olympic Stadium and possibly BC Place and Edmonton’s Commonwealth Stadium could potentially meet the requirements for the quarter-final and semi-final matches.

The American and Mexican competition

Seattle, just three hours south of Vancouver, has its 72,000-seat CenturyLink Field, which is the home of the NFL Seattle Seahawks.

However, only three stadiums in three Mexican cities – Mexico City, Guadalajara, and Monterrey – have been identified as suitable candidates.

At least 12 cities will be selected as Official Host Cities

Only a small fraction of these identified cities will become Official Host Cities of the tournament, if it is awarded to the United Bid.

The bid committee says it plans to include between 20 and 25 venues in its final bid, and it anticipates FIFA will allow at least 12 locations to become Official Host Cities. A shortlist of cities and stadiums for inclusion in the bid will be made next month in advance of FIFA’s bid submission deadline on March 16, 2018.

“Official Host Cities included in the bid will be critical to the successful United Bid of Canada, Mexico and the United States to host the 2026 FIFA World Cup and we look forward to working with all levels of government and our stakeholders to find the best possible candidate cities in Canada,” said Peter Montopoli, Canada Bid Director and Canada Soccer General Secretary.

“The 2026 FIFA World Cup is an incredible opportunity for our country to develop the men’s game and ensure that Canada continues as a leading soccer nation for the next generation.”

The joint North American bid is widely deemed as a favourite to win as the only competitor is Morocco. The deadline for bids to submit their interest was on Monday, and the winning bid will be decided at the FIFA Congress in June 2018. 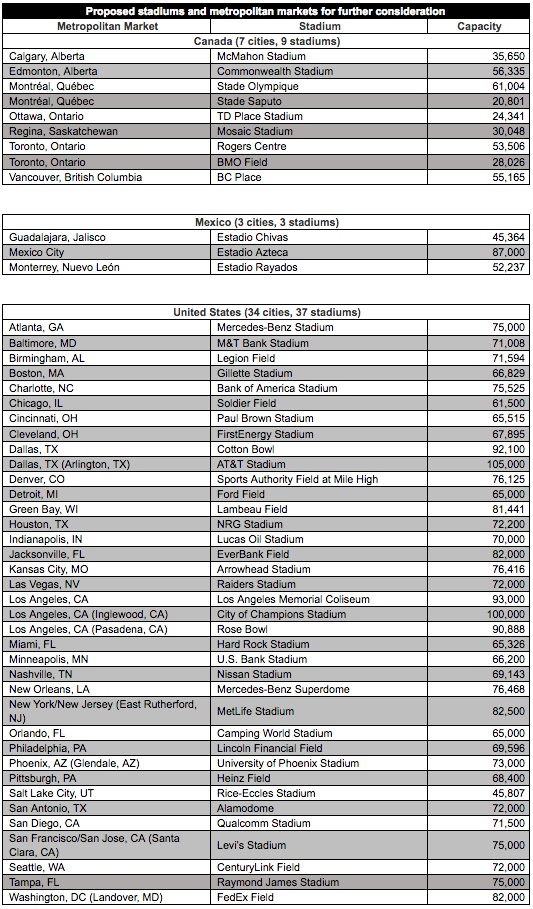 List of cities and stadiums identified for the potential inclusion into the United Bid by Canada, USA, and Mexico to host the 2026 FIFA World Cup. (United Bid Committee)