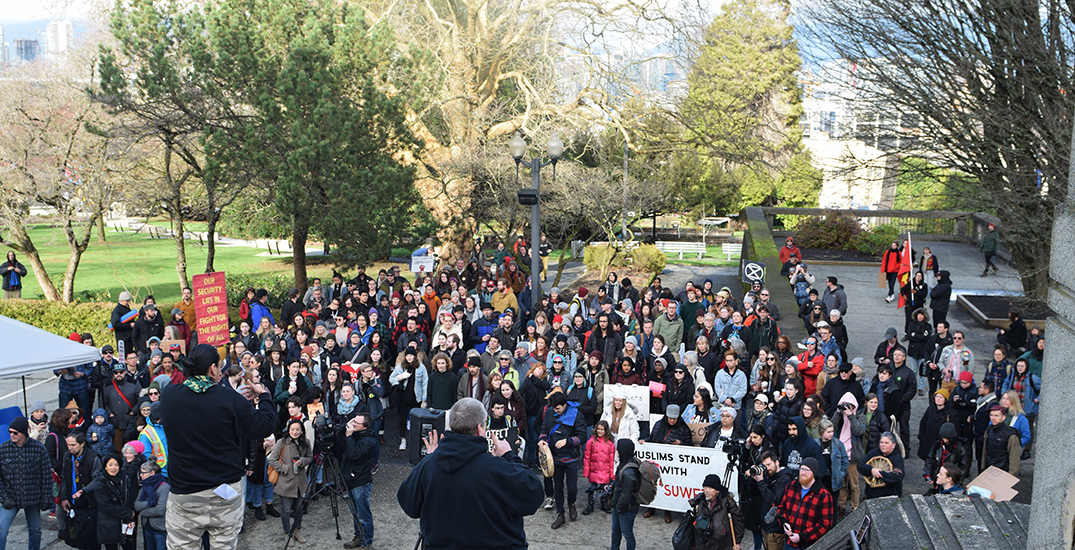 Hundreds of people joined a rally Sunday afternoon at Vancouver City Hall supporting Indigenous leaders who are fighting a gas pipeline in northern BC.

Demonstrators want to see Mounties stand down in Wet’suwet’en territory, and for provincial and federal leaders to meet with the hereditary chiefs who oppose a Coastal GasLink liquified natural gas pipeline that will cross their traditional territory.

At the same time, another group of demonstrators blocked access to DeltaPort, the busiest port in Canada, in another signal of solidarity.

ILWU Local 502 approached our barricade with a message of solidarity and told us they will not cross our picket line. There would normally be 300 workers at the Deltaport, but not today – the port is closed!#DeltaportBlockade #WetsuwetenStrong #ShutDownCanada pic.twitter.com/H45PRNQ2I6

In northern BC, Wet’suwet’en leaders opposed to the pipeline and their allies have set up camp along the construction route. But in recent days, Mounties have been arresting and forcibly removing people to enforce a court injunction for the gas company to continue construction.

“The RCMP are the ones trespassing on the Wet’suwet’en lands,” said Chief Judy Wilson (Kukpi7) of the Neskonlith First Nation, who attended the rally.

“They are saying that the Wet’suwet’en are violating the injunction, but in reality it’s [the government] violating human rights and violating the land rights title holders.”

The Wet’suwet’en people traditionally followed a clan system of governance, with hereditary chiefs as leaders, Wilson explained. But during colonization, when Indigenous people were moved onto reserves, the federal government’s Indian Act set up an alternate system of governance using band councils and elected chiefs.

Many elected chiefs have signed on to the pipeline project, but the hereditary chiefs involved in pipeline resistance say they’re the ones who need to give consent for the project to cross Wet’suwet’en territory.

“It’s a very neocolonial approach to resource extraction where Indigenous people, regardless or our … rights, are simply, at gunpoint, pushed off our lands and territories,” Phillip told Daily Hive.

On Saturday, Mounties arrested eleven more people along Morice West Forest Service Road in northern BC who refused to leave the RCMP’s exclusion zone, an area meant to be clear of opposition for pipeline work to continue.