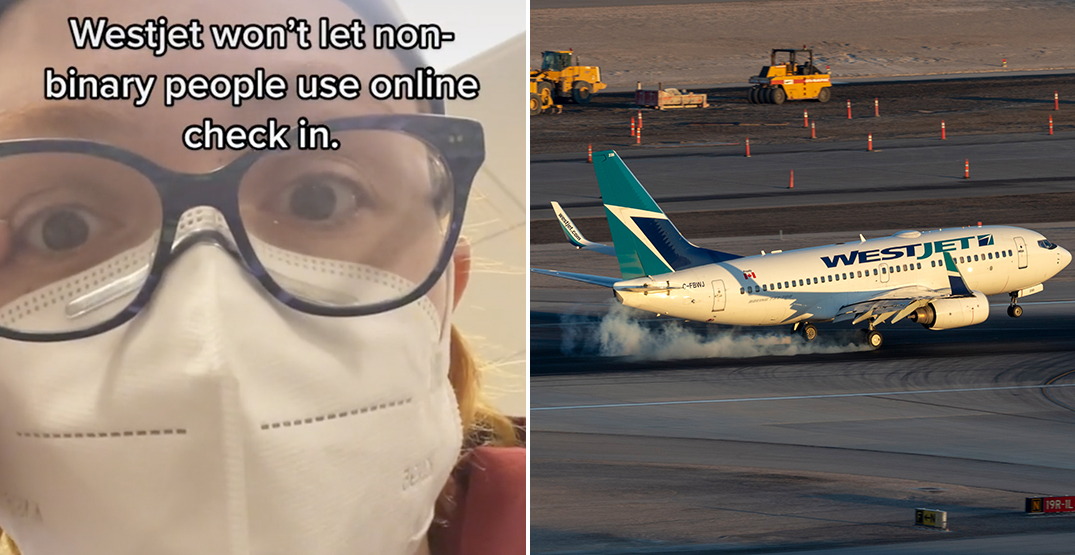 WestJet is under fire for forcing transgender travellers to identify as male or female when checking in online.

Iz Lloyd, who uses they/them pronouns, posted a series of TikToks slamming the airline for what they call a “problematic” online check-in process. Some of the videos have garnered over 300,000 views with other members of the trans community sharing their own stories.

“The big thing is that WestJet is just ignoring us,” Lloyd said. “They’re pretending we don’t exist.”

The Nova Scotia resident detailed their experience in an interview with Daily Hive. They explained that they saw four options for inputting gender on WestJet’s online check-in form: male, female, unspecified and undisclosed.

@queermafia This happened on 4 flights. 4 different flights, until I misgendered myself on the 5th one. #westjet #cbc #trans #torontopearsonairport #flyingwhiletrans ♬ original sound – Iz

Lloyd says that during the pandemic, they came out as non-binary, so they changed their passport info to reflect that, using gender X under the sex field.

However, whenever they selected “unspecified” or “undisclosed” in the drop down menu of the WestJet form, they received error messages. This happened multiple times for multiple flights.

“I legitimately just assumed I was having issues because they needed to see my vaccine documents,” they said. “I had many excuses I was making for them for why this was happening. But the people I was traveling with who were on a different airline or flying at a different time [said] they didn’t have any of those issues.”

Finally, before a flight out of Calgary on May 26, Lloyd resorted to selecting the gender they were assigned to at birth, and it worked.

Confused by this, they decided to ask the WestJet customer service desk at the Calgary International Airport why this was happening. Lloyd was shocked at the information desk’s response.

“They were like, ‘Oh, that’s by design. That’s what it’s supposed to be…if you aren’t marking male or female, it forces you to check-in in person, so that the gate agent can determine the gender they think you are, and assign it that way,'” Lloyd recalled them saying.

They also had a conversation with a WestJet customer service representative over the phone and got an equally troubling response from the company.

According to Lloyd, the representative said that “the only error made was that the agent told you about the policy because we’re supposed to do it and not say anything.”

Lloyd was appalled at the representative’s admission especially since the airline has been posting about Pride month on social media.

Happy #Pride month! We’re excited to celebrate and stand with our LGBTQ2S+ WestJetters, guests, and the community as we proudly embrace an open and inclusive culture that is a welcoming space for all. 🏳️‍🌈

A WestJet spokesperson provided a statement about the situation to Daily Hive on Wednesday, which has since been made public.

“At WestJet, it is our commitment to ensure our guests have an equitable travel experience and we owe a further explanation and apology regarding our progress on adding non-binary options to our booking and check-in systems,” it reads.

Since 2019, Canadians have been allowed to identify as gender X on their passports. WestJet says they welcomed this and committed to updating their technology and systems to accommodate non-binary travellers.

It was supposed to take roughly one year to implement these changes, but the Calgary-based company says they experienced several setbacks due to the pandemic.

“We are disappointed that we have not been able to deliver upon our commitment in the timeframe we expected, and that the implementation has been delayed,” stated WestJet.

The company says it’s working to include gender X on its reservation systems by the end of 2022.

How this affects the trans community

Lloyd says the statement is just another excuse and that the company is three years too late in updating its system.

Others in the non-binary community have been asking WestJet to include a gender neutral option on their forms for years. 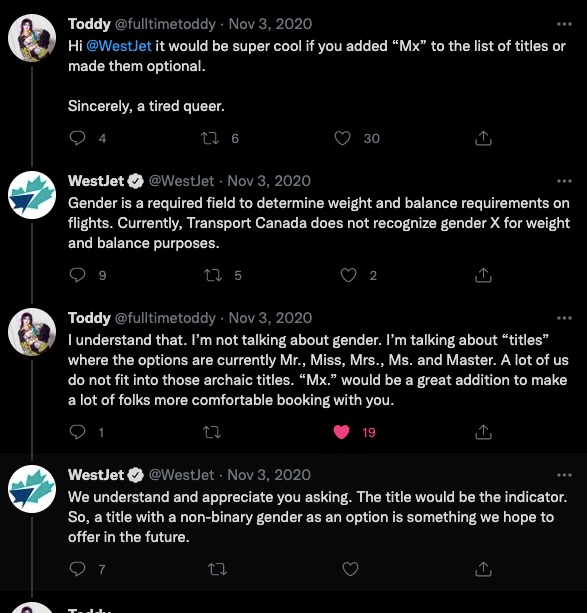 Many have also reached out to Lloyd saying that they’ve experienced similar situations. In an extreme case, one person told Lloyd that they had to get airport security to help because WestJet wouldn’t let them board because of their incorrect documents.

Lloyd also says this issue is deters trans folks who have to travel across the province to get gender affirming surgeries.

Marcus McCan, a human rights lawyer based in Toronto, says non-binary people are protected under the Canadian Human Rights act.

“Requiring somebody to provide gender information, as a form of confirmation of identity is an invitation for the staff at that organization to then police people’s gender presentation, essentially,” he said.

“It makes perfect sense that that the trans community would be would be nervous about submitting themselves to scrutiny in that way given the history.”

In 2017, the federal government amended the act to add gender identity and gender expression to the list of prohibited grounds for discrimination.

“The smallest incremental change that would satisfy [WestJet’s] obligation not to discriminate would be to just add a third category, or more for gender,” McCan explained.

Lloyd says that a group of trans people, advocates and allies are in talks with a legal firm about how to address this issue with WestJet. The group is currently trying to get in touch with Minister of Transport Omar Alghabra.

In an email to Daily Hive, Alghabra’s office said that Transport Canada does not regulate the online check-in process of air operators. They did explain the government’s regulations for maximum weight on an aircraft, stating that it includes the weight for passengers identifying as gender X.

McCan says that airlines are federally regulated, so Lloyd and their group would file a complaint with the Canadian Human Rights Commission.

As for what Lloyd and the trans community hope to get from taking legal action?