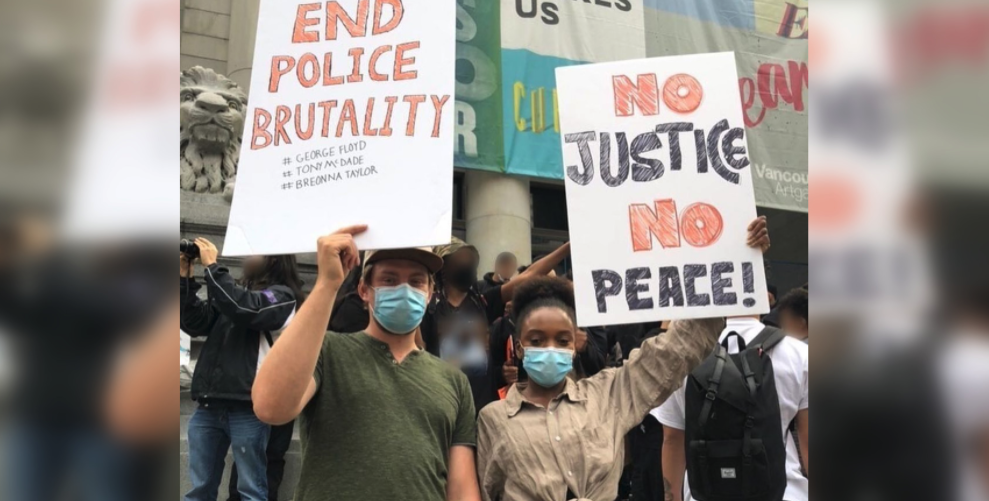 A West Vancouver woman is speaking out after a negative interaction with a bus driver prior to an anti-racism protest in Vancouver last month.

Marion Aregheore says she and her boyfriend were trying to board a bus in West Vancouver for the May 31 protest, when the bus driver said he could not let them on because their signs had sticks attached to them.

“When he stopped … he didn’t open the back doors to let us on. He kind of poked his head out of the front door and he was like, ‘I can’t let you on the bus… The stick on your sign can be used as a weapon,” Aregheore recalled in an interview with Daily Hive.

“We walked over to the front to talk to him about it, and we were like, ‘We’re going to a peaceful protest… We don’t plan on attacking anybody, we just need the stick to hold up our sign because that makes our life a lot easier.”

Aregheore said the bus driver was “not cooperating” when she and her boyfriend tried to reason with him.

“We were like, ‘Okay, if the sticks are the problem, we can take the sticks off,” she added.

“That’s when he was like, ‘Well, I still can’t let you board the bus on the front.’ But the way he said it was very aggressive, which led me to believe … it’s not even the sign, maybe he just feels a way that we are protesters trying to get downtown.”

“As my boyfriend was walking to the back door, [the driver] started to shut the door on me as I was still standing in the doorway, to the point where my arm and my leg were trapped between the door,” Aregheore noted.

“There was a woman who was walking by who witnessed the encounter, and she started yelling at him asking him what he’s doing, why he’s trying to prevent us from going to the protest.”

Aregheore says she feels the entire encounter was unnecessary because she was complying with the driver’s requests.

“I was also asking him why that was necessary … to shut the door when he could have simply asked me to get on the bus. I didn’t think there was any need for force in that situation,” she said.

“I don’t see why this had to be a big problem. I think that it was some kind of prejudice just because the way the situation was handled. He could have very calmly asked us to get off the bus and we would have complied, just like we were complying with our sticks.”

Aregheore shared her experience on her Instagram page, and it was met with hundreds of responses — some condemning the bus driver and some sharing similar experiences of racism aboard public transit in Metro Vancouver.

“I’ve been in other situations where someone has acted with prejudice towards me because of my race, and it’s very passive-aggressive to the point where people don’t understand that sort of treatment.”

The District of West Vancouver, which is responsible for operating Blue Bus in West Vancouver as TransLink’s contractor, reached out to Aregheore after the incident to apologize.

She says the mayor of West Vancouver personally called her after seeing her Instagram post to apologize and say that they are investigating.

According to Donna Powers, Director of Community Relations and Communications, the District of West Vancouver takes situations like these “very seriously.”

“As soon as the mayor heard about the incident, she called her to see how she was doing. It’s a serious thing and West Vancouver takes it very seriously, and we are conducting an investigation,” said Powers in an interview with Daily Hive.

“We are dedicated to making sure our public services are safe and welcoming for everyone, so we are following a process set out by the collective agreement for the transit operator, and the next step will be an investigation meeting with the bus driver while he has union representation.”

The bus operator involved in the incident is an employee of the district of West Vancouver, which trains, recruits, and manages its own bus operators.

“We will be following up as firmly and as clearly as we can and ensuring that all employees understand what is expected of them in terms of customer service as well as providing a safe and inclusive environment,” said Powers.

I was extremely disappointed to hear about a black woman’s recent distressing experience with a West Vancouver bus driver as she was travelling by Blue Bus from West Vancouver to the Anti-Racism protest in downtown Vancouver on May 31.

I’ve spoken to the customer, and what she experienced was painful, offensive, and wrong.

As an employer, we are responsible for ensuring that our employees have the tools and information they need to provide positive and respectful service to the public. Racism has absolutely no place in West Vancouver, and we commit to providing anti-racism training to all of our employees, including those at Blue Bus.

This incident is an opportunity to make things better. I thank the customer for having the courage to speak up, and providing us with the chance to do the right thing.

On behalf of the District of West Vancouver I apologize, and want to assure her that this matter will be fully investigated and appropriate actions taken.

Translink’s CEO also responded to a request for comment, stating that they, too, have been made aware of the incident and got in touch with Aregheore.

“I have recently been made aware of a concerning interaction between a West Vancouver Blue Bus operator and a customer,” said Translink CEO Kevin Desmond in a statement to Daily Hive.

“Based on conversations I’ve had with the customer and the District of West Vancouver, what the customer experienced was inappropriate and deplorable.”

Desmond affirmed that racism “has no place” on Metro Vancouver’s transit system.

“I have spoken to the customer and on behalf of the public transit community in Metro Vancouver, apologized for the pain this incident has caused her. I have also spoken to the Mayor of West Vancouver, who has assured me that this incident will be fully investigated, and appropriate actions taken,” he added.

“I want to be abundantly clear that racism has absolutely no place on Metro Vancouver’s transit system and should not be tolerated under any circumstance.”