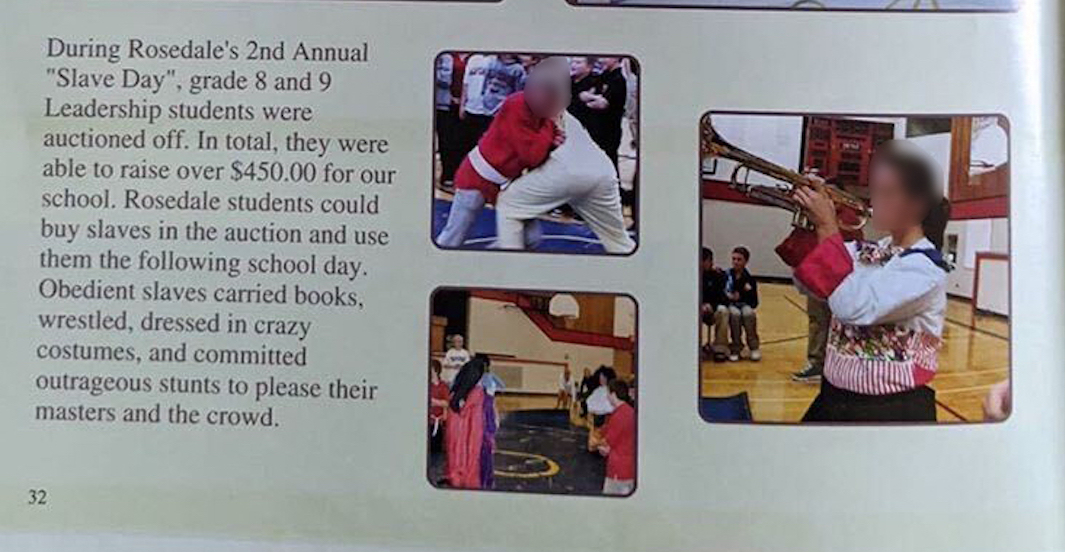 A Chilliwack middle school has apologized for hosting “slave auctions,” dating back as far as 2007.

Layla Mohammed, a Black student who attended Rosedale Traditional School in Chilliwack (formerly known as Rosedale Middle School), told Daily Hive in an interview that her memory of the incident was triggered by another story of anti-Black racism in a different Chilliwack school, where an image of a student in Blackface was published in the 2017 yearbook.

According to Mohammed, for all three years of middle school, students were “sold” at an annual assembly planned by the yearly Leadership class during the school’s spirit week during what was called “Slave Day.”

“If you were sold as a slave, you had to do everything that your slave owner told you to do, so it was like a prank — it was entertainment,” said Mohammed.

“The students who were slaves would stand on the stage, and all the teachers were the people who could purchase them,” Mohammed furthered. “They would be at a panel, and they would bid for whatever student they wanted to buy, and then that money was donated to whatever cause they were doing that month or that week.”

One memory that is imprinted on Mohammed’s mind is when a teacher put a leash on one of the “slaves” and paraded them in front of students.

“The teacher decided to get the kid to wear a collar and a leash and have them walk like a dog down the hallway while everybody was laughing, and that is an image that I remember and it was actually because of [that] article that I thought about it,” said Mohammed. “I completely suppressed the memory, totally forgot about it.”

The students who were “sold” would also do tasks for teachers, said Mohammed.

Images of the event were published in the school’s yearbook with the following caption:

“During Rosedale’s 2nd Annual ‘Slave Day’ grade 8 and 9 Leadership students were auctioned off. In total, they were able to raise over $450.00 for our school. Rosedale students could buy slaves in the auction and use them the following school day. Obedient slaves carried books, wrestled, dressed in crazy costumes, and committed outrageous stunts to please their masters and the crowd.” 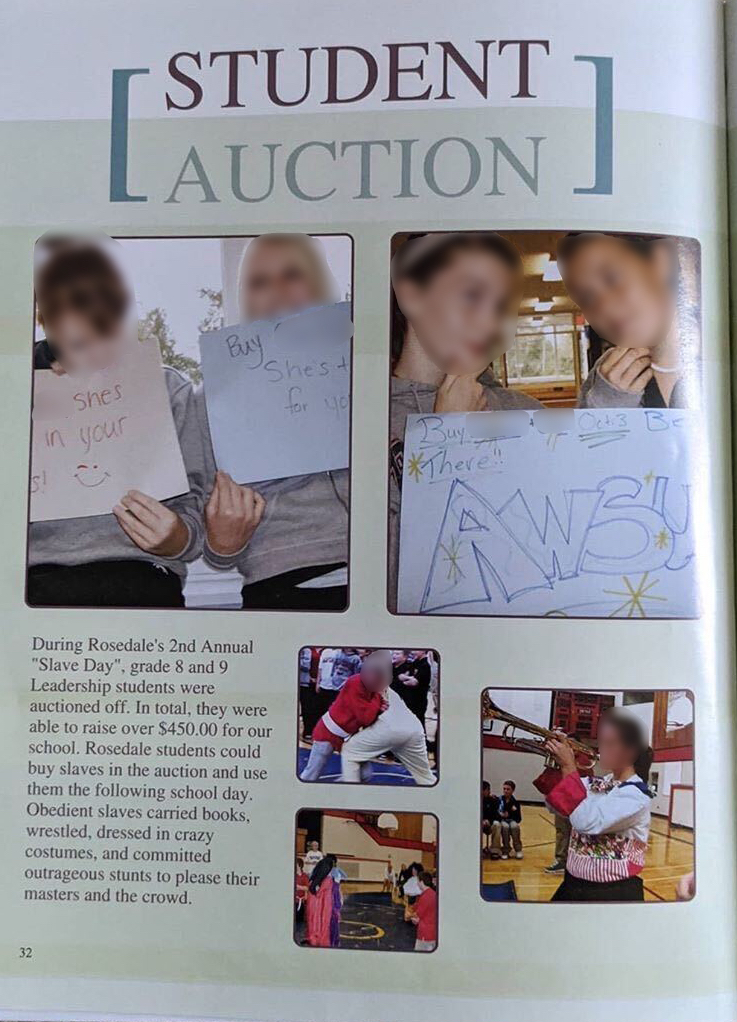 Mohammed says when she was younger, she couldn’t fully grasp what was happening, and as one of a handful of Black students, she was afraid to say something.

“When I think back, I just remember more and more, and I remember that I thought that it was kind of weird, because I definitely knew I was a Black person and that our people were enslaved. It was a part of history,” said Mohammed.

Mohammed said she told her dad about the incident.

“He was upset, and he wanted to say something, but I asked him not to, because I didn’t want anyone to not like me. Looking back, when you’re a kid you don’t know better, and you shouldn’t have to be in those situations.”

Mohammed said she wants the school to take accountability for what happened so that other Black students at the school don’t have the same experience.

“I really need them to do better for other young Black kids growing up there,” she added.

“They should publicly acknowledge that it happened, and then publicly apologize and pledge to actively do better — that would be a good stepping stone for them. And then also just calling out any kind of discrimination that they might have within their own school, like hiring systems or within their staff, or how they treat certain students that should be addressed.”

“Under the guise of school fundraising, students in the Leadership class (myself included) would volunteer to be auctioned off to teachers or other students to be their ‘slave’ for the course of a school day,” said Amanda Keriliuk, who attended the school 2007 to 2009.

“There were many instances where these students were made to perform humiliating and degrading tasks, such as being paraded around on leashes, or only being allowed to crawl through the halls,” she said.

“This kind of behaviour was/is abhorrent and the teachers not only allowed it, but often participated. They had a responsibility to speak up and recognize that this kind of ‘fundraiser’ was wildly inappropriate and insensitive, especially considering our education re: slavery was non-existent.”

Keriliuk said she feels “that it is important that we acknowledge these shortcomings and hold our educators accountable so that past, present, and future students can feel safe in their learning environment.”

Another student, who asked to remain anonymous, said that the event seemed akin to “Sports Day.”

“All I can remember is that it was a large event in the school gym, and each student or teacher that was ‘for sale’ stood on the gymnasium stage while a teacher/administrator acted as an auctioneer, noting features or tasks the person was willing to do if they were purchased,” the student said.

Makayla Robertson, a student who attended Rosedale from 2008 to 2011, said she, too, recalls Slave Day.

“The teacher would ‘buy’ the students. One teacher would even make their student wear a collar and crawl on the floor. They really need to acknowledge that they did this, and just how insensitive and offensive it is to their students and their families,” she said.

When asked for comment by Daily Hive, the school didn’t explicitly reference Slave Day but said, “The event at Rosedale was wrong today, it was wrong then.”

In a statement, the district said, “We don’t have all the answers. We make mistakes. And we need to learn from them. The event at Rosedale was wrong today, it was wrong then. We take responsibility for that and I unreservedly apologize on behalf of the District for that event,” said Rohan Arul-pragasam, Interim Superintendent of the Chilliwack School District.

“As a School District, we have a special responsibility. We, along with families, are charged with instilling in our students the values of respect for diversity, inclusion, tolerance, and the inherent human dignity of every person. We are expected to, and must, lead by example. You have my commitment that I will be doing my best to make that happen.

Below is a copy of the statement in full: 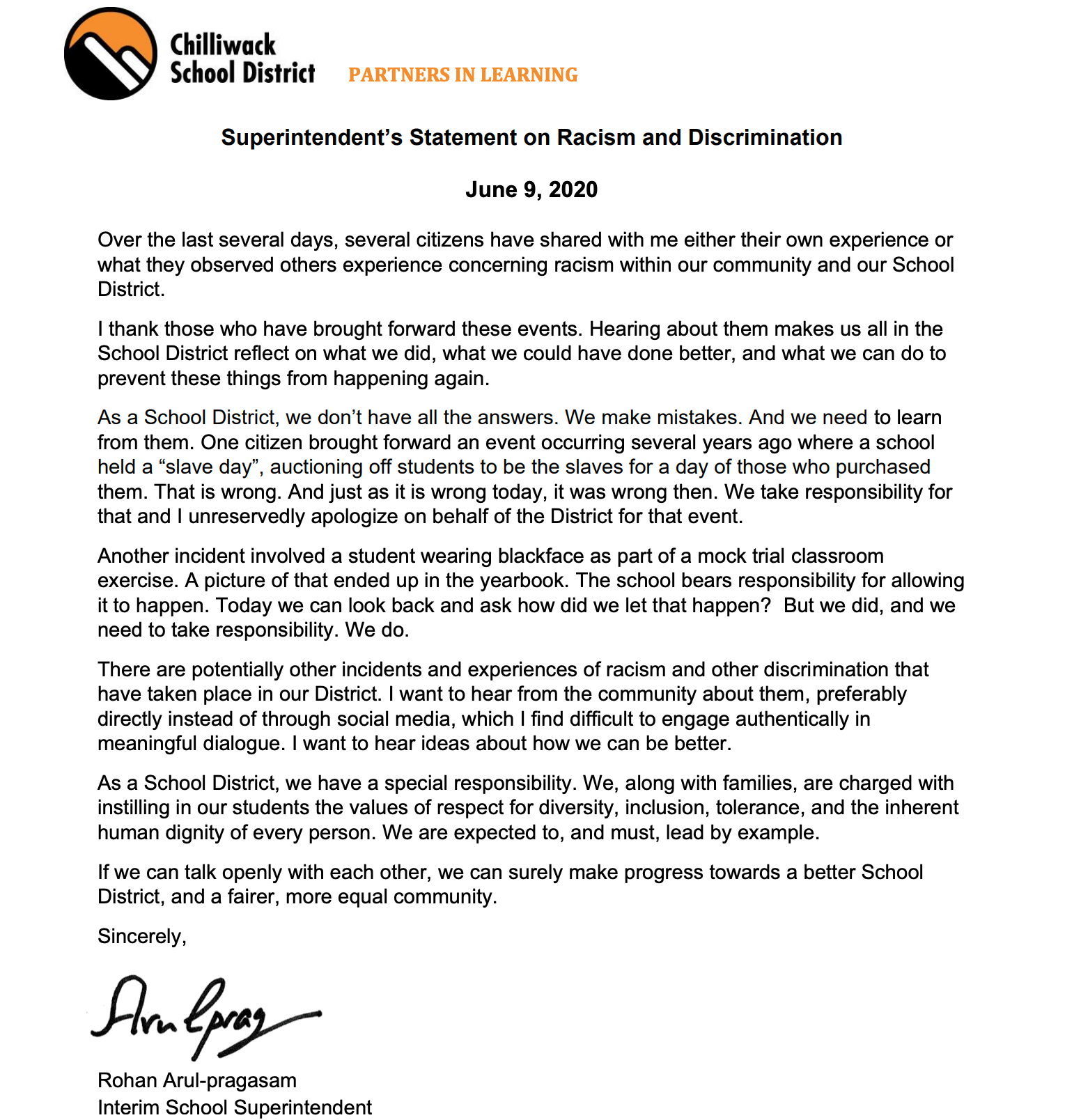