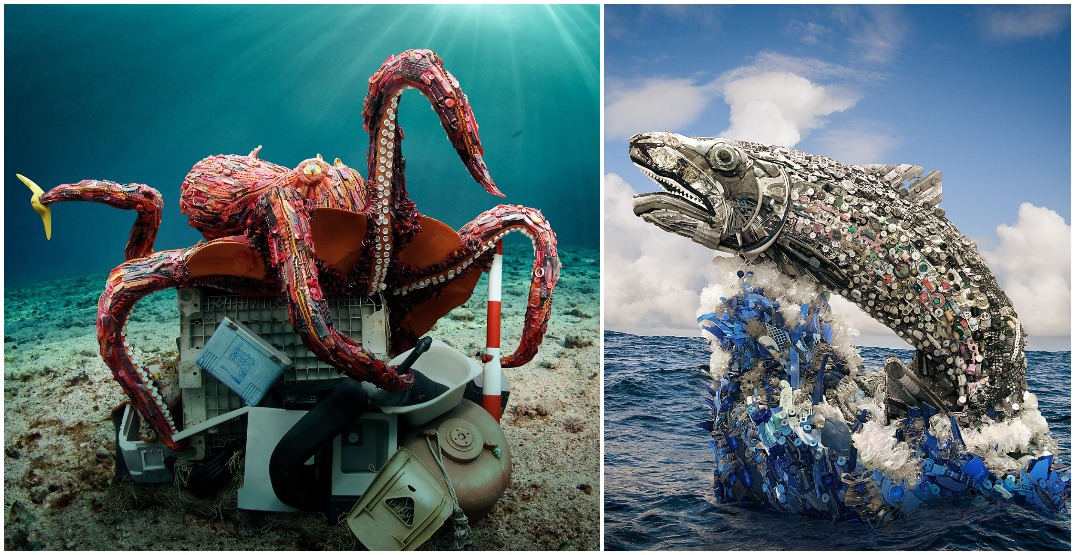 At Metrotown for a limited time starting February 23, enormous sea turtles, whales, and fish will burst from the earth or water as part of an exhibit called Washed Ashore.

From far away, they’re nothing more than nine beautiful, glittering sculptures. But up close, there’s more to the design: each piece is made entirely of garbage pulled out of the ocean, primarily plastics and metals that don’t deteriorate with time.

Instead, this debris poses a risk to marine animals and the ecosystems they rely on.

Have you seen @WashedAshoreArt ? They also create sculptures from ocean plastics. We really have trashed this planet. pic.twitter.com/fELsIYUA2F

The exhibit came to Burnaby’s busiest mall, Metrotown, to make a statement to shoppers passing by.

For the lead artist, Steve Wright, reaching people is the best part. They built all the sculptures by hand and travelled with the exhibits, setting up and taking them down each time.

Most of their work takes place in Oregon, where they’ve retrieved over 35 tonnes of marine debris and trash. Wright made 86 sculptures out of that material, some of which are in Burnaby this month.

Washed Ashore Art is a non-profit organization committed to educating the public to the reality of ocean pollution through their traveling exhibit of massive sculptures made entirely from plastic marine debris. https://t.co/fTqrUDFSef #beachtrashart @WashedAshoreArt pic.twitter.com/gLH95WBByV

“I’ve got to speak with some of the local people that have been coming to look over the fence so far, and we’re getting good reactions,” they say.

“There have been some artists walking through the mall that have come over and some of them actually showed me their artwork that they made, so it’s kind of neat.”

They say their sculptures need to be large enough that people can’t ignore them.

In case the #IPCC report wasn’t clear enough, the time to act is now. pic.twitter.com/JdEnI9UzH0

At Metrotown, visitors can spot Octavia the Octopus, weighing in at 1,200 pounds, and Grace the Humpback Whale Tail, which is 10 feet high and 12 feet long. The tail sculpture alone is 1,800 pounds.

“It’s much more impactful when you see such a large sculpture that’s been made out of plastic picked up off our beaches and out of our oceans,” says Wright.

“It’s just more dramatic when you see that amount of trash. Even though they’re beautiful, it is still pollution out of the ocean.”

The artist hopes onlookers are inspired to think more critically about their own relationship to plastic and marine debris after seeing “Washed Ashore.”

“When they see plastic water bottles just plastered all over these, maybe you get a metal water bottle you can reuse or a reusable bag when you go shopping, not using plastic bags, but just taking your own things that aren’t single-use plastics,” they say.

It’s only their second time displaying their work in Canada, but the exhibit has been shown in all sorts of places, from the Smithsonian’s National Zoo to the Kelly Clarkson Show.

Brad Parks, Conservation Education Director for the project, says one unique thing about showing the exhibit in Metrotown is that it’s free and open to the public.

We are thrilled to introduce you to the newest member of our team. Please welcome Brad Parks, our new Director of Conservation Education to the Washed Ashore community! pic.twitter.com/dA6k3b2uB9

That’s pretty unusual, considering the travelling show is often accessible by paid ticket only in venues like aquariums and zoos. They’ve even been to the UK.

“While it doesn’t open until tomorrow, the response has been incredible already, with folks coming down the escalator with their cameras recording the grand court exhibition,” says Parks.

“As people get the chance to actually come in and explore the sculptures up close, it’ll be even more exciting.”

Art To Save The Sea!
We’re loving these fabulous sculptures made from plastic waste collected from the sea via @WashedAshoreArt

As a collective focused on ocean conservation through art, they’re happy to answer any questions visitors have.