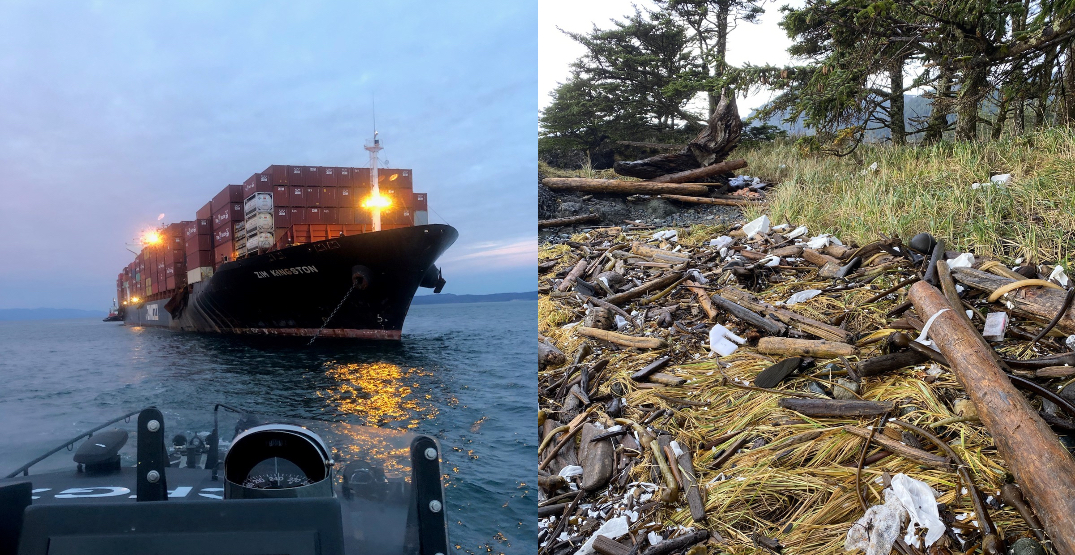 A container ship on BC’s coast is finally headed to port after a harrowing couple of months.

The vessel M/V Zim Kingston was en-route to Vancouver from South Korea when it lost containers at sea late in October.

Then, there was a fire inside some of the onboard containers. Since then, some of the containers, including tonnes of debris, washed up onshore, and clean-up efforts yielded up to 71 refrigerators, 81 bags of styrofoam, and more.

On Friday, December 3, the ship is going to Nanaimo where the port authority will offload the ship’s damaged containers.

While four beached containers were found, there are still 105 missing that are believed to have sunk. Working with the ship’s owner, the Coast Guard has plans to do sonar scanning in the area where the containers went overboard.

The #ZimKingston remains at Constance Bank, #Victoria. The decision on when to proceed with transit will be determined by the ship’s Master and the assigned #BritishColumbia Coast marine pilot, and take into account weather and other conditions

The Canadian Coast Guard has been overseeing container debris and beach clean-up. Now, there’s still one site in the final stages of clean-up.

In total, there were 27,360 kilograms of debris cleaned up from beaches to date, not including what’s still at the final clean-up site.

Moving forward, the ship’s owner and the coast guard will continue to check the “known accumulation sites for debris,” monitoring the shores for trash when they’re conducting overflights in the area.

#CCGLive: The #ZimKingston will transit today to the Nanaimo Port Authority to offload the damaged containers. pic.twitter.com/wUGJntviCZ

As for the ship, it’s is on its way to the Port of Nanaimo. The journey is expected to take 11 hours, and it will be slow going through normal shipping lanes. It will also be joined by a parade of vessels including:

If you see marine debris that you think could be from the Zim Kingston ship, you can report it to the Canadian Coast Guard at 1-800-889-8852.

#CCGLive – A Coast Guard overflight of the #ZimKingston at 11:30 today shows smoldering but no visible flames in the containers. However, firefighters may find some active fire in the containers once they are able to board the ship. pic.twitter.com/PHjfjf6Fg7

You can see the full thread detailing the Coast Guard’s work on the Zim Kingston ship with more photos and videos on Twitter.