The effort was led by Vancouver Aquarium Head Veterinarian Dr. Martin Haulena — one of only a few veterinarians in the world, and the only one in Canada, who has experience immobilizing sea lions with an anesthetic drug delivered by a dart.

“Rescue efforts involving sea lions are extremely challenging and can be very dangerous,” said
Dr. Haulena. Marine mammal anesthesia is risky; it was a 15-year process to develop an effective combination of drugs and protocols to safely dart sea lions for the removal of entangled gear, usually around their necks. Last fall, Dr. Haulena and marine mammal consulting biologist Wendy Szaniszlo, along with a large Vancouver Aquarium crew, whale watch operator Brian Gisborne, DFO, and Parks Canada, successfully disentangled two animals for the first time in the Barkley-Clayoquot region. 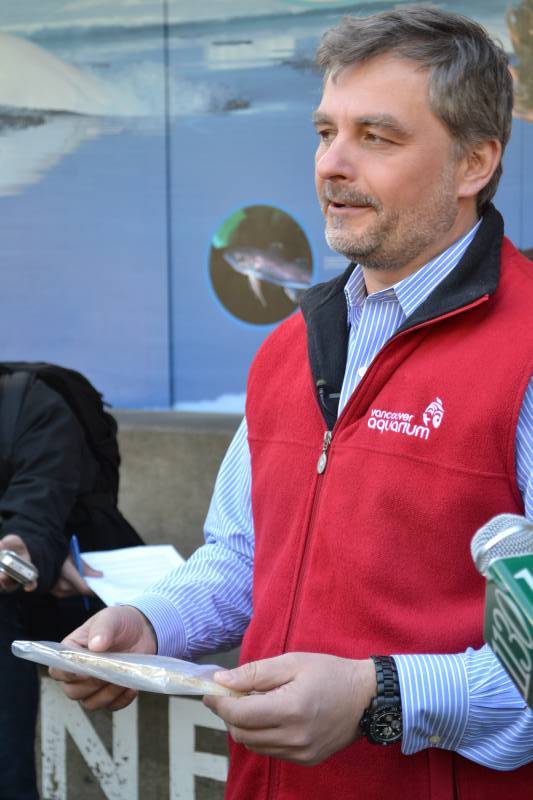 The rescues are resource-intense, often take place in remote locations and, because they require the right team, equipment and weather conditions, take time to coordinate. On this trip, the team was hoping to rescue a California sea lion recently spotted in Fanny Bay by members of the public, appearing to suffer from strapping, fishing gear or marine debris wrapped tightly around its neck, as well as several other animals with similar entanglements — both California and Steller sea lions — spotted on log booms and haul-outs in the area.

Over the two full days of the rescue operation, the team successfully immobilized two animals, including one adult male California sea lion suffering from an entanglement and deep wound on his neck. The team managed to tranquilize him as he rested on a log boom, then climbed on the log bundle themselves and disentangled the material from his neck as he slept.

“This particular sea lion was the unsuspecting victim of plastic packing strap tightly wound around its neck. This is often what we find on them — it’s the perfect size for them to swim into and difficult for them to dislodge themselves,” said Dr. Haulena. “It’s a good reminder for all of us to not throw debris into our waterways as careless behaviour can directly impact marine animals, which can result in permanent injuries and death.” 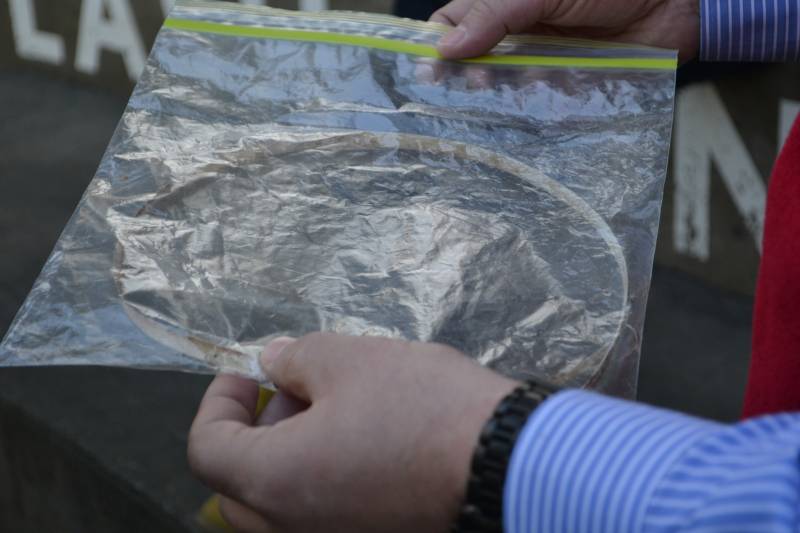 The rescue trip wouldn’t have been possible without the extraordinary efforts made by DFO officers, and thanks also go to the operators of the yard where the Aquarium’s Rescue Centre team did the disentanglement; the boom boat operators and yard staff were exceptionally accommodating.

Unfortunately, the sea lion rescued this week is not alone in its injuries, but the Aquarium cautions that sea lions are large, wild animals and rescues should not be attempted by the public. If you see a marine mammal in distress, call Vancouver Aquarium’s Marine Mammal Rescue Centre at 604 258 SEAL (7325) or Fisheries and Oceans Canada at 1 800 465 4336.

“Concerned citizens who are calling in about marine animals in distress are taking the right steps,” adds Dr. Haulena. “It’s important that people do not try to handle them. Improper removal of entangled gear may make the injury worse as vital structures, such as veins, arteries and nerves lie in close proximity to the entanglements.”

The Aquarium also reminds the public to not dispose of debris into our rivers, lakes and oceans. Shoreline debris can often be confused by marine animals as food or they may become entangled. For members of the public wanting to get involved in protecting marine wildlife by keeping shorelines free of litter, register to clean a shoreline today at www.shorelinecleanup.ca. 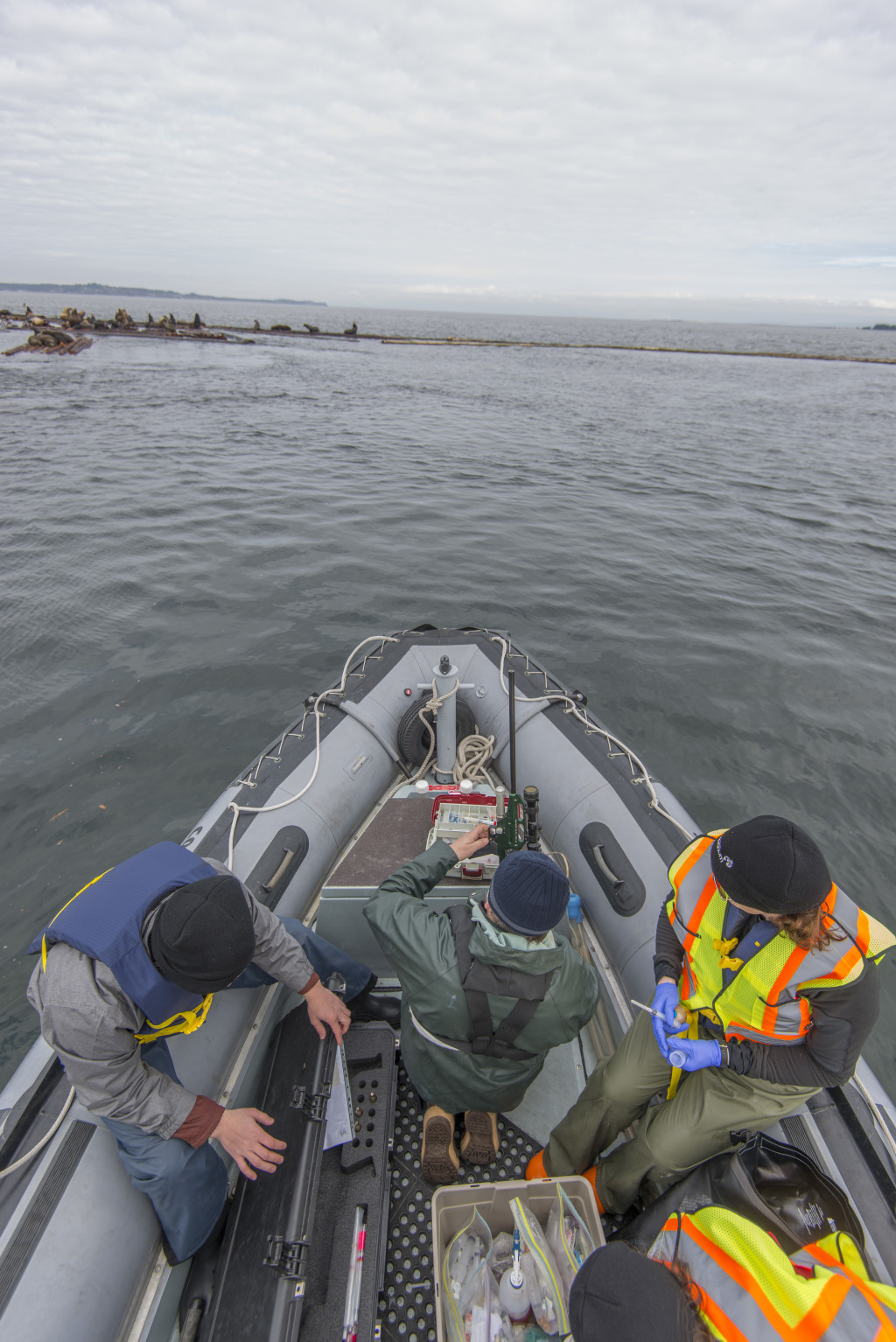 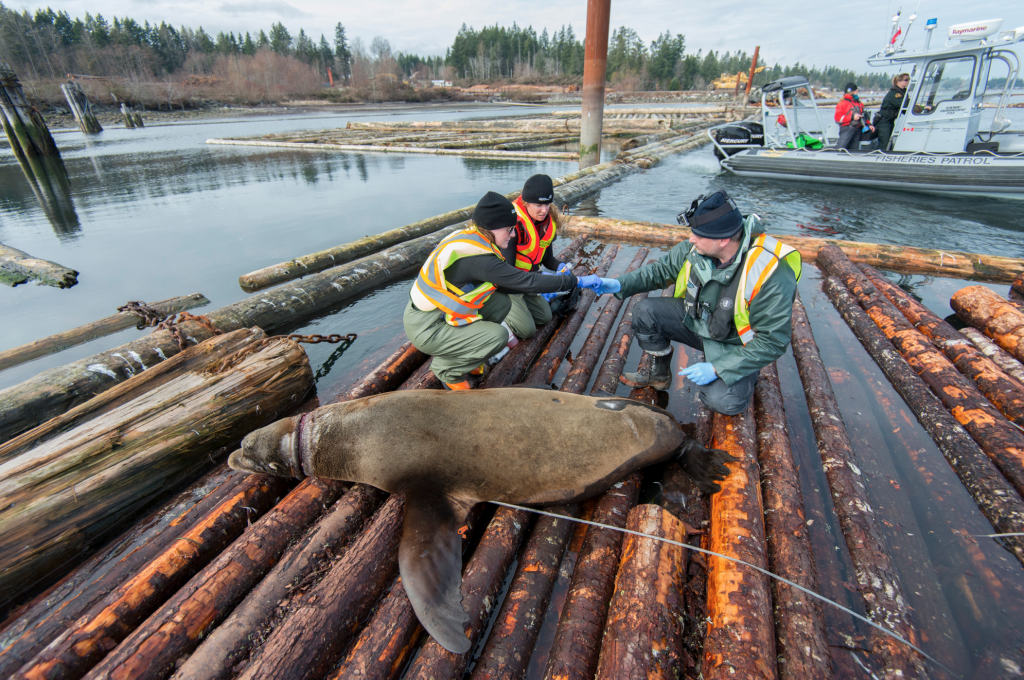 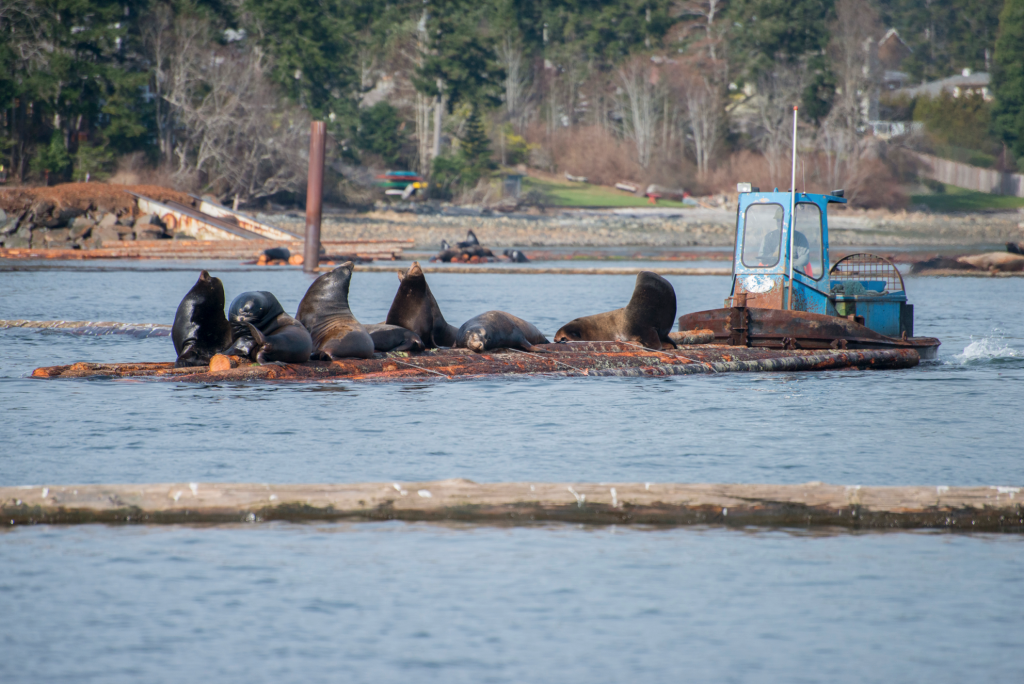 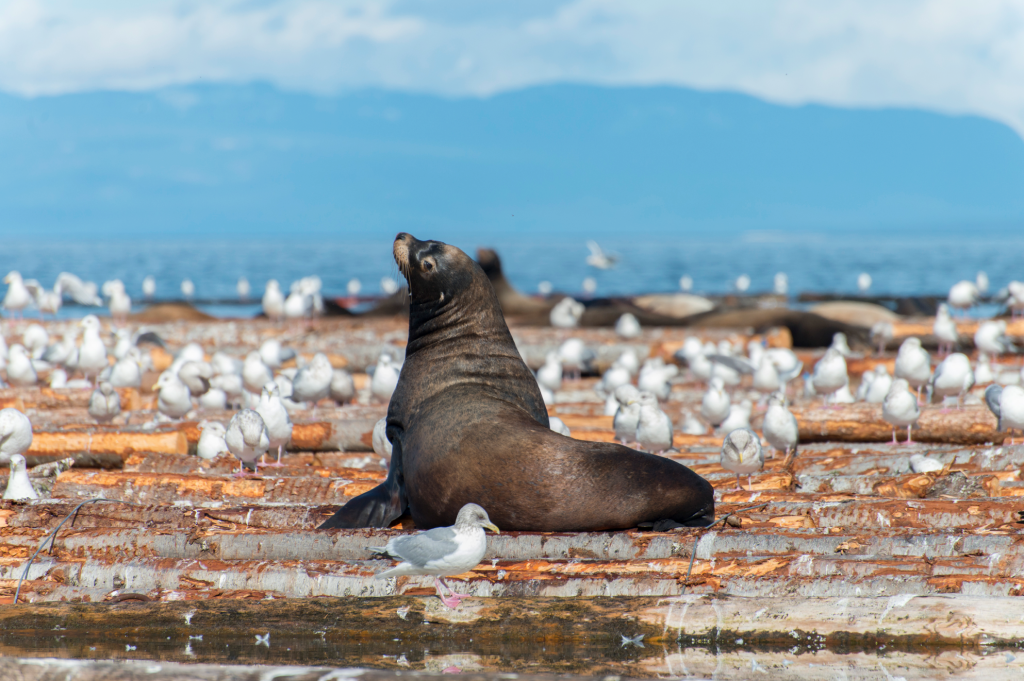 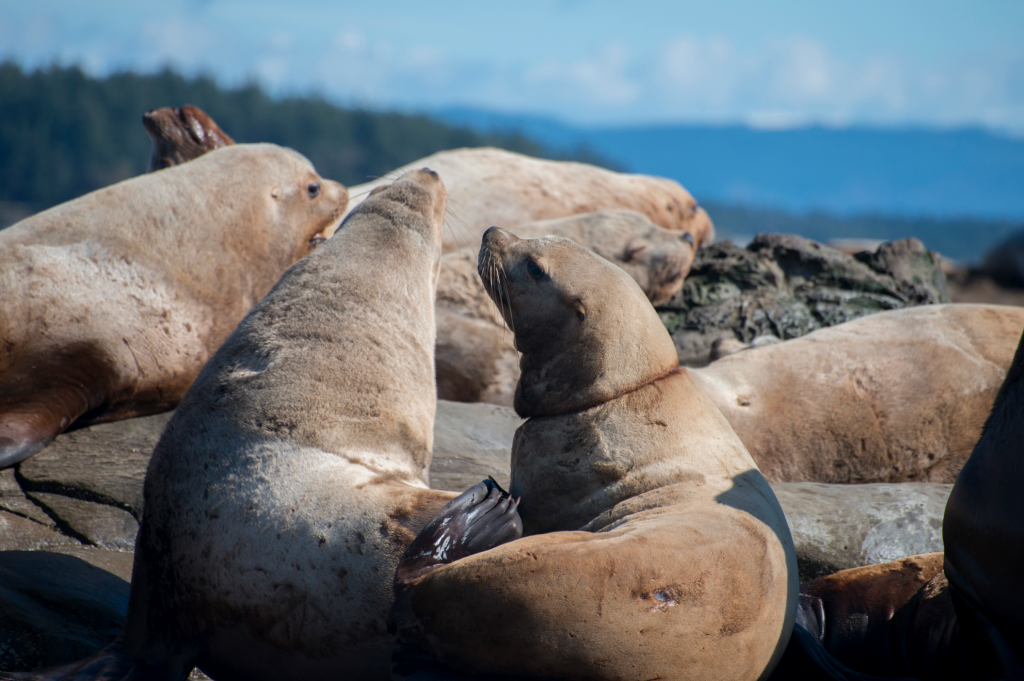 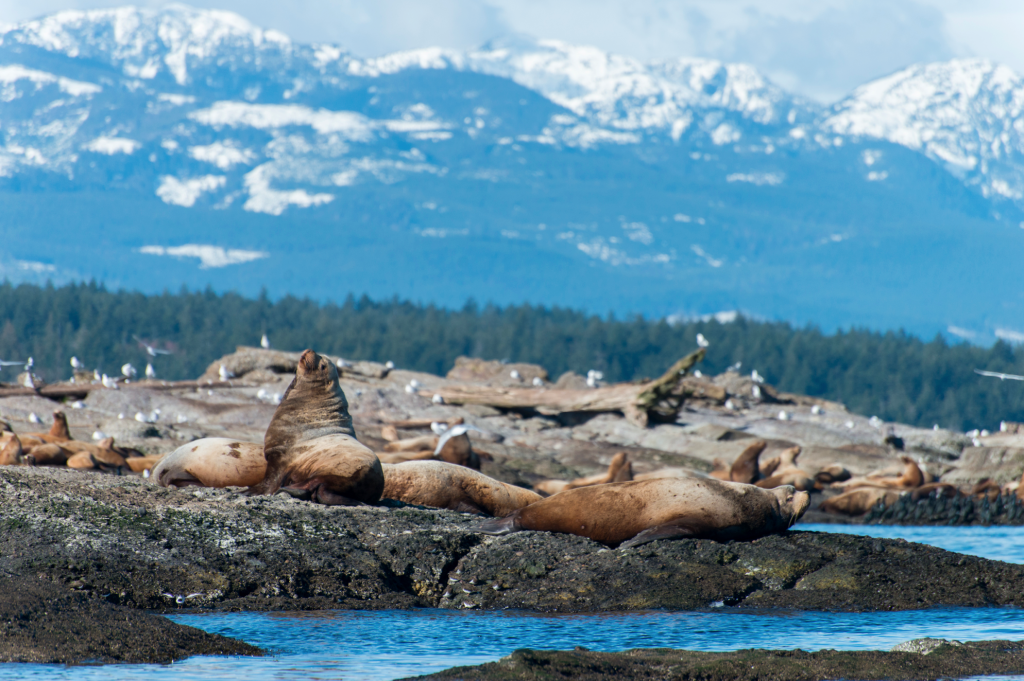 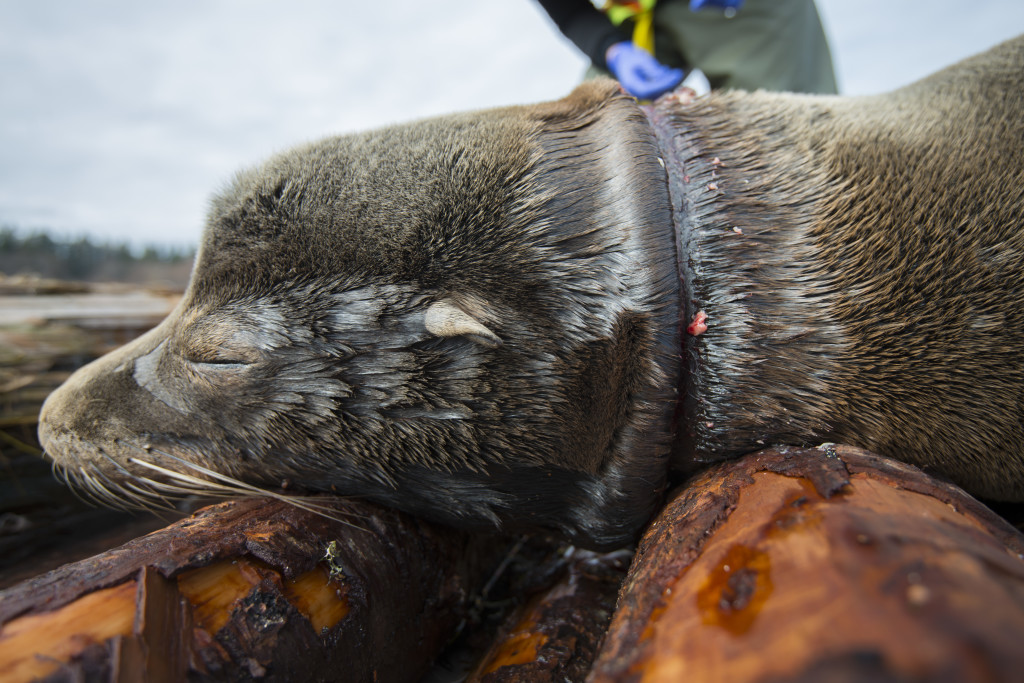