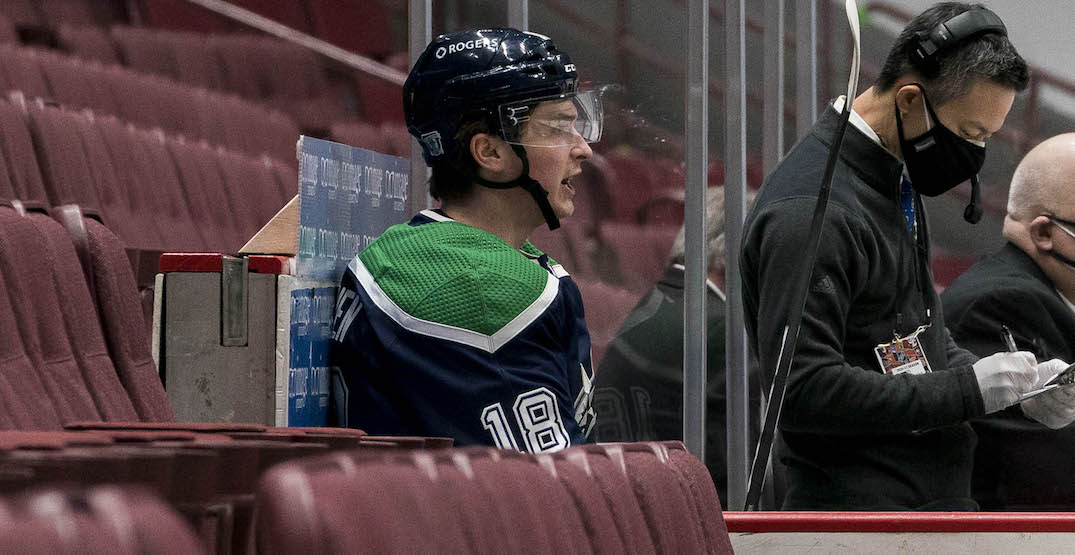 Is Jake Virtanen headed for a contract buyout this offseason?

I have to admit, when Harman Dayal wrote about this idea in The Athletic back in February, I was skeptical. Despite his flaws as a hockey player, the Vancouver Canucks forward was coming off an 18-goal season. The former sixth overall draft pick has size, speed, and strength. And he’s still only 24.

Whatever you think about his play on the ice, that fits the profile of a player that at least one old-school general manager will take a chance on — at least during normal times.

Well, clearly, a lot has changed between now and then.

To start with, Virtanen is currently on leave due to concerning sexual misconduct allegations. In addition, his terrible season on the ice has continued — with just five goals and no assists in 38 games.

What hasn’t changed is the flat cap and the economic hit every team has taken due to the pandemic.

If there’s a still team out there that sees potential in Virtanen, it would be hard to believe that they would accept his full cap hit ($2.55 million), not to mention his 2021-22 salary, which contains $3.4 million in real money.

At this point, it may be best to just walk away from Virtanen entirely by buying out his contract.

Unlike Loui Eriksson’s deal, which is practically buyout-proof, buying out Virtanen’s contract could be a benefit to the team.

As the above image from CapFriendly.com illustrates, the Canucks could save significantly in both cap space and real money by buying out Virtanen.

Because Virtanen is less than 26 years old, he can be bought out at the cost of just one-third of the remaining $3 million of base salary he is owed (the $400K signing bonus is not eligible to be bought out). That buyout is then spread out over a period of twice the remaining contract length.

What about terminating his contract?

Depending on what becomes of the allegations against him, the Canucks could be in a position to terminate Virtanen’s contract.

According to the CBA, players agree to conduct themselves “on and off the rink according to the highest standards of honesty, morality, fair play, and sportsmanship, and to refrain from conduct detrimental to the best interest of the Club, the League or professional hockey generally.”

There have been a few instances where a player has been deemed to be in breach of that clause, allowing the team to terminate the contract.

That’s what happened to former Canuck Brendan Leipsic last year, when “misogynistic and reprehensible” comments he made in a group chat were leaked publicly. The Washington Capitals subsequently put him on unconditional waivers for the purpose of terminating his contract.

Voynov left for the KHL and never returned, while in the case of Richards, the NHLPA filed a grievance on his behalf. The league and the NHLPA later reached a settlement, resulting in Richards becoming an unrestricted free agent. Leipsic also now plays in the KHL.