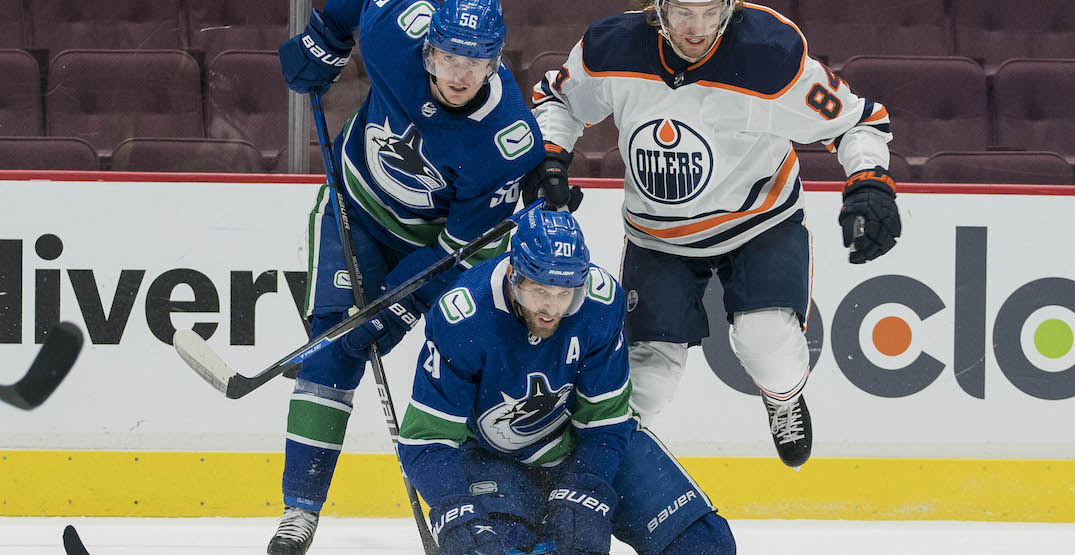 Playing 19 games in 32 nights following a COVID outbreak is proving to be as difficult as advertised for the Vancouver Canucks.

They’ve played eight games since their unscheduled break, and that included four games against the Ottawa Senators and just one back-to-back situation. It’s about to get a whole lot more difficult with 11 games in 17 nights upcoming.

The Canucks begin a four-game series against the Edmonton Oilers tonight, including back-to-back games tonight and tomorrow at Rogers Arena. The team hasn’t had much opportunity to practice and was kept off the ice yesterday following a cross-country return flight from Toronto.

Vancouver has a 1-5 record in their last six games, and will be missing eight forwards from their lineup tonight. Most of them are of the depth variety though their best player is still missing.

Travis Green confirmed today that Brandon Sutter and Marc Michaelis both have upper body injuries and will be unavailable. Add them to the list of injured forwards that includes Elias Pettersson, Tyler Motte, Jay Beagle, Antoine Roussel, and Justin Bailey.

Jake Virtanen, who is on leave following sexual misconduct allegations, is the eighth forward missing from the lineup.

“It’s a lot. You don’t usually run into that. I don’t think we have before,” Green told reporters this morning. “It’s a good opportunity for other players.”

#Canucks finally show lines at am skate. Here’s your projected lineup for Monday vs. Edmonton:

Judging from the lines at practice, shown above by Thomas Drance of The Athletic, it appears Tyler Graovac will play his fourth game of the season. Jonah Gadjovich has been recalled from the Utica Comets, with the 2017 second-round pick able to begin skating with the team when he’s done his seven-day quarantine.

Kole Lind is now a fixture in the team’s top six, which is great news for the 22-year-old who has shown well in his first two NHL games, but also a sign of how dire the situation is for the Canucks right now.

“We’ve been talking to our group about skating, and energy in our game,” Green said. “I think we need that in our game, but also confidence with the puck to make plays. We haven’t scored many goals here as of late, obviously we’ve got some guys out of the lineup that contribute to that, but you’ve got to have confidence to make the right play and the smart play, and also execute the plays that you need to at the NHL level.”

The Canucks have looked like a tired team on many nights following their return to action, though they did have more jump on Saturday — a game in which they still lost 5-1.

The lone bright spot for the Canucks down the stretch is they will be forced into giving their young players a shot to prove themselves at the NHL level. Players like Lind, Gadjovich, and likely defenceman Jack Rathbone will get opportunities that wouldn’t have presented themselves if the team was fully healthy.