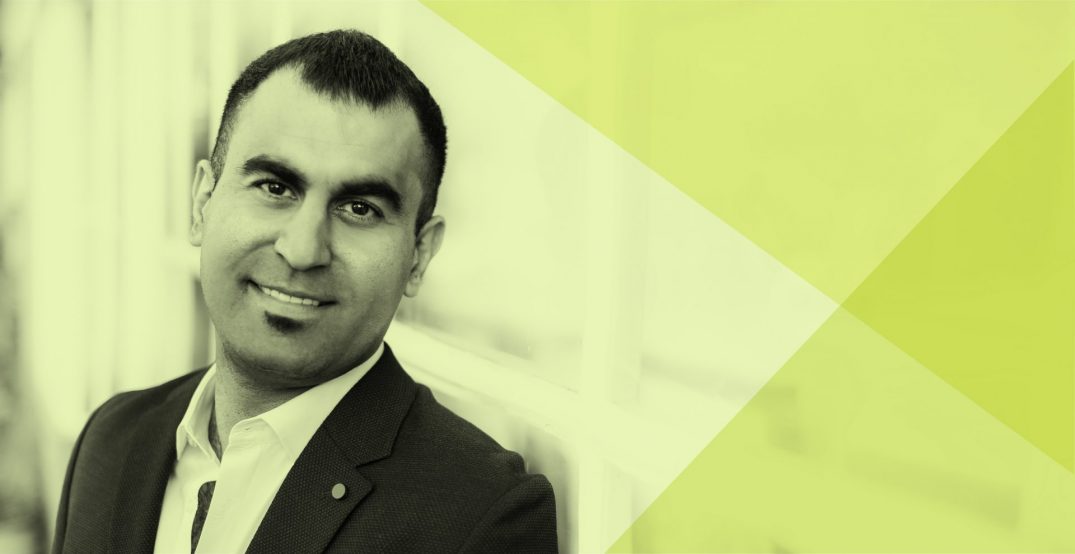 Vancouver’s tech scene may be familiar with the name Victory Square, perhaps for their recently renamed V2 Games studio in Gastown, founded back in 2013.

Now, the team at Victory Square Technologies has a plethora of names under their umbrella including FansUnite, AR/VR leaders Immersive Tech, software and cyber-security company Aspen, FinTech brand CoPilot, and V2 Games.

Daily Hive recently had the chance to chat with one of the leaders at Victory Square Technologies, Vahid Shababi, who has played a major role in the company’s shift to developing and mentoring start-ups for success.

Formerly the chief growth officer at Victory Square, Shababi now sits in the COO chair, maintaining his efforts to give new tech companies a leg-up as they grow to suit the changing environment.

It’s that simple, he says.

Shababi moved to Canada from Iran with his family at the age of 17, and he eventually brought a number of learned life lessons to the world of tech. “You shouldn’t do this if your decision is not a ‘hell yes!'” he adds. “If it’s a ‘hell yes!’ focus on the why and figure out the how. You need to focus on the end goal and go backward from there, to see what needs to be done today.”

“We paid a big price for moving to Canada as a family: my parents had to give up the basics and what they worked for all those years. When you have a mission, you need to make hard choices and sometimes need to wear blinders to avoid being distracted. It’s hard. It’s emotional, but that’s the price to move forward.”

At a young age, Shababi took the dedication and sheer willfulness his parents demonstrated and applied it to basketball.

Throughout his 16 years of playing professional basketball — including a stint at Langara College, Simon Fraser University, and even Iran’s national team — Shababi learned a thing or two about obstacles. “[They] are just excuses for those who don’t want to pay the price,” he says.

“Competitiveness, relentlessness, training, playing under pressure, and not knowing how to give up are key for any person who wants to be successful and happy.”

Youthful exuberance and millennial excitement is what the Victory Square COO says he is most excited about when it comes to the future of technology and venture.

“It’s super exciting for me to work and empower our next generation of leaders.”

A post shared by Victory Square Technologies (@victorysquaretechnologies) on Oct 6, 2020 at 9:27am PDT

Victory Square, which has had to adjust its hands-on approach to the development of its portfolio companies, joins most of the world’s economy in being impacted by the pandemic. However, Shababi considers this an important window of opportunity.

“If you look back over other recessions or downturns in our economy, great companies have been born in this time. This pandemic will also spawn some amazing start-ups and a host of new products and services.”

Included in their assignment of sherpa, for the soon-to-emerge generation of technology leaders, Shababi asserts that VST and those within it are more focused on passing the torch.

“It’s not always about the money. It’s about how we got where we are and how we can equip and empower the next generation to be ready.”

Victory Square is set up to be a big part of that “next big thing,” according to Shababi, who, through all of the hurdles, considers their portfolio of companies a portion of the “fourth industrial revolution.”

“We’re not short-term thinkers or investors,” says Shababi. “We continue looking for good products and companies to invest in, acquire, and work with them to grow.”

Part of that new generation is HealthTech company Victory Square Health — one of VST’s 23 industry-shaking portfolio companies — who is on the cutting edge of research and development for coronavirus testing.

Victory Square Health — which recently entered into an agreement for testing and distribution with the Canadian Police Association — has the technology to turn around coronavirus tests in a “five to 15 minute” window.

Though the group could not have foreseen coming into play in this way, the Health arm of Victory Square’s portfolio was established back in 2016. Now the company is playing a major part in the health and safety of Canadians — showing that VST has its sights set on the beyond.

This eye on tomorrow is part of Shababi’s core, which makes his job something he has an endless supply of passion for. “I hate maintenance, I love the growth stage,” he says.

Shababi is a thought and technology leader today who is in the best seat to teach the leaders of tomorrow, something he often pays forward outside of their growth scaling.

As part of the VST leadership team, Shababi has been on the front lines when it comes to their philanthropic efforts, dedicating more than $10 million in donations to the BC Children’s Hospital, Variety BC, Covenant House, and more.