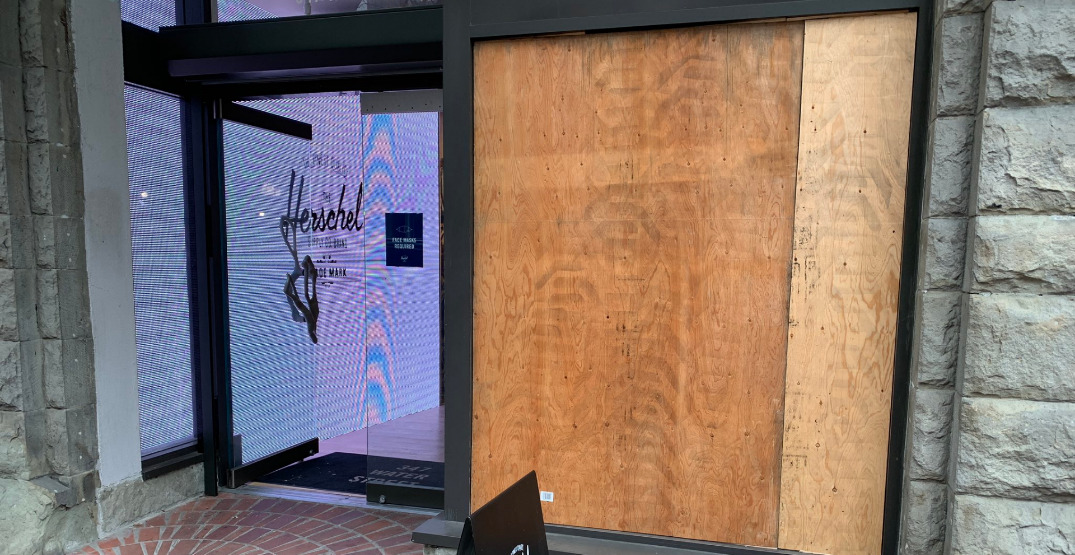 Herschel Supply Co. in Vancouver’s Gastown neighbourhood has had a rough go of things in recent months when it comes to property crime.

The latest incident, at the Herschel location on Water Street, was made public on Twitter on Tuesday, and many took to the social media platform to share their continued disappointment with how the city is handling property crime.

The initial tweet came from Peter Meiszner, who shared that this is the third time that this Herschel location has had to deal with property destruction. He also suggested the most recent attack involved a blowtorch.

Meiszner, who is hoping to become a city councillor in Vancouver, suggests people no longer feel safe downtown.

“It’s hard to walk a block in downtown Vancouver without encountering plywood over windows, or piles of trash including syringes,” he told Daily Hive.

One user responded to the tweet saying, “Just another day in Gastown.”

Herschel dealing with their third smashed window – the last two they didn’t bother replacing and just covered up with advertising. This time someone came by at 4am with a blowtorch. #gastown pic.twitter.com/LCvowJpIVO

This incident comes after several others around parts of downtown Vancouver over the last while that have involved storefronts being smashed and robbed.

John Clerides, who owns Marquis Wine Cellars on Davie Street, had his storefronts smashed just over a month ago.

He suggested the folks who vandalized Herschel in Gastown may have been the same people behind the incidents at his store. He’s directing his frustration at the mayor of Vancouver, Kennedy Stewart.

The VPD tells Daily Hive that the file is under investigation.

Daily Hive has reached out to Herschel Supply Co. and Mayor Stewart for comment.