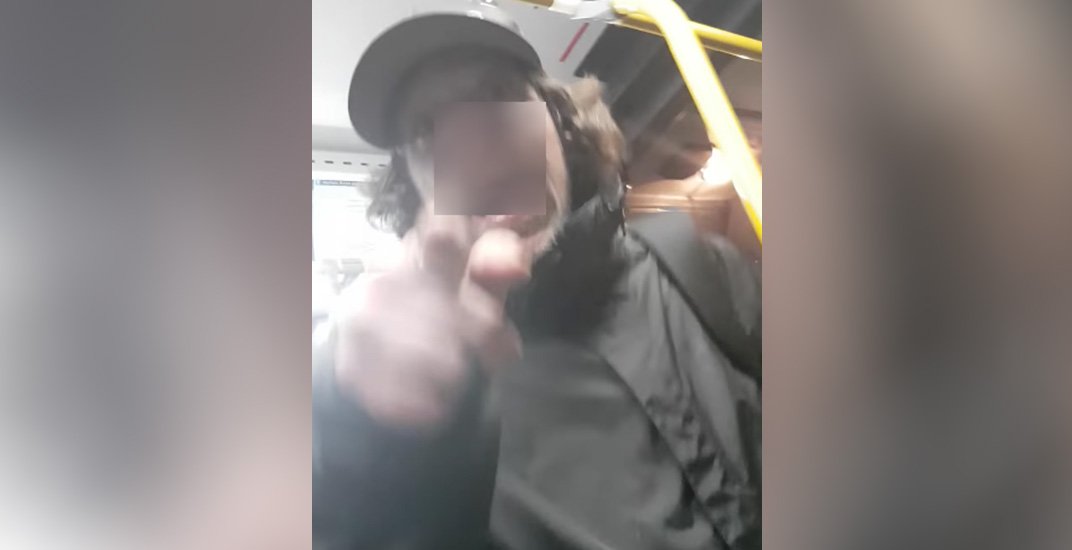 The incident occurred on the No. 14 bus in downtown Vancouver at approximately 2 am on Thursday.

Smartphone video uploaded to YouTube shows a man in the back of the bus behaving strangely, pulling up his pants before walking towards the front door to exit the bus. Apart from the hostile man, a female passenger, and the bus driver, the bus appears to be completely empty.

Moments before this, the bus driver can be seen walking towards the front of the bus, away from the man.

As the man makes his exit, he passes a woman sitting near the front of the bus and asks: “Do you have a few bucks?”

The woman responds to his request with: “No, I’ve got nothing for you.”

The aggressive man then swears at the woman and exits the bus, and he glares at her through the window of the bus and slaps the glass.

When he realizes he is being filmed, he rushes back into the bus and angrily confronts the woman.

She replies to his verbal assaults: “You’re going to jail.”

In a burst of violent outrage, the man engages in a scuffle with the woman in an apparent attempt to steal her smartphone. The video footage ends outside the bus with the woman repeatedly screaming, “Help me!”

She was eventually able to recover her smartphone from the man.

Sergeant Jason Robillard with the Vancouver Police Department told Daily Hive the suspect left the scene and was not identified.

“The suspect tried to forcefully grab the complainants phone and assaulted her in the process,” said Robillard. “The complainant retained her phone and was not injured.”

The investigation continues and further CCTV footage is being reviewed.