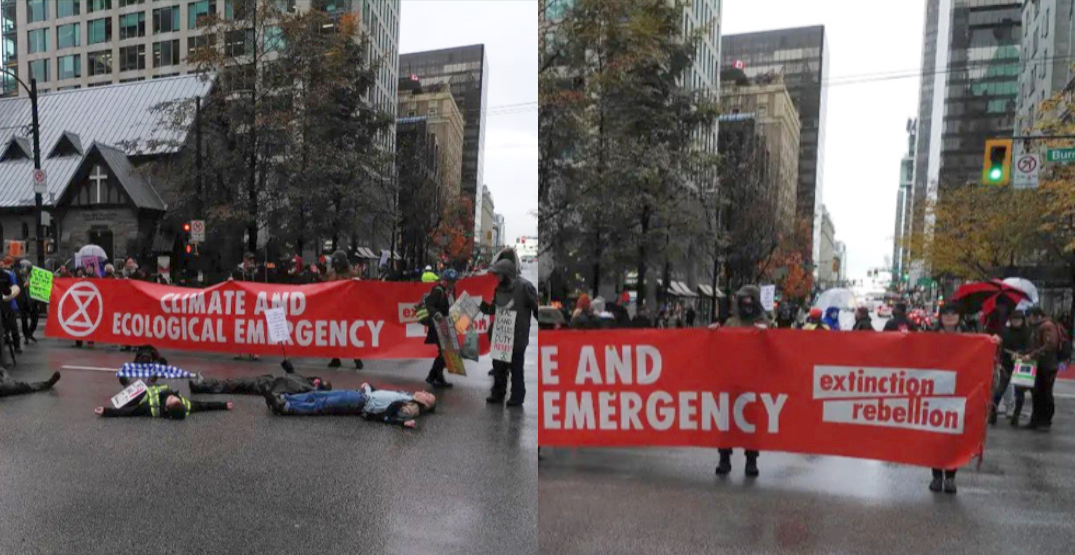 Arrests have been made following a protest in downtown Vancouver to demand climate action.

On Saturday, October 16, Vancouver Police confirmed that four protesters were arrested following a “die-in” at the intersection of Burrard and Georgia in Vancouver.

Extinction Rebellion Vancouver announced earlier in October, 2021 that it would participate in two weeks of mass civil disobedience in the city.

“Two weeks of constant disruption aims to put the climate and ecological emergency in the national media spotlight and push the provincial and federal governments to end all fossil fuel subsidies,” said a release from Extinction Rebellion Vancouver. “Arrests are expected throughout the two weeks,” they said.

Constable Tania Visintin with the VPD said in a statement that a “group of 50 people marched to the intersection of Georgia and Burrard streets Saturday afternoon.”

“There, 13 people staged a “die-in” by laying on the ground. This impacted vehicle traffic throughout downtown.”

After they were “given time to express their views,” police say that protesters were asked to move off the road. They arrested two men and two women were for mischief and were driven to jail and released pending a future court date, according to police.

Tweets from the VPD show that the intersection was blocked for approximately an hour.

#VanTraffic The intersection of Burrard and Georgia is shut down due to a protest. Please take an alternative route.

#VanTraffic: Burrard and Georgia is now open to traffic in all directions.

Earlier in the day, protesters had gathered at Nelson Park. They were even joined by David Suzuki, according to a post on the group’s social media page.

This protest is the first of many planned in the city to block major intersections, roads, bridges, and the airport. On Saturday, October 17, they are planning to block Commercial and Broadway.

Here’s Extinction Rebellion’s full schedule so you can see where they will be in Vancouver in the coming days: