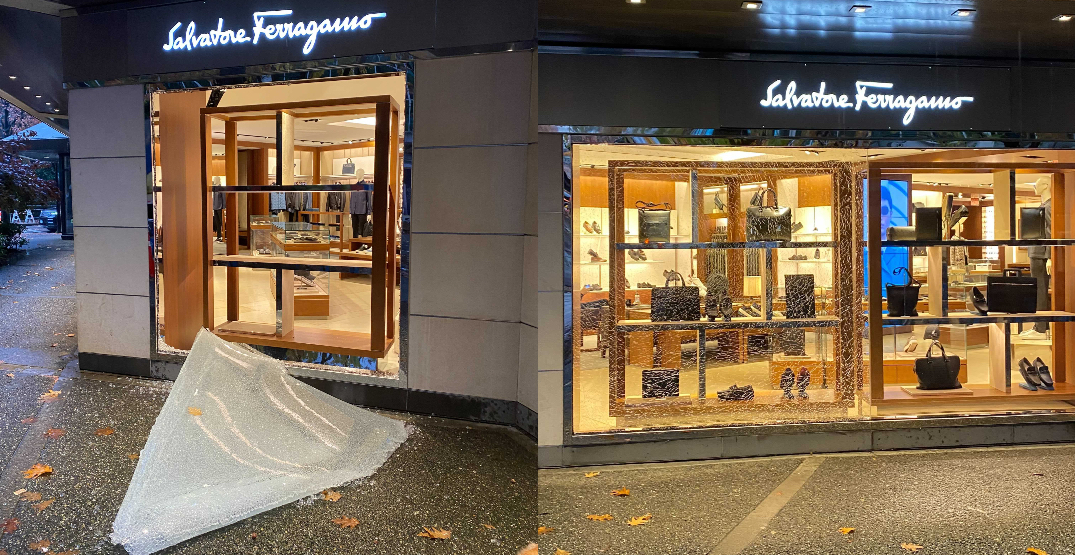 This fall, businesses in Downtown Vancouver have had their windows smashed repeatedly and even been broken into.

A recent incident was evident in the morning of Saturday, October 16. It appeared that the windows of the Salvatore Ferragamo at 918 Robson Street were smashed and broken into.

Daily Hive reached the store by phone and they said they were still open on Saturday and to their knowledge, everyone was okay but some things were taken.

Sergeant Steve Addison with the Vancouver Police department said in a statement that they were investigating a break-in at a store near Robson and Hornby Street.

“Someone smashed the store windows and stole several thousand dollars in merchandise. The suspect was gone when VPD arrived, and no arrests have been made,” said Sergeant Addison.

Other businesses, notably on Davie Street and the Herschel store in Gastown, have also experienced smashed windows recently.

A photo posted to Twitter on Friday, October 15 shows a handwritten sign in the window of Finch’s Tearoom in Vancouver. It reads, “Please don’t trash my windows. It’s been hard enough staying open through stupid covid…most small businesses like us have no glass insurance – and you think it’s fair I pay $800 for this? You don’t even know me. That’s so harsh.”

Daily Hive reached Finch’s owner Sheryl Matthew who confirmed that her businesses have been damaged recently.

“I’ve had a lot of window damage, particularly since two entire walls at Finch’s are antique windows,” she said.

“Many small businesses do not have window glass insurance, myself included, because the policies are more expensive than my worst years of glass damage, which at its worst was more than $4,000 worth of vandalism and glass breaks over two years.”

Just weeks earlier on September 28, a community officer with the Vancouver Police Department posted a series of photos of three smashed windows. They were all broken in five minutes of each other on Davie Street.

Three windows damaged within five minutes along Davie this afternoon. One person arrested.