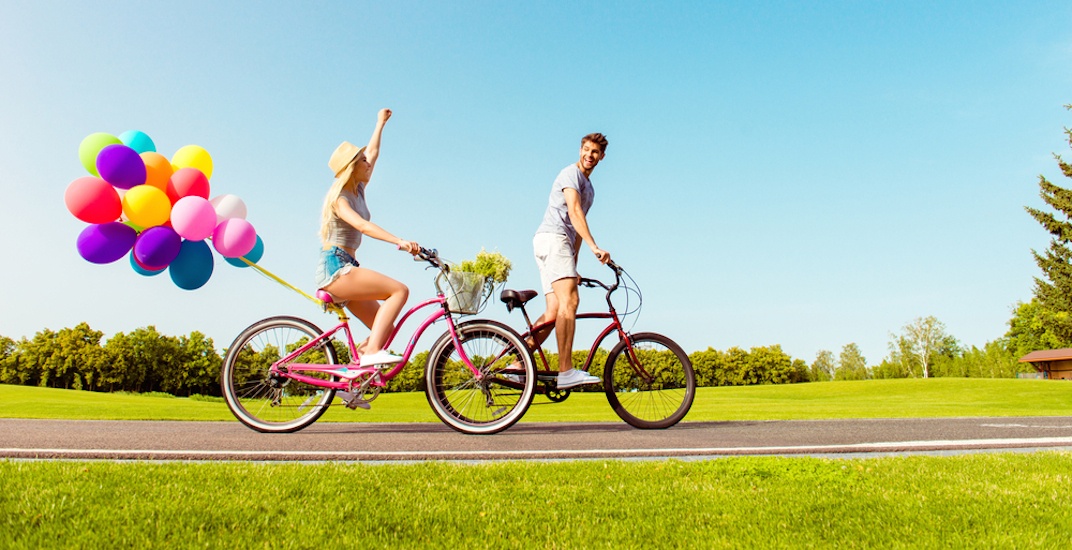 Riding bicycles in a park with balloons. (Shutterstock)

Clowns, birthday gatherings for children, and wedding shoots are not forbidden at parks and community centres in Vancouver, but don’t think about bringing balloons if this ban gets passed.

The Vancouver Park Board is considering a ban that would prohibit any use or display of balloons in parks, community centres, and any other Park Board property.

Green Party Park Board commissioner Stuart Mackinnon has put forward a motion proposing the ban, and it will be debated at the upcoming Park Board meeting on Monday, September 18.

He says the rationale behind the ban is purely environmental as balloons made of latex or plastic are non-renewable and harmful to wildlife.

“Animals both on land and in the oceans frequently misidentify deflated balloons as sources of food,” reads the motion.

“Sea turtles are especially vulnerable as jellyfish are a common prey item and often the animals consume deflated balloons floating on the water’s surface, thinking they are a suitable food source which leads to stomach or intestinal blockages and eventual starvation.”

As well, he claims birds often get entangled in the strings or ribbons attached to balloons. It can also become wrapped on the flippers and fins of sea turtles, seals, and dolphins, which leads to infections and possibly even death by drowning.

Mackinnon said balloons can be harmful to humans as well, citing one study that found balloons cause more childhood deaths than any other toy.

Just this week, in an effort to be “zero waste”, Vancouver City Council began a consultation process with businesses and stakeholders on banning single-use items such as disposable coffee cups, plastic and paper shopping bags, and styrofoam takeout containers.