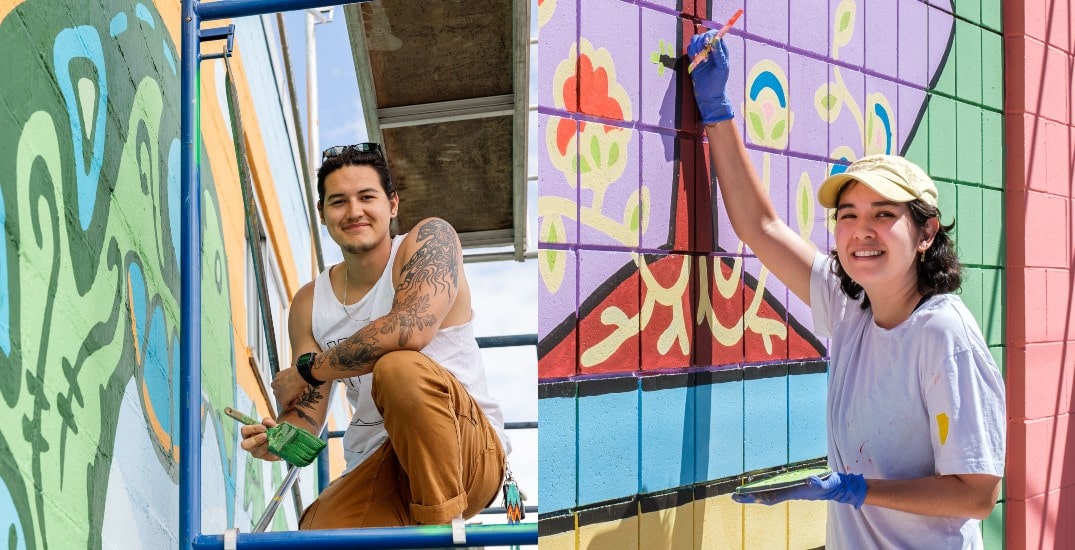 Climate change is top of mind for many people these days, including the talented artists creating new works for Vancouver Mural Festival 2022 (VMF).

VMF, which is taking place from August 4 to 14 in neighbourhoods around the city, is renowned for its eye-catching giant murals and popular live events. However, the festival is also acclaimed for sharing stories from the community, reflecting the diversity and culture of the city, and raising awareness of socio-cultural issues.

One such topic is climate awareness and this year attendees of the mural festival will be able to see thought-provoking new additions to the VMF Climate Collection guest curated by keiko Hart.

“I am focused on curating works that respond to inquiries of how we mobilize mural artistry for communal climate activism,” said Hart in an interview with Daily Hive. “To (re)assess and (re)imagine environmentally respectful futurisms in the face of ecological emergency, I look to my Japanese Shinto/神道 upbringing that instilled philosophies of reciprocity and caretaking for the natural world.

“The artists I’ve curated for the Climate Collection center the voices of Indigenous and racialized bodies that are at the forefront of these climate activism movements, having risen up to combat the environmental racism that displaced them from their resources and gentrified their communities.” 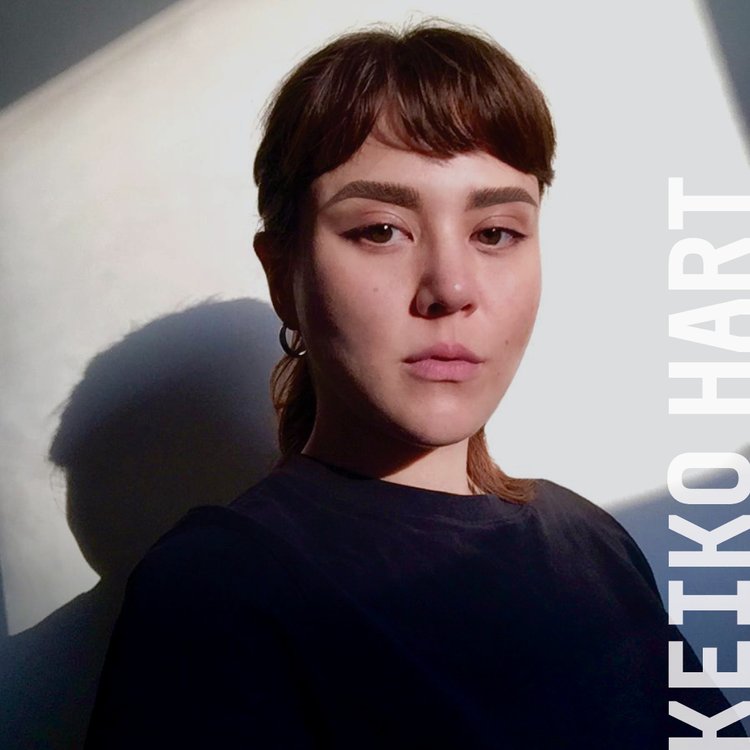 Hart invites everyone to discover the Climate Collection at VMF 2022 and to also be mindful of how they engage with the artworks.

“Beyond beautifying the concrete jungles of gentrified streets, murals can function as more than just a visual dressing: they can be a record of cultural lineage erased by western hegemony, a communal call to action in the face of capitalism, a precursor into possible inclusive futurism — a message to entice you to reflect, to speak, to act.

During VMF 2022 and beyond, discover the new Climate Collection murals. 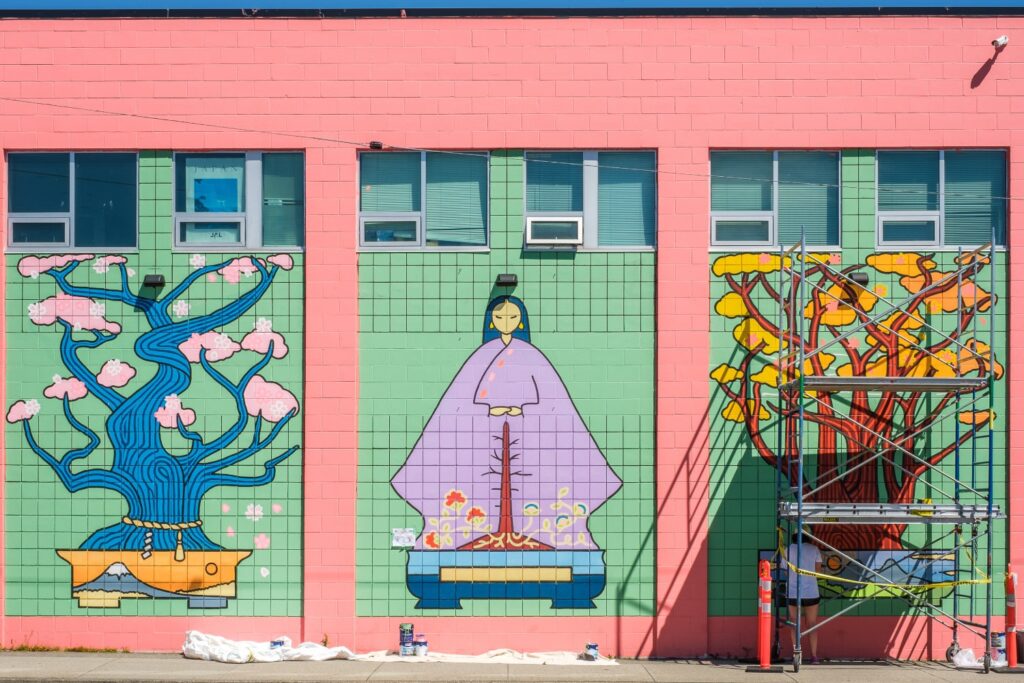 Ohki’s Protect Our Trees on the Fujiya Foods building at Clark Drive and Venables Street is comprised of three bonsai trees: a cherry blossom tree, a fir tree sapling, and a Japanese maple tree. According to the artist’s statement, the mural’s title has multiple meanings.

“Considering the long history of Fujiya in Vancouver, the title of the design has two meanings: we must protect the trees in British Columbia, pillars of the coastal forest, and we must support the pillar businesses of the Vancouver community.”

The artwork was created in partnership with the Canadian Parks & Wilderness Society and the 5th International Marine Protected Areas Congress (IMPAC5).

Shen’s mural aims to spotlight smaller and lesser known species native to BC, such as the banded cord moss to the blue-grey tail dropper, through the Chinese concept of “the red string of fate/destiny.” According to the artist, the mythological belief is comparable to the biological symbiosis between all living things and how we are connected for survival.

Greene and Reclama’s mural was inspired by the efforts to bring Indigenous leadership together for ocean conservation and reflects the collaborative approach to strengthen their combined efforts in working together to protect their home. The artwork was created in partnership with the Canadian Parks & Wilderness Society and the 5th International Marine Protected Areas Congress (IMPAC5). 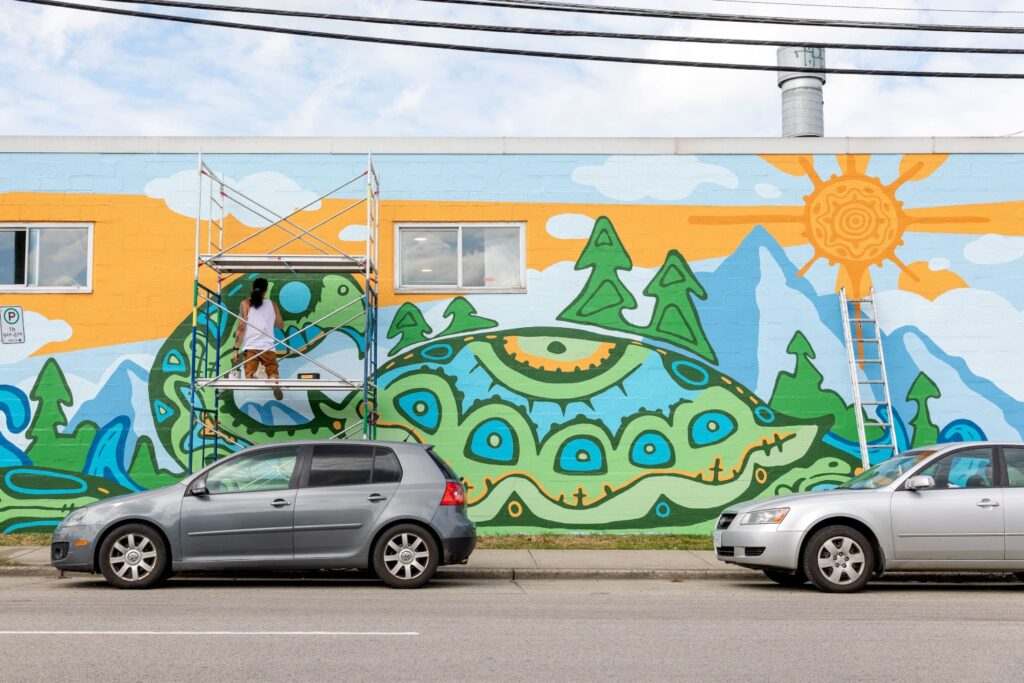 Ellison-Dysart’s massive artwork reminds viewers that it is important to care for Turtle Island and all its inhabitants.

“Turtle Island is the name that various Indigenous nations have always called “North America” since time immemorial,” said Ellison-Dysart in a mural statement. “The name comes from oral histories and creation stories that tell of a turtle who holds the world on its back… Let’s not forget our responsibility to the life around us.”

Hipol and Kim’s Water: Connecting Roots provides an Asian-Canadian perspective to addressing Climate change within the traditional unceded territories of the First Nations, Inuit, and Métis.

The mural uses water as the focus of climate activism, and how water is key to life and growth and should be accessible to all.

Download the VMF MOBILE APP to find and learn about over 300 murals — including 30+ new murals in 2022 — across the city. Visit https://vanmuralfest.ca/ and follow @vanmuralfest for details, event calendar, and updates for Vancouver Mural Festival 2022.