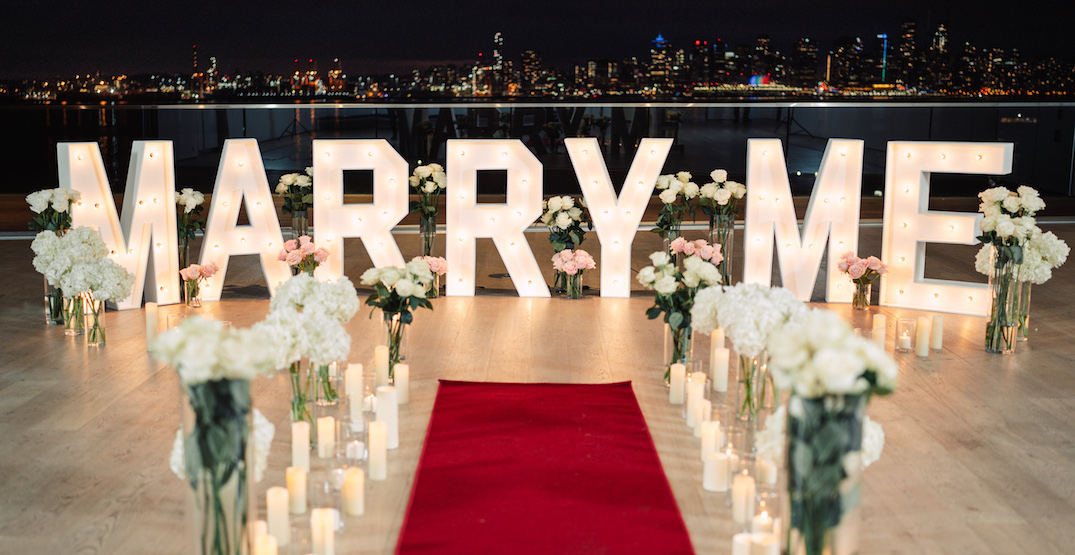 Lilly Harnett has a success rate of 100%.

As the CEO and Executive Proposal Planner for Luxe Proposals, she’s seen it all: marriage proposals on beaches, rooftops, mountaintops. Proposals in gardens, vineyards, art galleries, hotels, restaurants, private homes. Nervous folks popping the question in a helicopter, on a plane, on board a yacht.

It’s probably no huge surprise that 99% of the time, the guy is the one doing the asking. And so far, Harnett says, 100% of the time the answer has been yes. 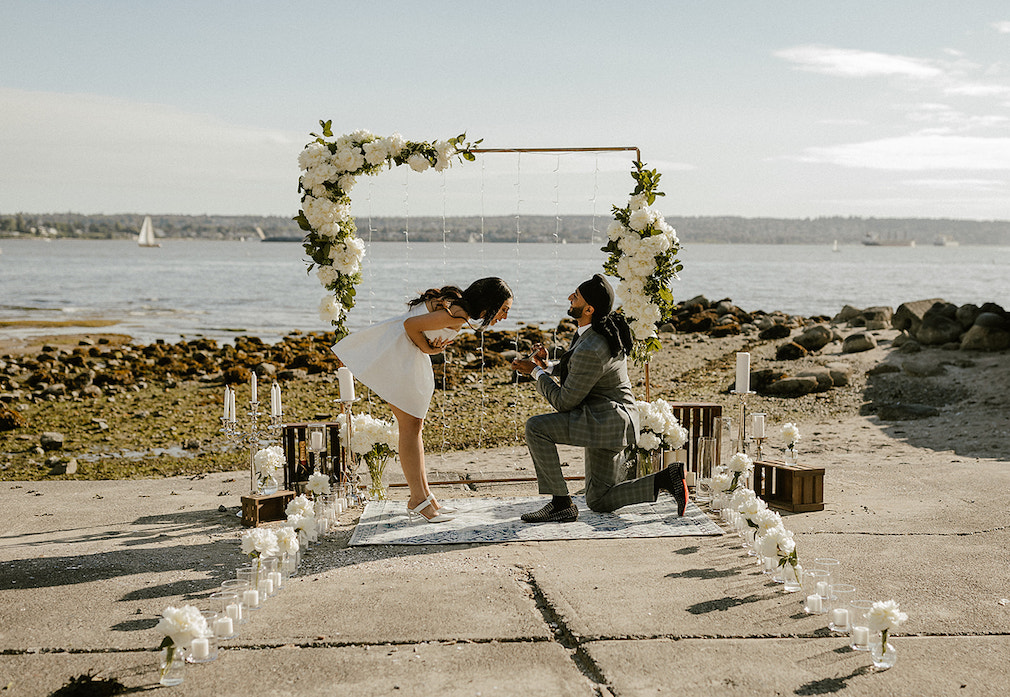 Organizing marriage proposals is a niche but growing market. “It’s becoming bigger and bigger,” Harnett notes. “And the proposals are becoming more and more elaborate. The more people hear about it, the bigger they want to go with their proposal.”

Before coming onboard with Luxe Proposals, Harnett spent two and a half years at VanDusen Botanical Garden. “I did about 150 weddings in that time,” she says. “It was a lot.” Though she enjoyed working on weddings, she likes planning marriage proposals even more.

“Weddings are amazing, but I found them to be a little commercial in the sense that it’s very group-orientated and family-focused,” she says. “The proposal itself is so intimate, and it’s just typically for the couple.” 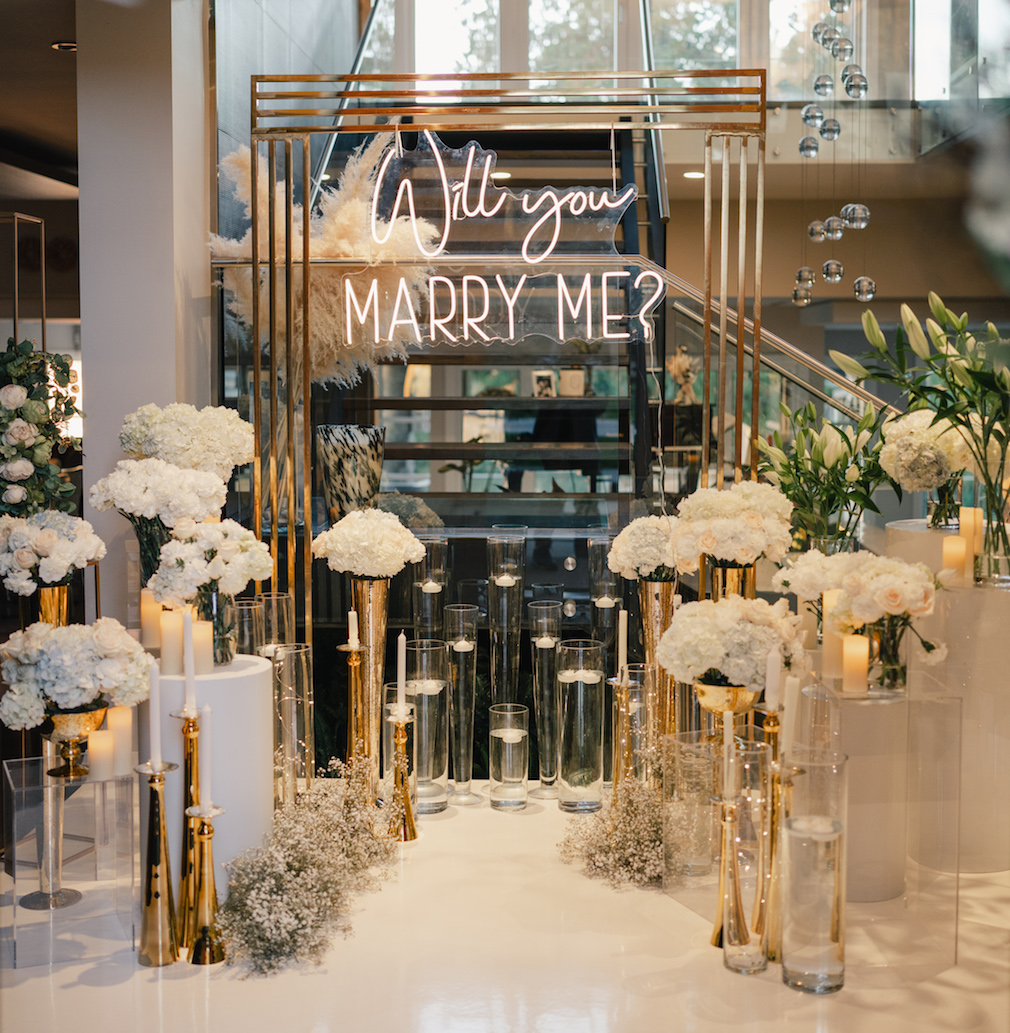 The process usually starts with a nervous man approaching Luxe about one or two months before proposal day. “They’re very stressed about this, really and truly, the poor guys,” Harnett says. She starts by finding out how prepared they are, and the first thing she asks is if they have the ring yet. “Sometimes they’re like, ‘The what?’”

A few of the suitors have a clear idea of what the proposal should look like — and some come armed with not-so-subtle hints and Instagram posts from significant others to use as inspiration. “I’ve had some interesting ones where the girls would 100% know about it, but it’s a ‘surprise,’” Harnett says. “We’ll take a look at the Instagram. We’ll get a sense of what you’re looking for. But of course, we’ll create your own proposal, because we want it to be your own. We don’t want to copy and paste.”

Most of Luxe’s customers, though, aren’t sure what want, other than a memorable experience: “95% of them come with no requirements, just to surprise her and make it super special and get that yes.” 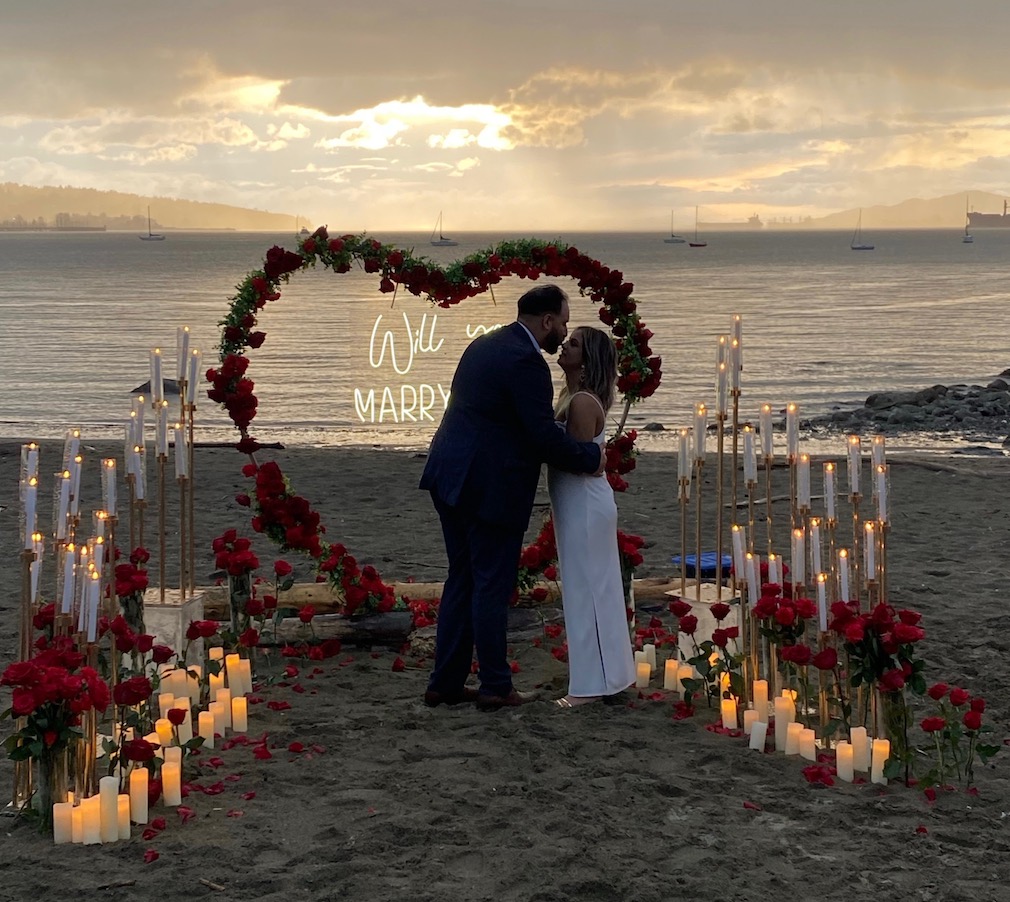 Marriage proposals happen all year round, with the peak months being May through August. At any time of year, soggy weather is a challenge for outdoor proposals. “We live in Vancouver, and the weather’s so indecisive,” Harnett points out. “It’s important to be a little bit flexible.”

She describes an outdoor proposal earlier this year at Kits Beach that involved an arch covered in 700 red roses and 400 carnations. “Everything was perfect. There was an audience, of course, this beautiful setup,” she recalls. And then: “Boom, thunder and lightning. The arch came down. In the space of 15 minutes, everything just took a turn.” She and her team had to scramble to put the arch back together before the couple arrived.

Another memorable proposal was for a couple who adored a specific video game: “They loved The Legend of Zelda, and what he wanted to do was a maze.” It was the wrong time of a year for a maze, so Harnett had to get creative.

“What I did was I rented out a forest in the countryside,” she recalls. “It was basically a whole game that they had to do in real life. And then at the end of it, he was standing there in a big cloud of red smoke and he proposed. It was very, very cool.” The couple were so impressed with the whole proposal experience that they asked Harnett to plan their wedding, too, and she agreed, since she still does a handful of them each year.

Typically, marriage proposals are only for the couple — “just to have that intimate, beautiful memory together” — but sometimes adorable doggos join in the fun. “We’ve had a couple of pets,” Harnett says. “They make for lovely engagement photos.”

And sometimes proposals include what Harnett describes as “entourages hiding in the bushes.” She usually advises that the schedule be organized so that the couple can have the first 15 minutes to themselves before friends and family show up to celebrate. 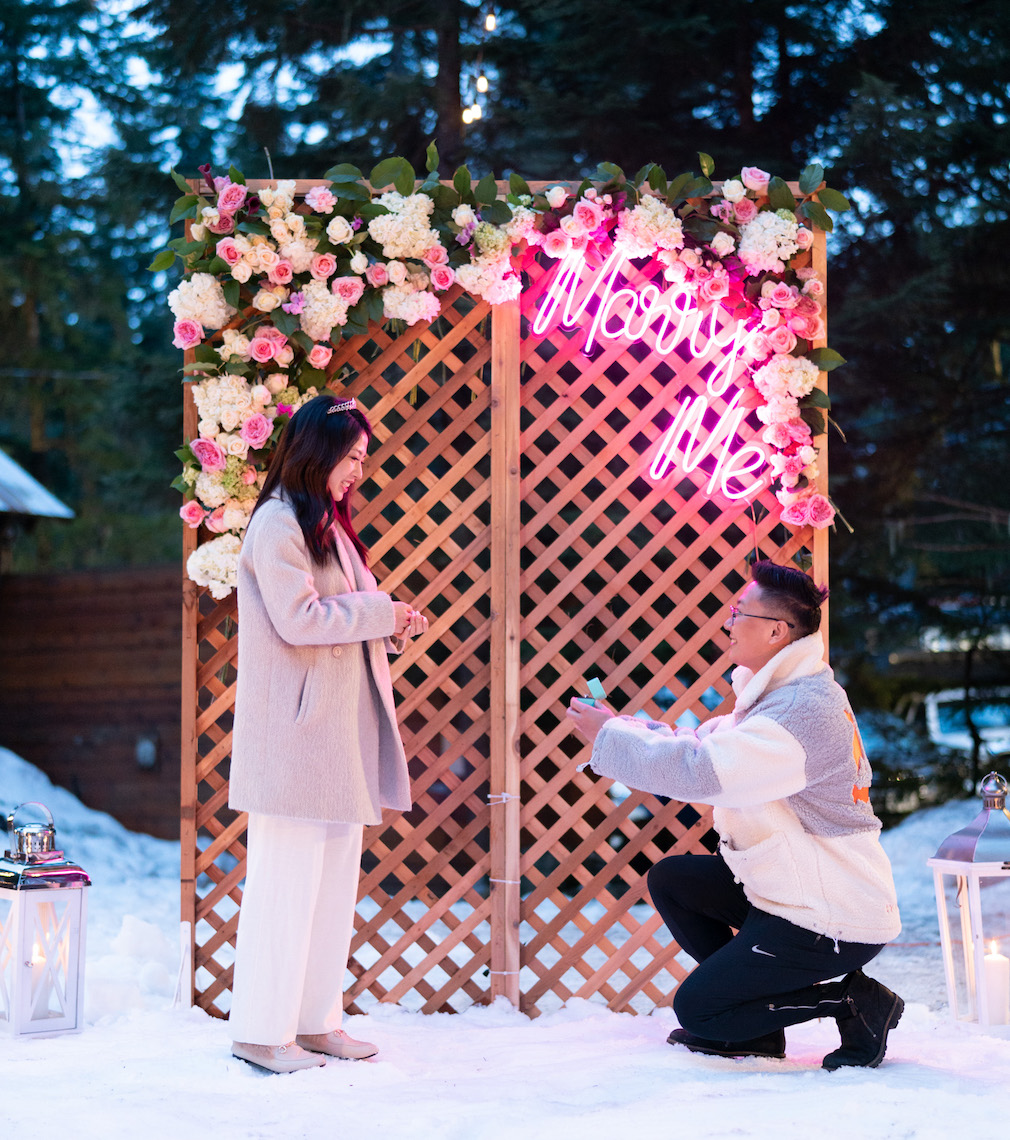 Harnett mentions that some of the marriage proposals she plans are for couples whose wedding date is already set. Typically, this occurs with people from cultures where large weddings scheduled far ahead are the norm. “They have their big wedding date set out, but he still wants to give her that special day between the two of them.”

Another unexpected type of customer? Couples who are already married. “Because they never got to do it properly,” Harnett explains. “It’s so sweet. I even got goosebumps just talking about it.”

Though each proposal is unique, Harnett does notice some trends: all-white floral art, love-heart arches, “Marry Me” letters. She says with a laugh, “It’s 50-50 with the ‘Marry Me’ letters. People think it’s cliché, and then other people really want it.” 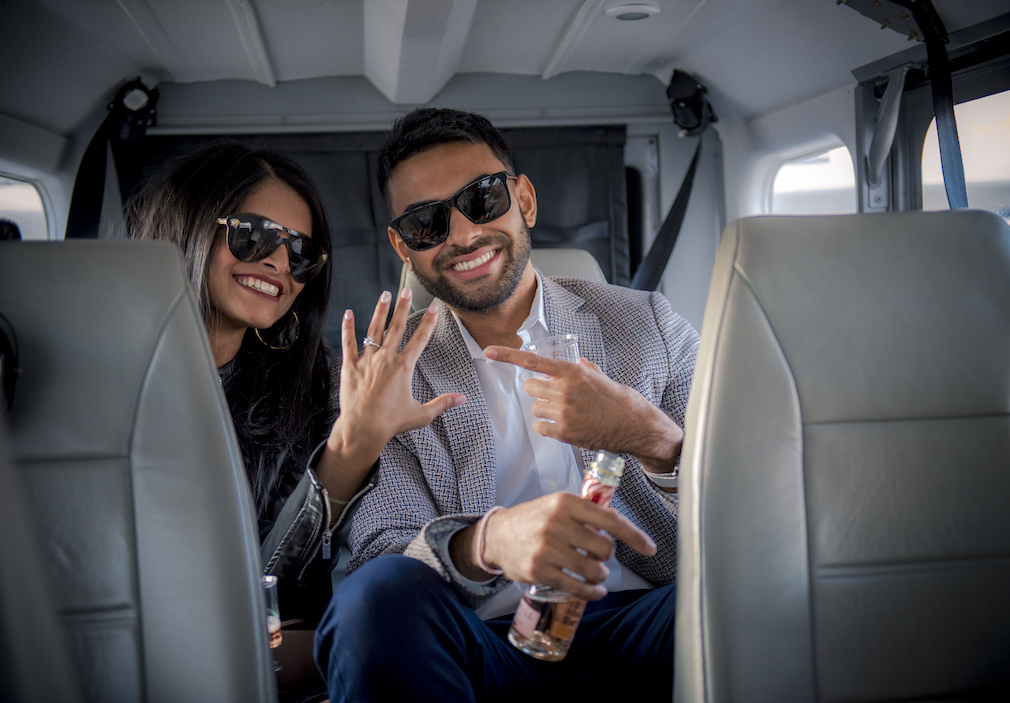 One perpetual challenge is getting the woman to the venue on time and dressed appropriately. The goal is for the woman to be surprised by the proposal — but not to be wearing ratty sweatpants and have uncombed hair in her engagement photos. It’s Harnett’s job to figure out a believable ruse.

“So what I typically do is I’ll get to know the guy a little bit, what he does for work, what his friends do, and then I’ll come up with a story to match his lifestyle,” she says. That might mean a fake event such as a gala or work get-together. Harnett stations herself at the door of the venue, looking official with a clipboard, and offers to check the woman’s jacket and purse. “What I really want to do is get her jacket off and get her bag off before she goes into the actual venue,” she says. “Most of the time they’re all so confused, they don’t question it.” 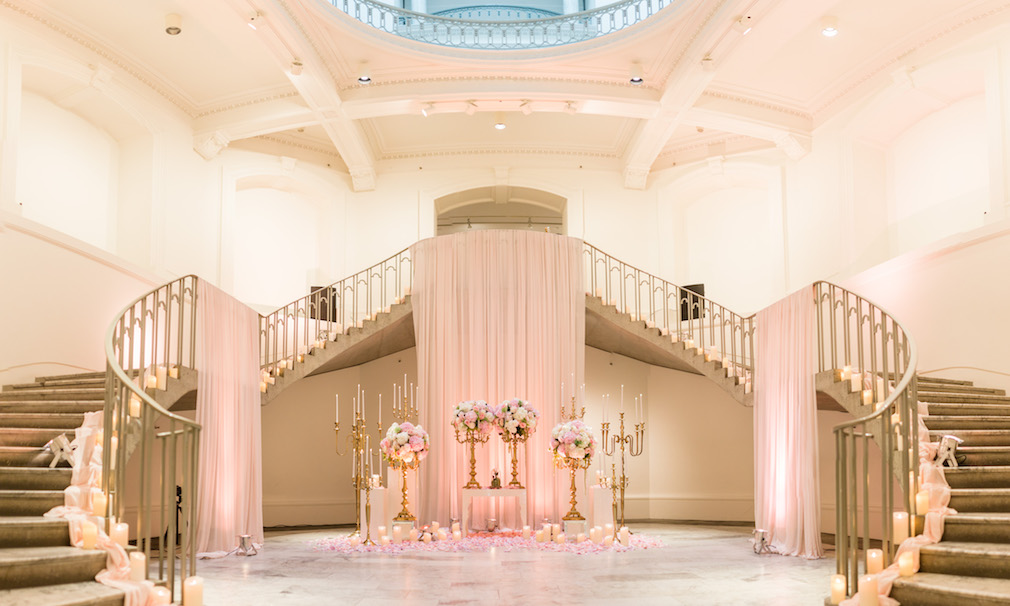 Then comes the moment when the woman steps into the venue and the whole proposal setup is revealed. Harnett has already coached the groom-to-be: “Now remember as soon as you walk in, take her hand so you lead her up to the actual proposal setting.” Sometimes the guy gets so nervous that he forgets and kneels down immediately, far from the picturesque setup with the good lighting. But Harnett is prepared for that eventuality, too.

“Just be comfortable, because we can always re-enact,” she makes sure to tell the anxious fellow beforehand. “Don’t worry about getting it perfect.” And she often has to “bring it to the guy’s attention that the day is actually for him as well.”

Luxe Proposals organizes these special days in Vancouver, Toronto, Calgary, Montreal, Los Angeles, Seattle and New York. As for cost, most Luxe marriage proposals are around $5,000. A simple outdoor one could be $3,500. The most expensive proposal Harnett has planned cost $20,000, but she’s heard of ones as pricey as $50,000.

At the end of the day, Harnett truly loves what she does for a living. “It’s very creative, and I’m sure you can imagine it’s definitely a lot of stress at times. But it’s worth it. It definitely, definitely is.”