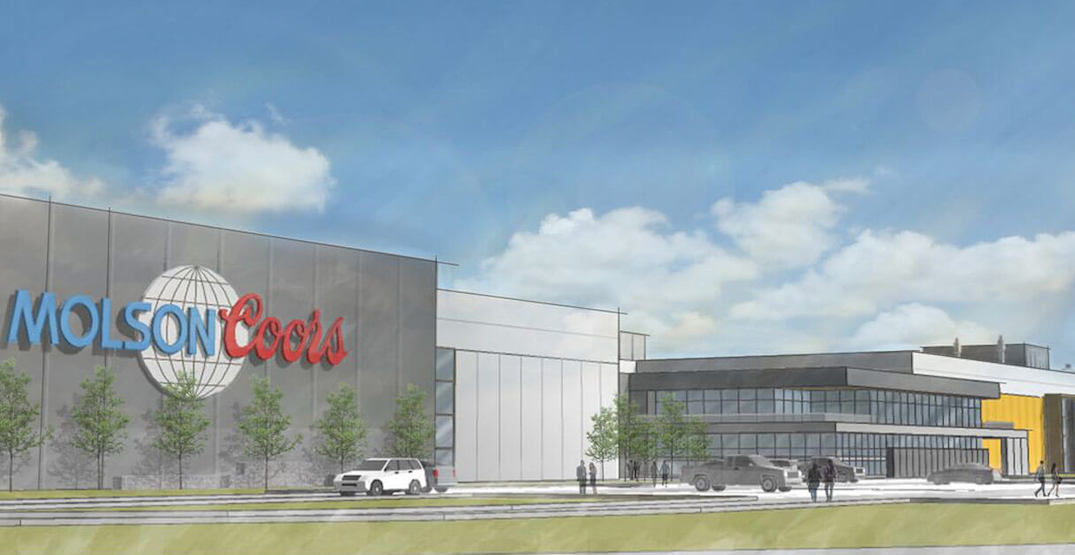 Artistic rendering of the new Molson Coors brewery in Chilliwack. The facility, replacing the Burrard Street complex in Vancouver, opened in September 2019. (Omicron)

Written for Daily Hive by Melinda Friesen, the president of the Abbotsford Chamber of Commerce.

If you live anywhere in the Lower Mainland, there is no doubt you are well aware of the region’s land affordability issue.

But did you know there is another lesser known, but equally important, land use issue threatening our region? While it doesn’t make as many headlines, it is just as critical to BC’s long-term prosperity.

That issue is BC’s dwindling supply of industrial lands: the type of land that fuels almost a quarter (23%) of all BC jobs, and contributes $4.5 billion to our provincial Gross Domestic Product (GDP) every year.

Simply put, industrial land plays a critical role in our economy, and our supply of it is shrinking. Fast.

Unlike agricultural land, industrial lands are not protected, meaning that they can be rezoned for many different purposes. For example, from 2010 to 2015, our region saw a net reduction of 352 hectares of industrial land. As a result, our region’s vacancy rate hovers around 1.6%, with projections suggesting that the Lower Mainland will fully deplete its industrial land supply within the next 10 years.

In the Fraser Valley, cities like Abbotsford have historically acted as the “safety net” for businesses outpriced by the Metro Vancouver land market. But even there, vacancy rates are plummeting.

Currently the City of Abbotsford’s vacancy rate sits at just 0.4%, with a diminishing inventory that has cost the city significant economic opportunities, such as the relocation of Molson-Coors brewery.

Without access to adequately sized and strategically located parcels of industrial land, companies like Molson-Coors are being forced to take their business, and the jobs that come with them, elsewhere. After exhaustively searching for an appropriate 10-hectare parcel of industrial land in Abbotsford, Molson-Coors was forced to relocate its brewery over 20 miles eastward to Chilliwack.

And it is not just large, multinational companies that are hurting from the industrial land pinch; Abbotsford-based agri-food businesses are also being shut out of new opportunities.

These businesses, which collectively generate around 70% of the Fraser Valley’s total agri-industrial economic activity every year, require industrial land to house a wide range of processing facilities.

Unfortunately, attempts by these businesses and others to convert unused, non-arable lands within the Agricultural Land Reserve (ALR) towards industrial land usages are routinely denied, with a recent application to convert 200 hectares of unproductive ALR lands to industrial usage denied by the province last spring.

The impact? The industries that power our regional economy are being hindered by outdated land use policies, hampering our region’s overall competitiveness and thwarting its ability to grow and prosper.

With only enough industrial supply in Abbotsford to last another five years, it is critical that we acknowledge this reality now, and begin to reassess our current land use strategy. We need to create the most effective and sustainable land use plan possible.

If we fail to act, the long-term viability of our region as a business hub and promising economic power will be compromised. Making industrial land more accessible and available is essential to our sustainability as a city of growth and opportunity.