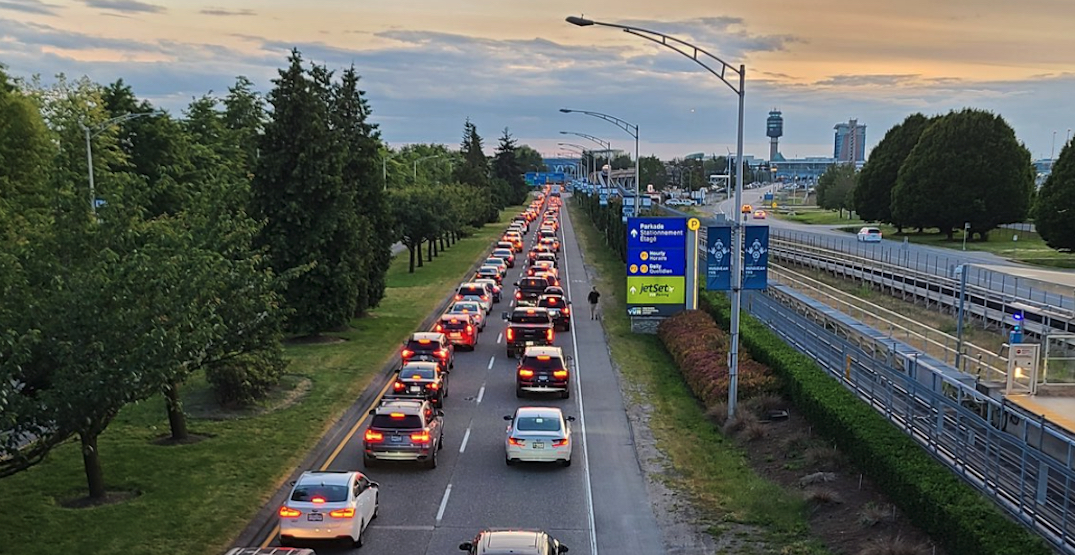 There were social media reports of a two-km-long traffic jam on the roadway, with some reporting they were stuck in their vehicles, inching their way to the terminal building, for up to 45 minutes.

As it turns out, the delays were due to all terminal-bound vehicle traffic funnelling into one lane on Grant McConachie Way for maintenance crews to fix signage along the roadway.

In a tweet, the Vancouver Airport Authority stated that “once we became aware of the traffic delays, we dispatched personnel to have the crew cease their work and traffic resumed to normal.”

The maintenance workers were panned on social media for performing the disruptive work during an active period for flight departures and arrivals at YVR, which should have been performed during overnight or other off-peak hours.

Merry Christmas. On a Monday night in June 😕 pic.twitter.com/xpkeqmlCPo

@yvrairport traffic as far as u can see heading to YVR. Leave early if your heading there I guess pic.twitter.com/F62RubNXns

Thank you, but how on earth does this happen in the first place during prime time? The jam was huge going back about 2km. So much idling and people potentially late for flights.

We are happy to report that once we became aware of the situation, YVR personnel were able to have the road cleared & traffic resumed to a normal flow. Thank you for letting us know!

Social media reports on Tuesday evening showed the return of long lines for security, despite Canadian Air Transport Security Authority’s (CATSA) claim last week that its security staffing levels are back to normal pre-pandemic levels, and that security wait times at YVR have drastically improved. CATSA stated last week it had hired nearly 900 more CATSA screening officers across the country since April.

Federal agency CATSA manages the security staffing levels of Canadian airports, not the local airport authorities like YVR. The delays are due to a combination of a lack of staff following the pandemic layoffs, and complaints by the remaining workers over poor working conditions as a result of the reduced size of the labour force.

But the conditions on Tuesday clearly show there are still major issues with security at Canadian airports, and departures passengers should still arrive earlier than usual as a precaution — at least three hours before international flights and at least two hours before domestic flights. This continues to be the recommendation of the Vancouver Airport Authority.

As a result, the proper maintenance and service levels at YVR, which were greatly reduced at the height of pandemic-stricken depressed passenger volumes, now appear to be struggling with catching up with the pace of passenger growth.

“We are sorry to hear about your bad experience at our airport today. We hope that in the coming months the 100+ companies that work within the airport environment will be able to get back to pre-pandemic levels to meet demand. Until then, we thank you for your patience,” reads a tweet by Vancouver Airport Authority.

Sure glad I’m not in the @yvrairport security line this morning. Unbelievable pic.twitter.com/KpCVRei8RW

We are sorry to hear about your long wait time & the misleading information posted about how long screening should take. These numbers are provided by the Crown corporation, CATSA, which YVR has no authority over. We understand your frustration and thank you for your patience.

We are sorry to hear about your bad experience at our airport today. We hope that in the coming months the 100+ companies that work within the airport environment will be able to get back to pre-pandemic levels to meet demand. Until then, we thank you for your patience.

I’ve never seen @yvrairport (at least parts of it) in such a poorly maintained state. Men’s restroom cubicles in one area. Broken door latches, graffiti, banging doors. Did maintenance crews not get hired back? At least they have satisfaction buttons! #YVR #airports #Vancouver pic.twitter.com/ndWCB1JQK1