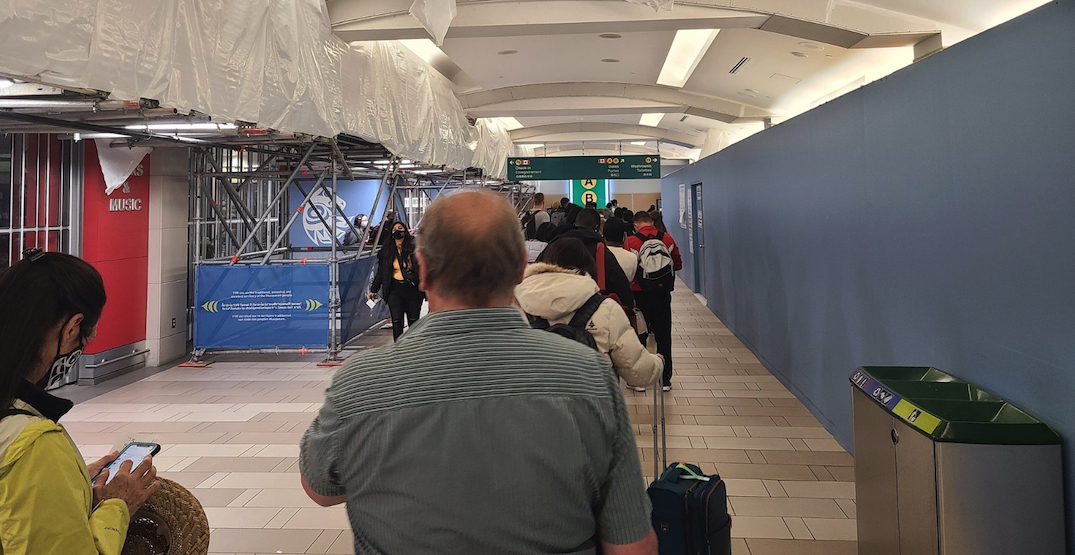 Long line for a security checkpoint at Vancouver International Airport on May 2, 2022. (Kenneth Chan/Daily Hive)

Snaking long lines for security checkpoints at Canada’s major international airports have been a persistent problem in recent months, but the federal government now says conditions have turned a real corner towards improvement.

This follows the hiring of nearly 900 more Canadian Air Transport Security Authority (CATSA) screening officers across Canada since April, with the results of the added workforce now being realized.

According to a bulletin by Transport Canada on Wednesday, CATSA has now met its summer hiring target, and matched its pre-pandemic 2019 staffing levels at the country’s four largest airports.

Over the same periods, Toronto Pearson International Airport’s (YYZ) wait times improved from the average of 26% to average of 13% for departing passengers who waited more than 15 minutes. The issues at YYZ have been particularly severe.

“The Government of Canada recognizes the impact that significant wait times at some Canadian airports are having on travellers. We continue to work with airports, airlines, baggage handlers, and other partners to implement solutions to reduce delays as we approach the summer peak season,” reads a statement from Transport Canada.

“Our efforts are having a positive impact. Current traveller wait times for pre-board passenger screening at Canadian airports continue to decrease.”

“Similar to other large airports in Canada, at various points in the day passengers at YVR could experience long lines for security screening at the CATSA checkpoints. We are strongly encouraging passengers to be patient and be prepared,” reads a statement by the Vancouver Airport Authority to Daily Hive Urbanized, noting that “while the airport is busy, we are currently experiencing no delays.”

To open up the required capacity needed to accommodate the busiest travel season in years, earlier this month, YVR opened its Pier D international terminal building expansion for full use. The $300 million expansion reached completion in early 2021, but the building was largely unused until now due to the previous depressed passenger volumes.