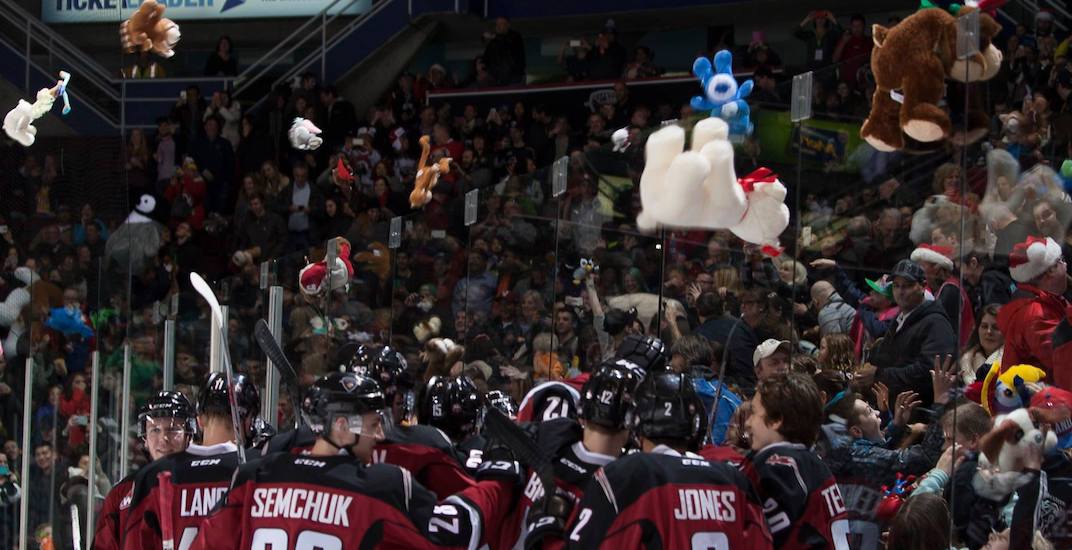 It’s the most wonderful time of year.

The Vancouver Giants’ annual Teddy Bear Toss game is this weekend, and for the first time since 2015, it’ll be held at the Pacific Coliseum. The second of two December games at their old home in East Vancouver, the Giants take on the Victoria Royals on Saturday at 7 pm.

All fans attending the game are encouraged to bring new stuffed toys, toques, mittens, and scarves with them. When the Giants score their first goal, items can be thrown onto the ice.

The stuffed toys will be donated to various children’s charities within the Lower Mainland, just in time for Christmas.

“Teddy Bear Toss is one of the most highly anticipated games of the season and the Vancouver Giants are always trying to set the bar higher when it comes to the Teddy Bear Toss experience for our fans,” said Giants VP Operations & Assistant General Manager, Peter Toigo.

The Giants will be wearing special Buddy the Elf themed jerseys, which will be autographed and auctioned online with proceeds going towards the CKNW Kids’ Fund.

When the Giants host the @victoriaroyals Saturday at the Pacific Coliseum they'll do so in Buddy the Elf Jerseys!

The Teddy Bear Toss game is often the most well-attended game of the season and always makes for an incredible scene, with stuffed toys filling the ice.

The Giants, who usually call the Langley Events Centre home, are enjoying their best season in years. With a 20-6-2 record, the G-Men have the third-best record in the WHL.