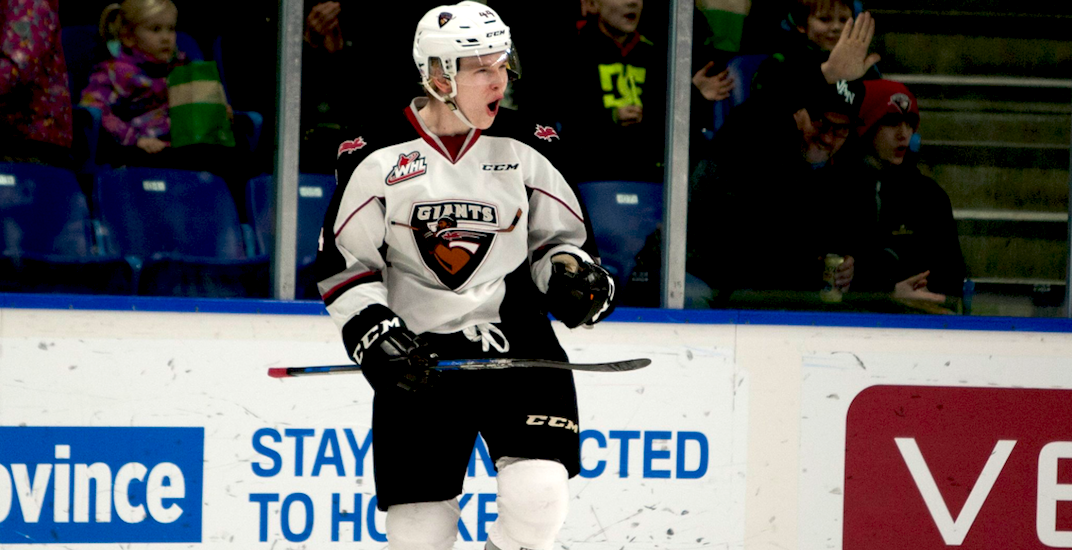 The Vancouver Giants are a powerhouse team once again.

Once perennial favourites, winning a WHL title in 2006 and the Memorial Cup in 2007, the Giants have fallen on hard times in recent years.

After missing the playoffs in four out of five years, the Giants returned to the postseason last spring. The team has taken another step forward this season, holding a 10-2-2 record – good for second-best in the WHL.

A big reason for their success is defenceman Bowen Byram, one of the highest-rated draft-eligible prospects in the world. The 17-year-old already has 12 points in just 15 games so far.

“I want to be the best in the world,” Byram told Daily Hive, his facial expression and tone conveying he’s 100 per cent serious about his aspirations.

And while becoming the best in the world may be a difficult feat, he certainly has the potential to be best player the Giants have ever produced. That’s saying something when you consider their alumni includes the likes of Milan Lucic, Evander Kane, and Brendan Gallagher.

Bob McKenzie’s preseason draft rankings had Byram as the highest-rated defenceman, and the sixth-best overall prospect eligible for the 2019 NHL Draft, which will be hosted by the Canucks at Rogers Arena in June.

The dynamic puck-moving blueliner has a chance to go as high as third overall, which would be the highest any Vancouver Giant has ever been taken (Kane went fourth overall to Atlanta in 2009).

Yet, he tries not to put too much pressure on himself.

“It’s just business as usual,” Byram said. “Like I said, I want to be the best, but I’ve got to keep working hard.

“I just try to come to the rink and work hard and hopefully whatever happens will happen.”

The Canucks, who recently drafted another highly talented defenceman in Quinn Hughes, are one team still looking for help on the back end, and could realistically end up picking in Byram’s range. Clearly if the Cranbrook, BC native ended up as a Canuck, it would be extra special.

“When I was little, I was a Canucks fan,” Byram said, though admitting he has since transitioned to simply following whichever teams are exciting to watch. “There are a couple different teams that I like watching now.”

One of those teams: the Toronto Maple Leafs, featuring not only star forwards like Auston Matthews, John Tavares, and Mitch Marner, but also a talented defenceman that Byram tries to model his game after.

“I like watching Toronto, they have a good power play that I like to learn from, especially Morgan Rielly.”

It’s easy to draw comparisons between Rielly and Byram. Rielly, a fifth-overall selection for the Maple Leafs in 2012, is a gifted skater who combines puck-moving ability and offensive skill with a reliable defensive game – all traits that Byram possesses and prides himself on.

“I think I skate well and have pretty good hockey sense, so I try to use that to my advantage, escaping from guys with my speed,” Byram outlined his biggest strengths. For the Giants, he’s far more than a reliable defensive player – he is relied on to create offence from the back end, frequently jumping in on the attack as a fourth forward and running the team’s power play from the left half-boards.

Rielly is one player that has helped Byram in his development, but the Giant is aspiring to be more than a mere copy of the Leafs defenceman.

“Rielly and [Vegas Golden Knights defenceman] Shea Theodore are two guys that I try to play like, but I’m different in my own way, too.”

Having represented Canada at the under-17 and under-18 levels, most recently at the Hlinka Gretzky Cup, Byram’s talent hasn’t gone unnoticed, and the attention will keep growing until his name is called and he steps up to the draft stage.

But until then, Byram’s focus is elsewhere: “I’m not too worried about that right now,” he said. “I’m just worried about winning games [with the Giants].

“We have to get a lot better if we want to consider ourselves an elite team in this league, but we’re definitely on a good way.”