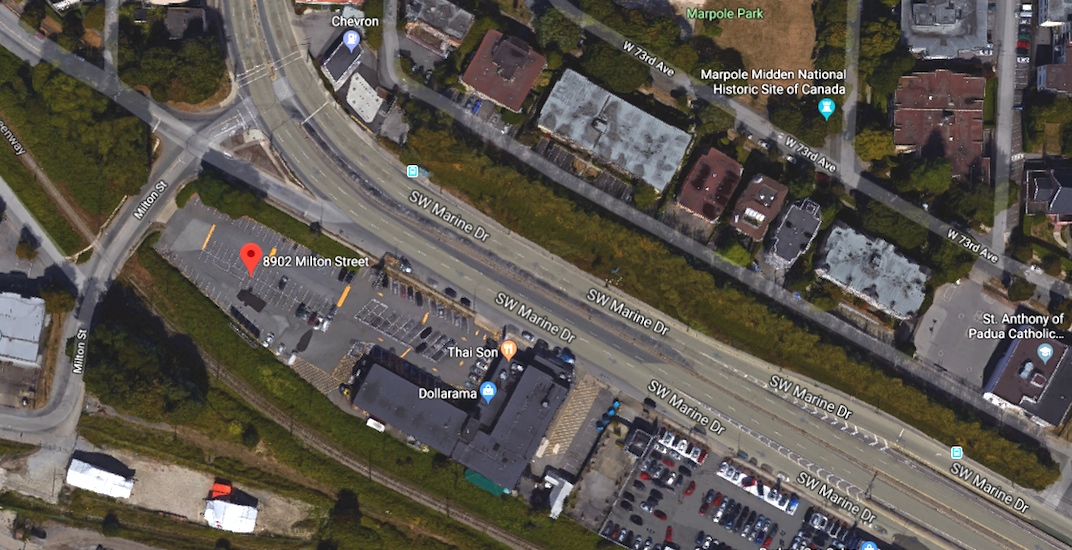 A parcel of land at the southeast corner of the intersection of Milton Street and Southwest Marine Drive – the southern foot of both Granville Street and the Arbutus Greenway – next to the Fraser River in the Marpole area has been returned to the Musqueam Indian Band as part of the City of Vancouver’s ongoing reconciliation efforts.

The municipal government says it has made a decision to donate the property at 8902 Milton Street, known as the Great Fraser Midden, Eburne Midden, and Marpole Midden, to the First Nation. The parcel is a part of c̓əsnaʔəm – the name of the site to the Musqueam.

The property is currently covered with asphalt and used as a ground-level parking lot. It is next to a railway corridor and TransLink’s Vancouver bus depot.

According to the First Nation, the site is a burial ground.

“The site is invaluable in preserving a small, tangible and intangible part of our history and culture that, unlike so much else, has to date survived non-Aboriginal settlement in our traditional lands,” said Musqueam Chief Wayne Sparrow in a statement.

“It is the final resting place of many of our ancestors, and contains belongings of immense cultural value to Musqueam, British Columbians and Canadians.”

The First Nation has made efforts to protect other portions of c̓əsnaʔəm, including its 1991 purchase of the Fraser Arms Hotel to protect the burial site underneath it. It purchased more parcels earlier this decade to prevent any further development.

Now that it owns the site, with the assistance of the municipal government, the First Nation will remediate and commemorate the site to “protect the ancestors and belongings still there.”

The property has an estimated market value of $2.3 million.