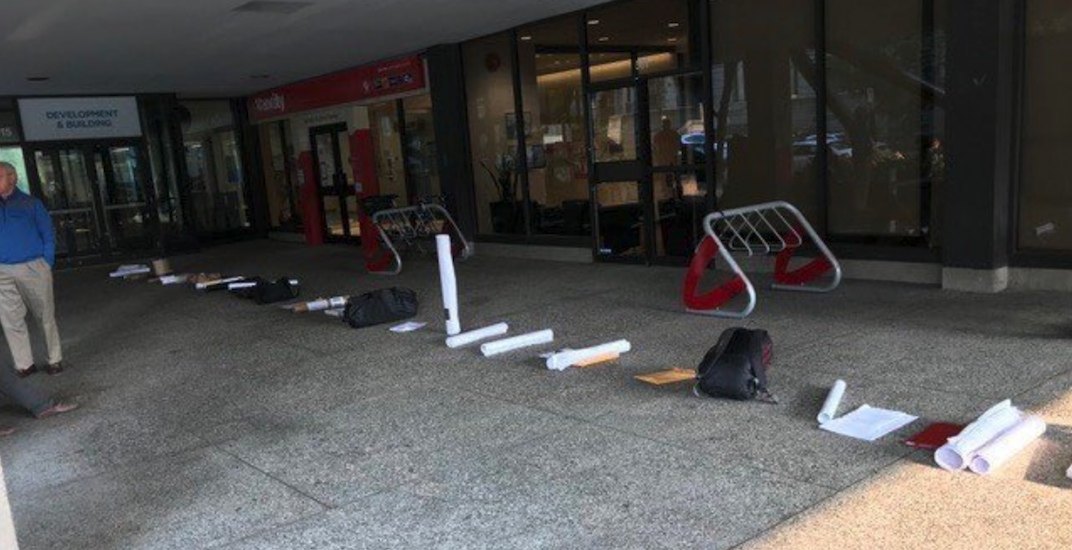 The lineup at the City of Vancouver's Building Permit Office. (David Grewal)

Apparently, architects, builders, and contractors have an unusual and creative method for waiting in line at the City of Vancouver’s Development Permit Office.

Earlier this week, Non-Partisan Association city council candidate David Grewal tweeted a photo of a line with no people stretching out the door of the office located at 515 West 10th Avenue – immediately across from City Hall.

Their items were left on the ground to delineate their place in the line.

“Vancouver architects and builders regularly leave backpacks and plans on the sidewalk to mark their place in the building permit lineup,” Grewal told Daily Hive.

Unfortunately we are at this level of dysfunction. Vancouver architects & builders regularly leave backpacks & plans on the sidewalk to mark their place in the building permit lineup. #vanpoli pic.twitter.com/MeztI1lLQw

Building projects across the City have faced significant delays in recent years, with building permits for new single-family homes and laneway homes taking between 28 and 38 weeks, according to the City.

A separate study found that Vancouver had the longest building permit approval time in the region with an average of 91 weeks.

To cut down on the wait times, Grewal says he wants to allow projects of less than 66 feet wide to proceed immediately to construction if an accredited architect has approved the design.

In the meantime, the City is currently conducting a fast-lane pilot program to expedite the permitting process. It is working with a limited number of “experienced designers and builders,” and if the pilot is a success it could be scaled, with the hope that it will reduce permit times for new single-family homes and laneway homes to just six to eight weeks.

Additionally, over the next two years, the municipal government plans to hire 75 additional full-time staff across three departments relating to permitting to help reduce the backlog.