Strict and inflexible regulations add $644,000 to the cost of constructing a single-family home in Vancouver, according to a new study conducted by the C.D. Howe Institute.

The non-profit research institute says zoning regulations, development charges, and limits on development are responsible for dramatically increasing the price of housing. 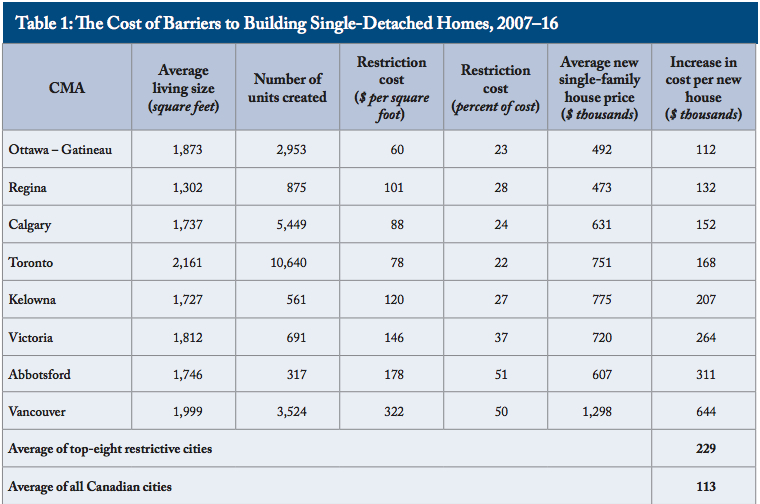 “Restrictions on housing supply hinder the efficiency of the housing market. Delays in building what people demand result in shortages and, therefore, higher prices,” says the study.

“Numerous studies have established that a well functioning housing market results in the market price of housing being close to the feasible cost of constructing it. If prices exceed this construction cost, it is often due to excessive regulations that inhibit new construction.”

In Vancouver, barriers such as a lack of transportation, access to developable land due to restrictive zoning, and other barriers account for about 50% of the cost of housing.  The region ranks among the largest internationally – equivalent to the cost of regulatory barriers in New York City.

Both Vancouver and Toronto, the nation’s urban areas with the largest highest demand, saw construction costs over $350 per sq. ft. in 2016.

“Builders develop land in high-demand urban areas more intensively, providing either higher-quality homes or putting more homes in a given area, both of which increase construction costs per square foot,” adds the study.

But the study notes that the increase of price of housing has “little to do” with the increases in the per sq. ft. cost of construction. Instead, researchers put the blame squarely on municipal and regional governments placing strict zoning rules that limit residential density.

“If there were no barriers to supply, developers would have produced, over the period of this analysis, more housing further along their supply curve – and thus at a higher cost of production – to meet market demand.”

Another major factor relates to municipalities requiring developers to pay for public amenities, such as roads, transit infrastructure, libraries, community centres, parks, plazas, daycares, and social housing. This is particularly the case when developers are pursuing a rezoning.

“While amenities increase the value of housing, requiring developers to finance them results in homebuilders paying upfront for these kinds of services. Development fees are politically popular because they are portrayed as money paid by profitable developers rather than by homeowners.”

Within the eight most restrictive Canadian cities, the extra costs of building a single-family home averages at $229,000. 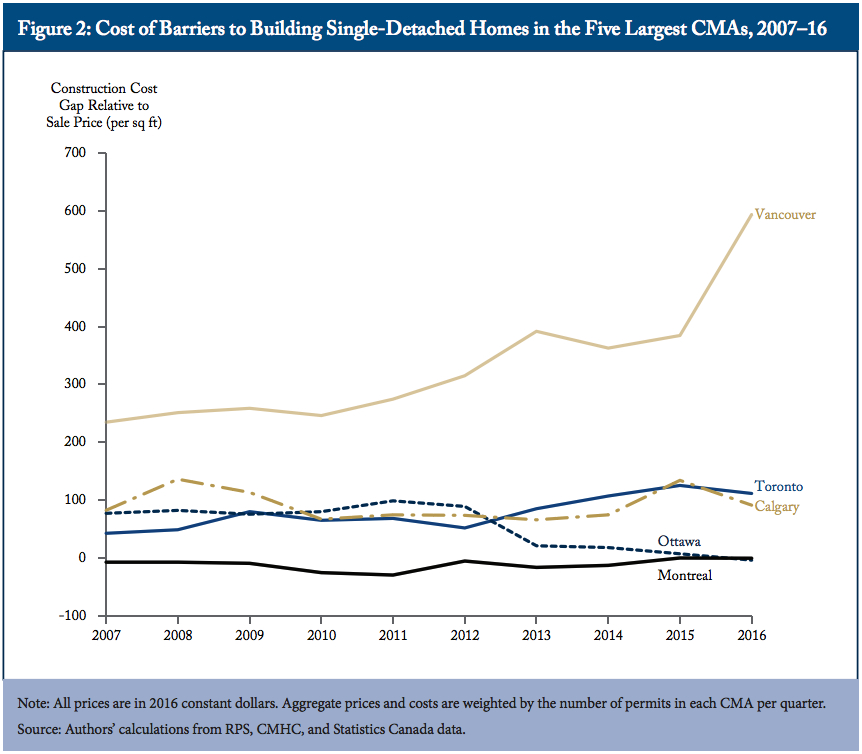