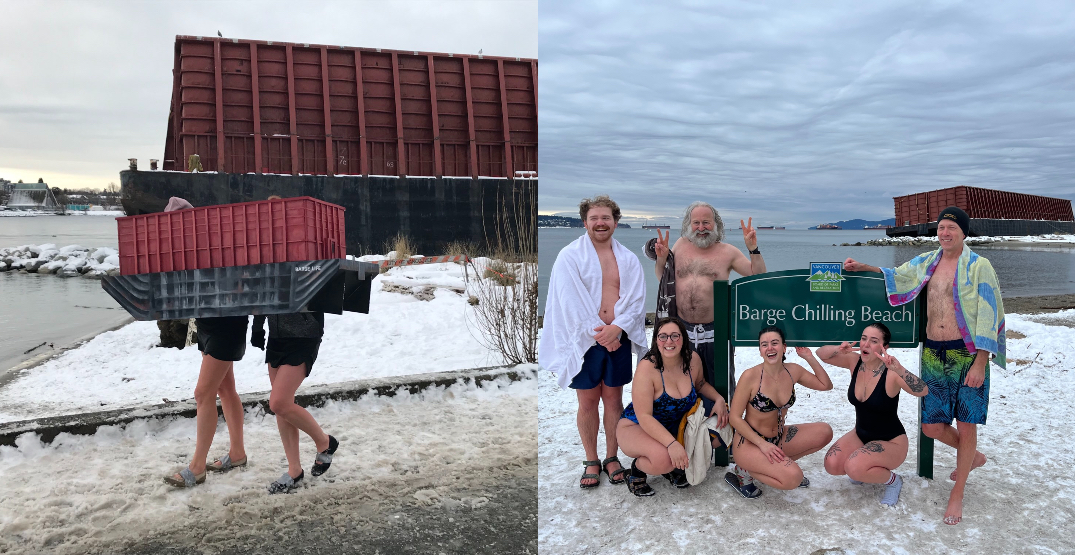 On New Year’s Day, Vancouver’s barge darling was the setting for a mini polar bear swim that paid tribute to the city’s newest attraction.

For 2022, the annual Polar Bear Swim was officially an at-home event for the second year in a row.

Still, there were some folks who braved the icy cold to take a dip IRL in the waters at Barge Chilling Beach.

In photos and videos posted to social media, you can see that there was still snow on the sand as a handful of swimmers marched into the frigid waters.

I found your twin @EnglishBayBarge! He went in for a polar bear swim right in front of you! pic.twitter.com/LW0huvPrVD

One poster called a pair of swimmers the “#bargechilling girls,” saying that they marched into the waters with a styrofoam replica of the barge.

#bargechilling girls! They not only made this perfect styrofoam replica, they also swam in the Pacific ocean. #happynewyear #PolarBearSwim pic.twitter.com/9V2whWqtYy

In fact, the polar plunge duo are a pair of sisters, Tarrin and Sorrel McDonough, known as styrogirls on Instagram.

In a post, they said they were inspired by the “brilliant” barge sign that the Vancouver Parks Board put up. Their mini styrofoam version of the barge is “super seaworthy AND converts into a toboggan.”

#bargeChillingGirls attracting quite a crowd at sunset beach with their creative replica of the beached barge. ⁦@GlobalBC⁩ get a camera here! pic.twitter.com/YDtFhvDYLa

They told Daily Hive by email that their dip was great.  The key is to persevere until the numbing effect kicks in a bit. Then it’s delightful and toasty when you get out!”

“We’ve made a 2-man costume every year since 2012. We love how the beached barge has become a Vancouver folk hero, and decided that a Baby Barge was the perfect choice this year.”
“We’ll continue to do it every year. It’s a fantastic tradition.”
The barge was stranded on the beach by a storm in November, and even though plans have been made to move it, those deadlines have come and gone while the barge remains.

As a gift to the city, the Vancouver Parks Board even put up a sign labelling the area as “Barge Chilling Beach,” much to the delight of locals.