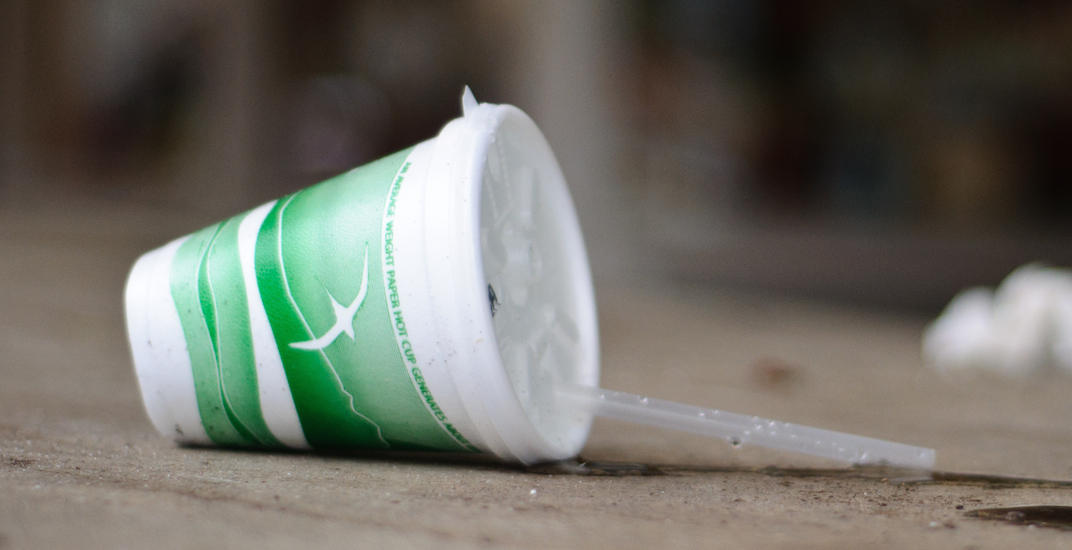 After much debate and consultation over the past two years, Vancouver City Council today voted to approve a ban on plastic straws and polystyrene foam cups and take-out containers.

The one-year gap between approval and implementation will allow for outreach and education to support small businesses as they transition into using more sustainable packaging materials, such as straws and take-out containers made from paper products.

“Cities around the world recognize the detrimental impacts of plastic waste on our environment and are taking bold steps to cut down or eliminate waste through bans and innovative reusable programs,” said Mayor Gregor Robertson in a statement.

“In Vancouver, we’re hearing strong support from local businesses, environmental groups and the general public and I’m confident that this comprehensive strategy will help us become a clean, zero-waste city.”

The City claims it is the first jurisdiction in Canada to ban plastic straws and polystrene foam cups and take-out containers and the “first city in the world to approve a comprehensive zero waste strategic plan.”

In addition to the ban, the municipal government is creating an “early action” strategy to target the reduction of single-use bags, cups, take-out containers, utensils, and straws.

While there was much discussion on banning plastic bags and all cups, that plan has been put on hold. Target reduction rates for these items have been set for 2021, but if the goal is not achieved the City will consider taking further action by enacting a complete ban on single-use plastic bags and cups.

Business license holders in the city will be asked to choose one of the following operational models for single-use items:

All businesses, regardless of the option they choose, must track the number of disposable cups and plastic and paper bags distributed.

However, the municipal government noted that during consultation, some restaurant businesses were concerned about cleanliness and food safety, which is generally provided through the distribution of single-use items. Concerns also related to higher operating costs associated with purchasing non-foam cups and take-out containers.

For businesses that distribute compostable packaging and single-use items, the City mandates that these materials must be “approved compostable” through testing and approval at a local compost facility. According to the municipal government, the reason behind this process is because there are no established standards for what constitutes as recyclable or compostable.

The municipal government will seek interest from the private sector and other organizations to create a citywide travel mug and take-out container exchange program, similar to the to-go-cup program in Freiberg, Germany and the Go-Box program in Portland.

Such programs provide customers with the ability to purchase a reusable single-use item with a deposit, and return it to convenient locations throughout the city. An initial idea is to have restaurants participate in such a program, which will supplement the program’s purpose-implemented infrastructure.

What about disposable utensils and special events?

The City’s new strategy includes requiring business license holders to only provide disposable utensils when requested by customers as this “resets the default behaviour to avoidance of single-use items.”

And event organizers that hold a special event permit with the municipal government will not be able to provide prepared food in polystyrene foam cups and containers at festivals and other special events held on City property.

Mandatory fees or taxes can also change behaviour, such as Ireland’s CAD $0.34 charge on plastic bags which resulted in a 96% reduction. Similarly in Chicago, a 7-cent tax on both plastic and paper bags led to a 40% reduction within the first month.

Neighbouring Seattle’s ban of thin plastic bags and the implementation of a 5-cent fee on paper bags led to a 50% reduction in plastic bags in residential garbage over four years and a 78% decrease in the level of plastic bags collected in commercial and self-haul waste streams.

Taiwan is planning a blanket ban on single-use plastic items by 2030. This will include straws, cups, and shopping bags.

And Toronto previously explored a policy to require vendors to provide customers a 20-cent discount on hot drinks sold in reusable cups, but the policy was not approved.

Today’s approval of the bans and reduction strategies are part of the current City Council’s vision of turning Vancouver into a “Zero Waste” city by 2040.

Data collected by the City indicates about 2.6 million plastic-lined paper cups and two million plastic bags are thrown in the garbage in Vancouver on a weekly basis.

Single-use items such as cups and take-out containers account for over half of all the items collected in public garbage bins, and plastic straws and stir sticks make up for about 2% of the shoreline waste in the city.

The municipal government estimates single-use items cost city taxpayers about $2.5 million per year to collect from public garbage bins and to clean up as litter in public spaces.

Last year, the City of Vancouver’s Park Board considered a ban on balloons at parks, community centres, and other Park Board property, but it was rejected by Park Board commissioners in a final vote.