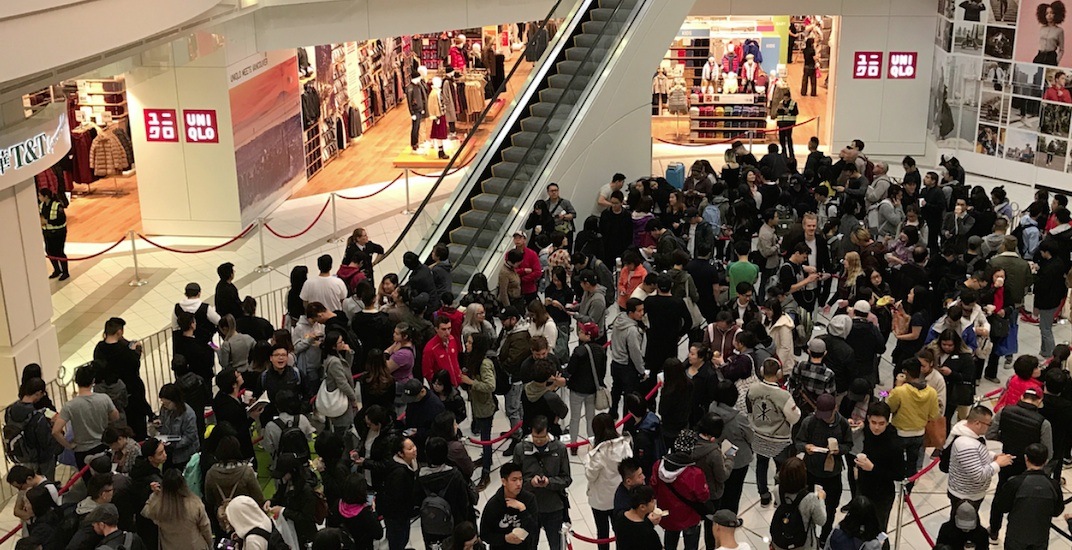 Big crowds at Metropolis at Metrotown this morning for the opening of UNIQLO. (Charles F Champagne / Instagram)

Almost exactly one year after opening its first location in Canada in downtown Toronto, UNIQLO has finally landed in Vancouver.

The Japanese clothing retailer launched its third Canadian store this morning at 10 am, and the anticipation for the store’s opening was instantly obvious.

At the time of writing, the line into the store is relatively orderly as a maze of stanchions have been set up for the expected opening rush.

By the time the store opened, there were already several hundred people waiting in the Grand Court atrium, where the entrance into the 20,800-sq-ft store is located.

Earlier in the week, representatives of UNIQLO told Daily Hive they were expecting a larger grand opening turnout than the retailer’s first opening at Eaton Centre.

Similar to the crazy lines for the recently opened MUJI store at Metrotown, prospective shoppers should expect big crowds and lines at UNIQLO throughout the long weekend.

Exciting morning for Metropolis at Metrotown with first Uniqlo in Vancouver

Always wondered what kind of people would line up for these things on weekdays lol I have waited for this moment for many years!