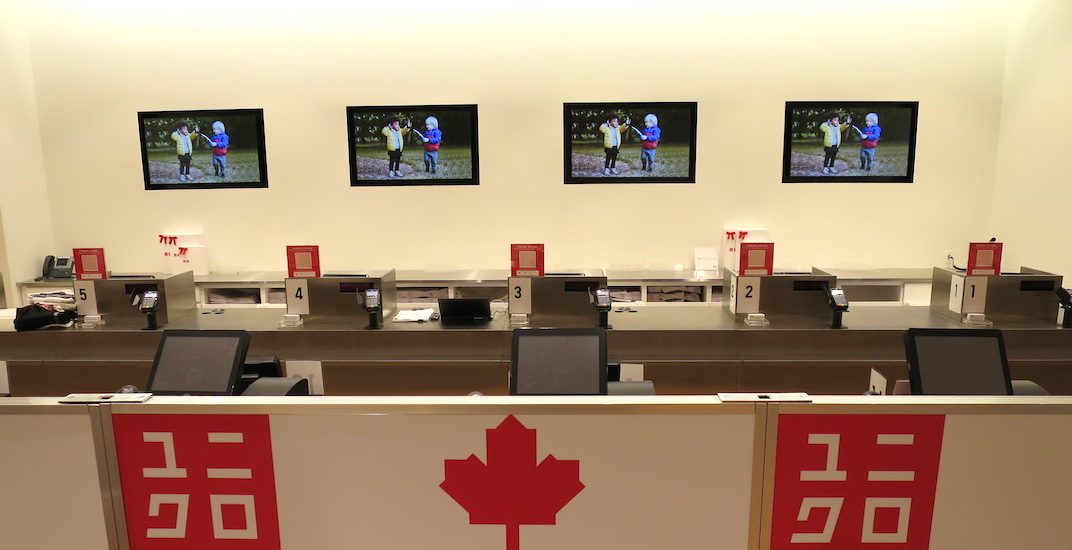 Inside the new UNIQLO store at Metropolis at Metrotown before its opening on Friday, October 6, 2017. (Kenneth Chan / Daily Hive).

Japanese clothing retailer UNIQLO is defying all retail industry trends with its upward trajectory, making it the envy of retailers around the world.

It opened its first store in 1984, but it was not until the early 2000s that it saw explosive growth. Over the past 15 years, it quickly became the largest clothing retailer in Asia, and now it has its eyes set on North America.

Its latest push further into the Canadian market with its first store opening in the Metro Vancouver region cements its intentions in one of the continent’s most important markets.

“Vancouver is a welcoming gateway for Asian immigrants, so it’s a perfect destination for us, a perfect market,” said UNIQLO Founder and CEO Tadashi Yanai, the wealthiest person in Japan, through a translator during a sit-down interview with Daily Hive.

Today’s opening of the UNIQLO store at Metropolis at Metrotown marks the one-year anniversary of the company’s initial entry into Canada with its first store at downtown Toronto’s Eaton Centre. A second store in Toronto opened several weeks later at Yorkdale Shopping Centre.

That is not to say Toronto has been a disappointment, it has certainly been anything but. Yanai says the Toronto stores are “enjoying a very good performance”.

For the company’s first store in Vancouver, as with any new market UNIQLO enters, it is strategically designed with a tailored approach to meet the sensibilities and tastes of the locals.

“I find that people in Vancouver are more outdoor oriented because they’re more outgoing,” he said.

“People seem to enjoy sports, people tend to celebrate everyday life more. That’s all mixed together and people are more relaxed and causally oriented, and that will be echoed and reflected in our store.”

Yanai says it is important for each store to be deeply rooted and anchored in that community, and that is what is required of the retailer.

“What we found out is that in the United States, things are more commercialized, but in Canada it is more lifestyle oriented,” said Yanai. “Therefore life revolves around work, life, and balance, and Canadians like to enjoy all, and that is the expectation in Canada.”

But above all, UNIQLO’s success lies with its unique approach with its product lines, which are high quality basics at relatively affordable prices.

Yanai reaffirmed that the retailer’s expansion into the Canadian market will certainly continue.

He revealed UNIQLO is aiming to open its downtown Vancouver flagship store in spring 2018, and this will be followed by an expansion into a third Canadian market with stores in Montreal.

UNIQLO currently has over 1,800 stores across the world, with the largest store being its 89,000-sq-ft flagship at New York City’s Fifth Avenue.

As for Yanai’s favourite items from his store, his picks are the marina wool sweater, buttoned down oxford shirt in white, and the vest version of the thin ultra light down, which can be worn as innerwear under a jacket.