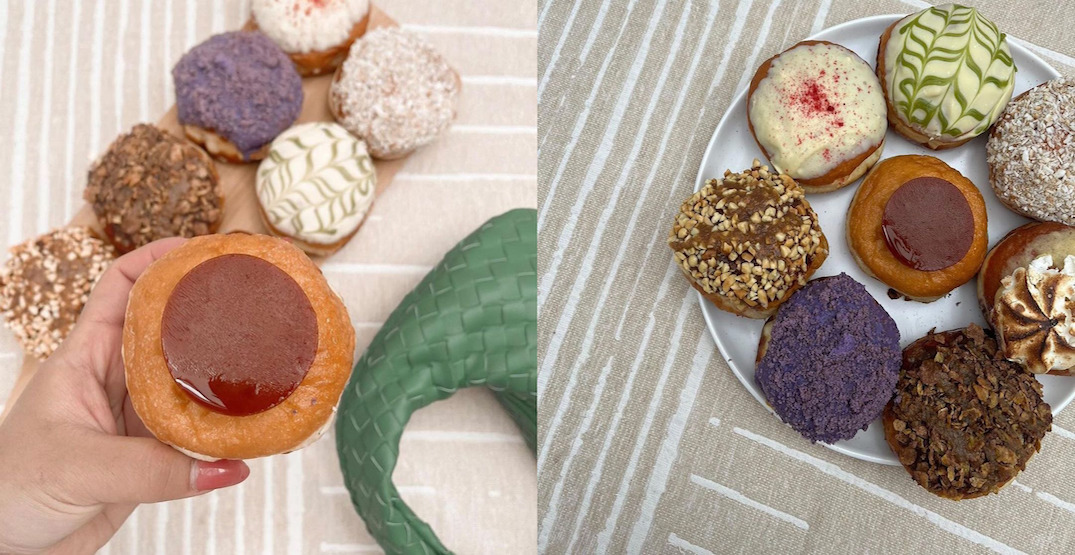 There are a lot of great donut places in Vancouver and among them is a one-woman endeavour that sells strictly through Instagram.

Based in Burnaby, Twins Donuts is a baking project by Leslie G. offering homemade treats in several creative and rotating flavours like dulce flan, strawberry cheesecake, and avocado crema.

Dished had the chance to chat with Leslie a bit about how she got started on her quickly growing business.

Named after her and her wife’s twin babies, the idea for Twins Donuts came to Leslie after she heard about a woman in New York who had started her own donut business from home.

This “became my ‘aha’ moment,” she says, as she had dreamed of opening her own donut shop in Vancouver since moving here from the Philippines seven years prior. Leslie had worked as a sous chef in several downtown Vancouver restaurants in the past, giving her a leg up when it came to the culinary arts.

She started testing out donut recipes, having her wife and neighbours try them out to see if they were good because, as she says, “[I had] never made donuts in my life before, but what I know is how to make good flavours and food.”

The donuts were a hit, and from there she started out with six flavours that she posted on Facebook and Instagram. Her first customer was a neighbour who bought six donuts: “After she tried our donuts she gave us amazing feedback. So amazing that she followed every post we made and posted a comment on how delicious [it was] and how it was the best donut she ever had.”

“After her feedback, it gave me a push to try again for another week,” Leslie shares.

From there, she continued to receive more and more orders, producing donuts twice a week, until the orders became so frequent that she began making up to 10 dozen donuts a day.

“I put a limit to 10 dozen since I wasn’t sure if I was capable of producing it ’cause I am doing it on my own.”

Just as the business started to pick up earlier this year, Leslie was forced to halt operations and “cancelled all the orders due to liability reasons. We were sad, but we had to be more responsible for what we are doing and do it the right way.”

After cancelling all orders around Valentine’s Day, Leslie was only finally able to start back up again during the first week of June.

“We don’t have a storefront – everything is pre-order and pick only,” Leslie says. Each order is a minimum of a half dozen, and Leslie now offers eight different flavours.

“My concept was to create flavours that are not overly sweet and common in the donut scene in Metro Vancouver,” Leslie explains. “Personally dessert is not my thing.”

Her aim is to create donuts that aren’t cloyingly sweet in flavour profiles that will make people want to go for more, not stop at one too sweet treat.

Now that Twins Donuts is back in the game, it’s set to become one of the most popular treat purveyors in Metro Vancouver – an incredible feat in a city that loves its donuts.