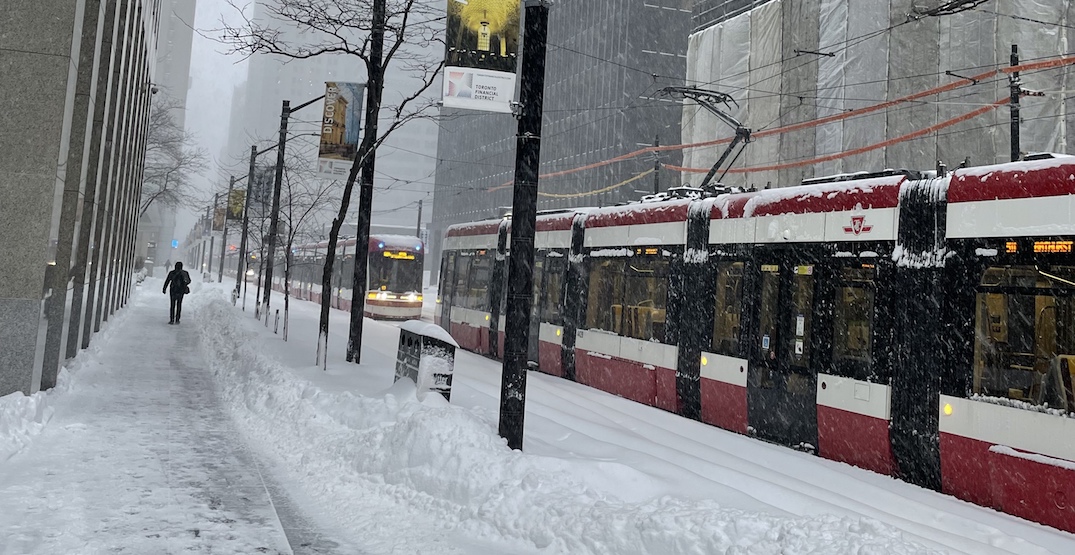 Toronto got absolutely smothered by a thick blanket of snow early Monday morning, and TTC vehicles do not appear to be faring too well, with dozens of streetcars and buses stuck across the city.

The road conditions have caused widespread delays and cancellations as transit drivers are unable to navigate their usual routes.

If you haven’t ventured outside today to see the chaos first-hand (don’t worry, it’s for the best), plenty of Torontonians have shared jaw-dropping photos and videos on social media of the mess that is the TTC right now.

King Street appears to be one of the most affected routes right now, with streetcars backed up all along the road and shuttle buses running in their place.

#TTC #streetcars “OUT OF SERVICE” Lined up as far as the eye can see in both directions on King St West at Peter #ONStorm #toronto pic.twitter.com/Pihe0BQ15u

But other routes — especially bus routes — appear to have multiple vehicles stuck on the roadway.

Be safe out there today in Toronto. Just outside Queen and Dufferin 11 buses stranded. #snowronto #Toronto #ttc pic.twitter.com/0DkPLI6ZYV

I think the TTC needs to borrow our snow tires pic.twitter.com/ox0gA6KXke

@TTChelps @TTCnotices @TO_WinterOps @TO_MainRoads
Its been almost 3 hours since we are stuck & waiting for help in the middle of nowhere,can’t even open the door & walk down the road. Any update? pic.twitter.com/XEHLMP7LEP

Dufferin & Glencairn in front of my Meat Store. That’s how much snow has accumulated since 5:30 this morning. TTC bus stuck pic.twitter.com/3SIzBIrkKD

This Wheel Chair van has been stuck on our road since 6:20 am it’s over 3 hours, Why Hasn’t anyone checked on them from #ttc. Is this how you treat your employees??? pic.twitter.com/9ghvCxZ29w

City plows are currently working away on the roads, trying to clear them of snow so that transit services can begin to resume as normal — or as normal as it can be after a massive blizzard.