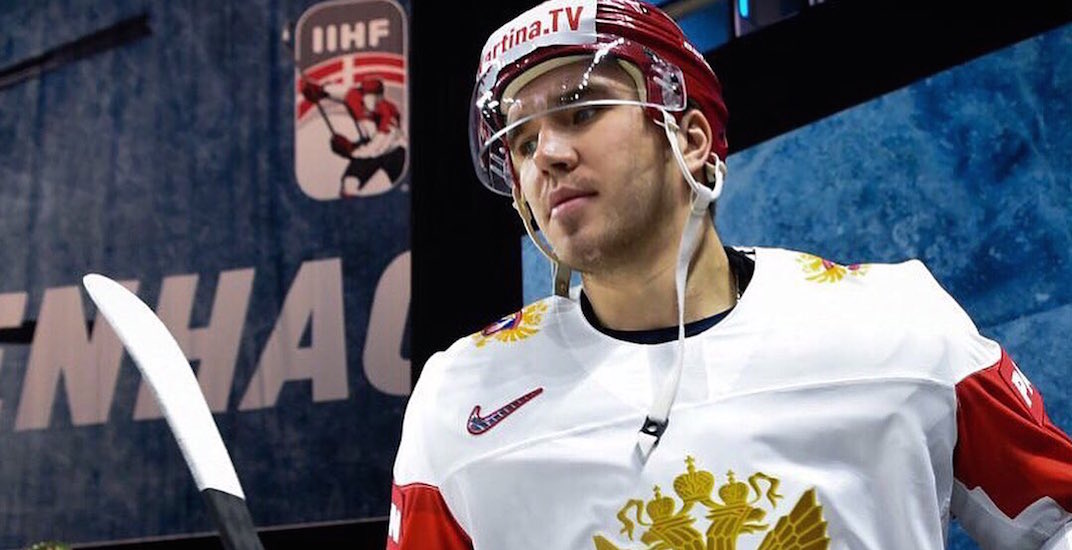 As the Vancouver Canucks go ahead with their efforts to rebuild the franchise, there’s one rather large piece of the puzzle that could come into play.

When Nikita Tryamkin left the Canucks to sign with his hometown team in the KHL last year, it was a gut punch to fans in Vancouver.

The 6-foot-7 Russian defenceman had become a fan favourite in his short time in the city. He represented hope for the future, as the Canucks don’t exactly have a plethora of talented blueliners coming through the pipeline.

And while the Canucks can’t count on Tryamkin ever returning, it’s certainly a possibility.

Tryamkin’s contract with HC Avtomobilist expires on April 30, 2020 – so the Canucks have to go at least two more seasons without him. But after that?

“I will think [of returning to the NHL] when my current contract with Avtomobilist ends, if I will be needed there, if I prove my game, that they would like to offer me a contract,” said Tryamkin in a Russian-language interview last month. “I’m not closing the page with the NHL, but it’s not 100 percent.”

Not only is Tryamkin keeping the door open, he has kept in touch with former teammate and countryman Nikolay Goldobin, as he watches the Canucks from afar.

“I watch the NHL games, first of all, the games of Vancouver,” Tryamkin said. “The time difference is 12 hours, so I wake up before practice to turn on the games, it is interesting to observe how the team is developing. I keep track.”

He’s watching, so they’d better be on their best behaviour.

“I’m in touch with Nikolay Goldobin, he calls me, we keep in touch. He proved he can play well, I’m happy for him. Somehow he’s still being smothered, still influenced by the Russian factor, this cannot be avoided.

While things can be lost in translation, it’s clear that Tryamkin hasn’t forgotten about his former team, and that’s encouraging.

“The Sedin brothers are gone, they made a huge contribution to the history of the club, amazing people who played for 18 years for one club. Now it’s a great chance for the young guys to show themselves.”

Tryamkin will be entering his prime years as a 26-year-old by the time he’s able to play regular season games for the Canucks again. The Canucks’ third-round pick from 2014 could easily be a top-four defenceman by that time.

The towering rearguard had an excellent first season back in his native land. Scoring 25 points (9-16-25) in 51 games, Tryamkin more than doubled his output from his previous KHL season in 2015-16. Tryamkin also led the KHL with 109 penalty minutes, an indication that he wasn’t shy about using his size and strength.

Tryamkin was the highest-scoring defenceman on his team, finishing just six points away from team’s overall scoring leader. He was also +12, placing him third in plus-minus on his team.

For his efforts, Tryamkin played in the KHL All-Star Game and was in the running for Russia’s team at the Olympics in February.

The 23-year-old is currently in Denmark, representing Russia at the IIHF World Championships as his country prepares for a quarter-final game against Canada. He’s been used sparingly on a team comprised of a number of NHL and KHL stars, playing 12:04 per game. Through six games of the round robin, he has one assist and is a +4, with four penalty minutes, and four shots on goal.

Tryamkin appeared to leave Vancouver because of a combination of factors, including ice time and family reasons. But if the Canucks young players develop and the team shows promise, Vancouver could be an enticing option for Tyamkin in two years. And he could be coming back at precisely the right time, when he and other young players in the organization are ready to make an impact.