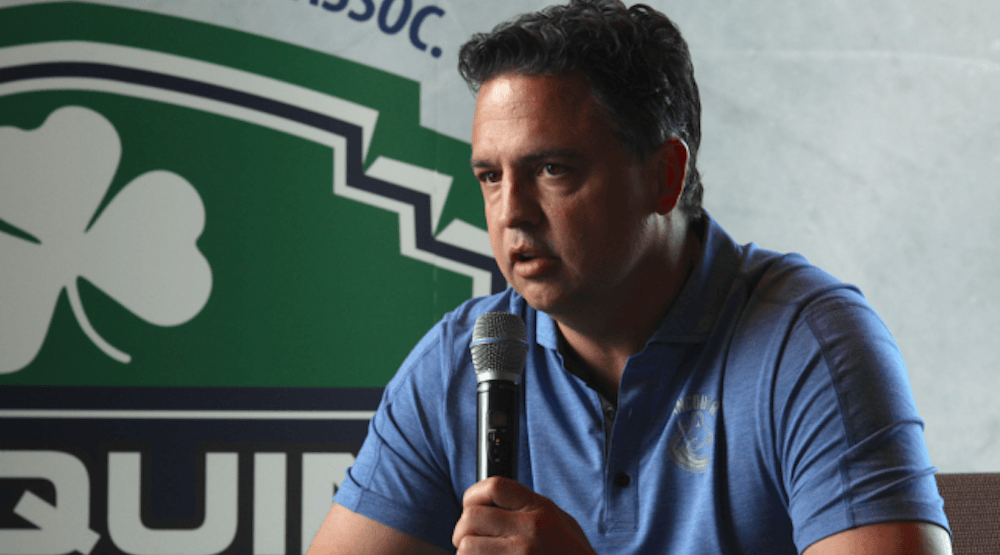 Less than five minutes into his introductory press conference after being named head coach of the Vancouver Canucks, it was clear that Travis Green is an excellent communicator. He was clear, concise, and insightful in getting his message across to the media.

But for as good as he was answering questions at a podium, it’s always interesting to see how a coach speaks about his philosophy in a more casual setting.

Green was in Burnaby last July, then as the head coach of the Utica Comets, for the annual Team Snap Hockey Coaches Conference (this year’s conference takes places July 14-15).

Before an audience of coaches ranging from minor hockey to professional coaches, Green was quizzed on how he approaches the game from moderator Craig MacEwen.

In the 39-minute video obtained from the Coaches Site by Daily Hive, Green is open and candid about how he goes about his business as a pro hockey coach. It’s a nice peek into who the Canucks are getting as their next head coach.

The coach from Castlegar came across as humble, yet firm, which is an approach that will lend itself well to winning over the Vancouver market during a tough time.

Here are six of the more interesting talking points from the new Canucks head coach that still hold relevance to today:

Given Green’s humble approach, it’s not surprising that he doesn’t want a bunch of “yes men” working for him.

He says he likes having two of his assistant coaches own a special teams unit each, as is common practice.

He’ll get input from his coaching staff, that he describes as its own separate team. And he wants to be challenged.

“I want feedback, I want to be challenged.”

This is not a man stuck in his ways.

“I think if you have a coach that does too much on his own, you run into problems. Sometimes you don’t see everything. If you have good coaches and you have a good team chemistry, you can trust each other and lean each other when times are hard.”

While Green acknowledges that every player is unique and that different approaches need to be taken for different personalities, he is hard-lined on one thing: effort.

“Effort, for me, is non-negotiable. You’ve seen it at lots of levels where your best player gets more rope than other players. To a point that happens during games, but during practice it’s non-negotiable.”

It’ll be interesting to see how Green mixes with Jake Virtanen, who he knows well from last season in the AHL, or Nikolay Goldobin, who was at odds with Willie Desjardins.

Honesty is a recurring theme with the 46-year-old coach.

While Green says most good coaches take losses to heart, he also says that you’ve got to be honest about your team.

He explained how he doesn’t let losses “destroy” him.

Good thing, too, because he’s about to go through some hard times with a young Canucks team.

Green wasn’t dealt the best hand with the Comets, particularly in his first season when Utica went through an 0-10 start to the season. That was also the start to his pro coaching career, and that made him question what he was doing.

The AHL rookie head coach analyzed what he was doing, but stuck to his guns, and the Comets rebounded quite well for the rest of the season.

But how does he deal with nights where his team does all it can, but still loses because they’re overmatched? Well, he explained it well with the “5-2” story.

Coaches on his staff began asking him what it meant. After being secretive about it at first, he opened up.

“Well if we lose 5-2 tonight, I’m happy,” Green said, retelling the story. “I’m not going to come in here and tear someone a new ass. I’m going to take a deep breath after the game. I’m not going to walk into the room and lose it on them.”

“There’s nights as a coach that you want to win so bad, but you know you’re up against it. Your team might play great, and you might lose.”

Green didn’t take this approach because he doesn’t care about winning, but he says when he has an honest frame of mind, he coaches better. And sometimes, his team surprised him.

“We’ve won a lot of those nights when I thought ‘you know what, there’s no way we can win tonight with this group.’

“When a group really comes together and gives you everything they have, you’re capable of winning on any given night.”

4. What to do during the dog days

Coaches are said to have a shelf life with players, and there’s a lot of logic behind that reasoning. There’s only so many times a player can hear the same message over and over before tuning it out.

That’s why it’s important for coaches to mix it up.

No, I’m not talking about a “change up.”

During the dog days of a long season, Green uses humour to ease tension.

“We’d start talking about dating a girl, and how it related to a hockey game.” Green remembered with a smile. “And the guys just loved it. It would lighten the room up.”

Not every coach is like this, of course. Some coaches take a business approach to everything, but that’s not Green.

“It’s a long season, it’s important to not be business-like all the time. I want the players to have fun. I want them to come to the rink and enjoy being at the rink.”

Longtime Canucks fans are familiar with the approach of Mike Keenan and John Tortorella, who weren’t afraid to call out players in front of the entire team.

“There’s nothing more powerful than a player watching himself (on video). I’ve never wanted to embarrass a player in front of the team, I can probably count on one hand how many times I’ve done that.”

Instead of embarrassing a player in front of his teammates, Green will bring players into his office to show them video clips privately.

“I tell them ‘I don’t want to show the team this, cause I’d be embarrassed for you,'” he says.

The Canucks have been criticized a lot in recent years for their perceived lack of interest in advanced stats.

While Green says they didn’t have much of an opportunity to use analytics with the Comets – data is not as readily available in the AHL – he says they’re important.

“It does show you areas of the game, that I think are important.”

Utica tracked shots, hits, turnovers, blocked shots, and penalties drawn, which they used to give their players a score. Green also said he’s interested in breakouts, and denying breakouts from the opposition, so expect some analysis with regards to that next season.

“Any advantage that you can use, I’m all for.”

Good thing, because with the roster he’s likely going to get in his first year, he’s probably going to need it.