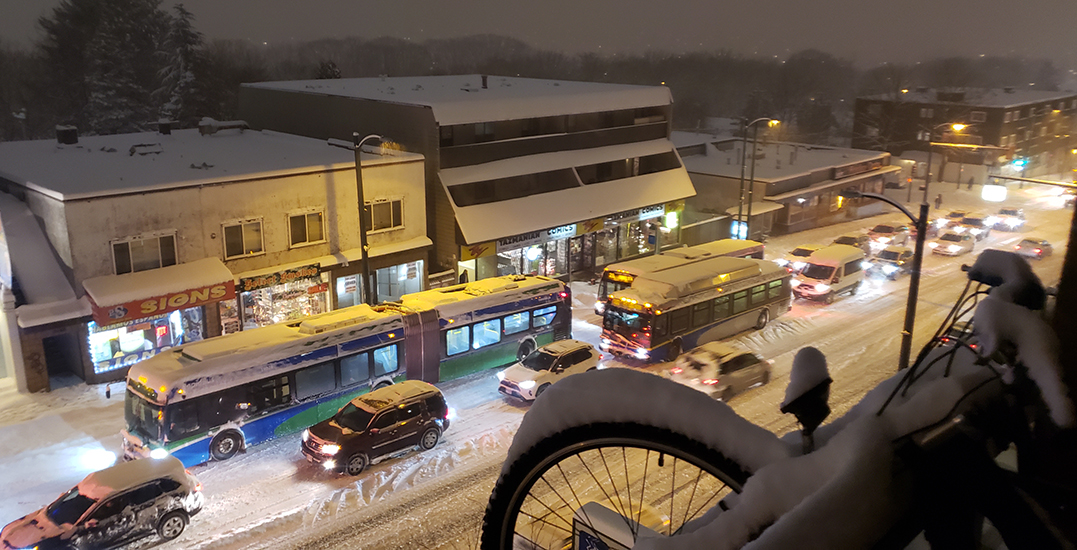 Ben Murphy, TransLink Spokesperson, says in a statement that “there will be significantly slower service on the transit system today.”

“Customers are asked to consider whether they need to travel today,” writes Murphy in an email. “And, if there is a need, whether they could consider travelling outside of rush hours, as commutes will take significantly longer than usual.”

Transit staff are doing everything they can to ensure transit continues to operate. Extra SkyTrain Attendants are on trains and in stations clearing snow and ice from the platforms and doors. ^at pic.twitter.com/omWTQlMZq6

Bus users are reminded to check transit alerts before travelling and to be prepared for any adjusted road conditions.

HandyDART will only be operating at essential service levels until further notice.

SkyTrain will also be heavily affected. The poor weather conditions will likely cause crowding on platforms and limit the number of cars running.

Earlier on Tuesday morning, TransLink announced that the Expo and Millennium Lines were facing system-wide delays due to freezing door and train issues.

King George Station in Surrey has also been closed due to track and weather conditions.

A snowfall warning remains in effect for the region, as total amounts of 10 to 15 cm are expected.