After two years of study and public consultation on the first major changes to the public transit system’s fare structure in decades, TransLink is making the recommendation to introduce a distance-travelled fare system for SkyTrain, SeaBus, and the future Surrey light rail transit system.

This would eliminate the long-running zone-based system on these modes of transit. However, in favour of simplicity, all buses will continue to use the existing flat rate system.

Zone-based systems will also be retained for the West Coast Express.

Work towards the implementation of the changes will follow after another public consultation process, which begins today and runs until June 29. Input from the latest round of consultation will then be used to refine the final plan for approval by TransLink’s Mayors’ Council and Board of Directors later this year. 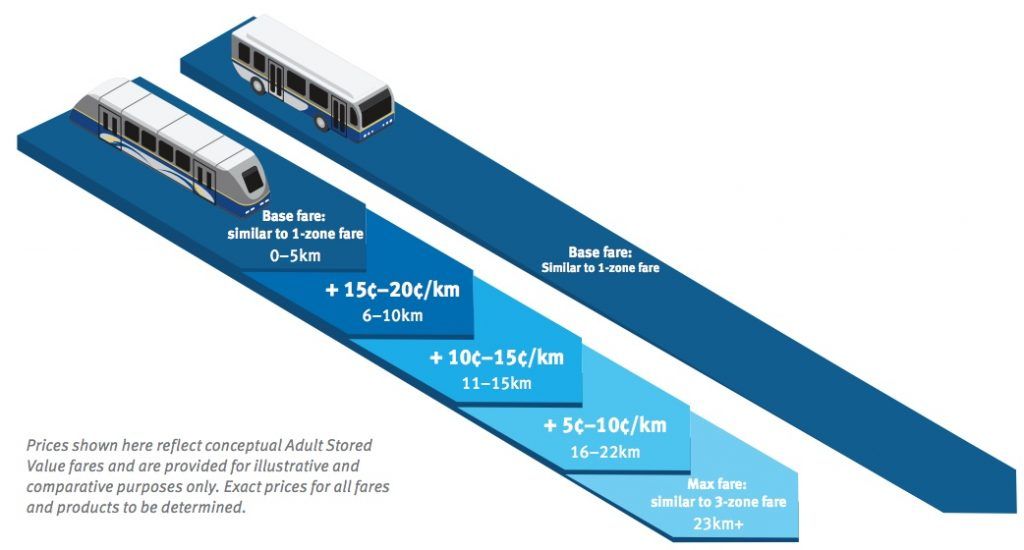 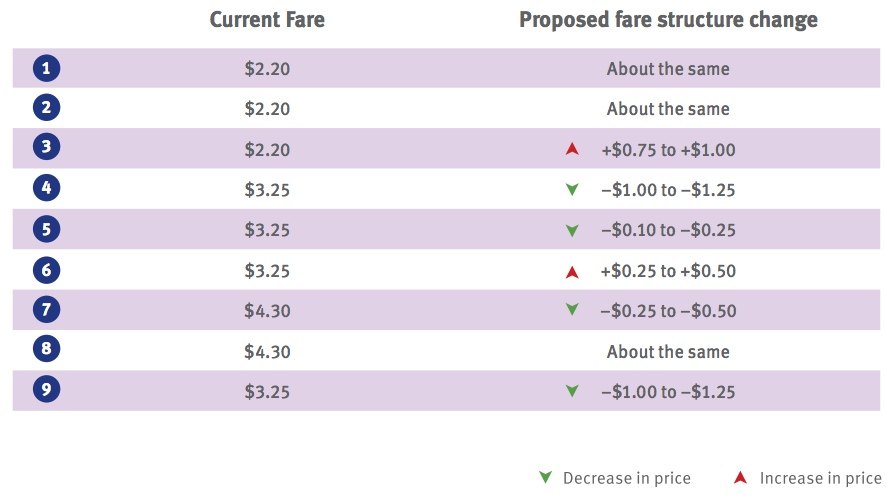 Under a distance-travelled fare system for SkyTrain, fares would be based on the kms a passenger travels, with a base fare covering up to five km or about three to four stations.

After traveling through the base fare’s distance, the fare would increase in small increments until a maximum fare is reached, which would occur at around 20 kms or 13 to 15 stations.

Passengers who travel long distances within one-zone trips on SkyTrain can expect to pay more, such as trips between Waterfront Station and Marine Drive Station or between Sapperton Station and Gilmore Station.

Those who will be paying less than today’s zoned rates include passengers travelling short two-zone trips on SkyTrain that cross a zone boundary, such as trips between Joyce-Collingwood Station and Metrotown Station or between Production Way-University Station and Burquitlam Station.

Some three-zone trips on SkyTrain will also be cheaper, like trips between Scott Road Station and Joyce-Collingwood Station as the passenger only crosses the next zone boundary by only a few stations.

SeaBus trips, which are currently a two-zone fare for a three-km-long travel distance, will cost less as well. 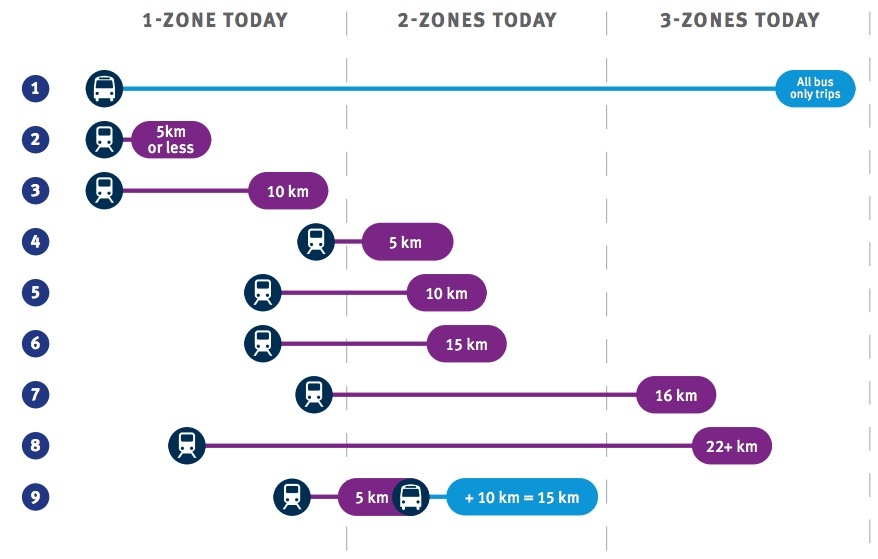 With these changes, the maximum fare would be equivalent to the current three-zone fare, and evening and weekend off-peak discounts would be maintained.

Changes to monthly passes too

The adult pre-paid monthly passes as we know it will end. It will be replaced with a new pre-paid pass based on kilometres.

Passengers with the new pre-paid monthly pass will have unlimited SkyTrain and SeaBus trips based on the distance purchased. If there is a trip that exceeds the distance covered by the pass, passengers would pay the difference for that trip using Stored Value from the Compass Card, similar to the current system.

Unlimited bus travel regardless of distance is retained for all pre-paid monthly passes.

For instance, the current one-zone monthly pass price of $93 will only cover a five-km-long distance in the new pre-paid monthly pass system. Current SkyTrain travel within Vancouver on a one-zone pass currently allows for a distance greater than 10 km, but this will cost about $30 more under the new system.

Pre-paid passes for concession passengers will remain as a flat rate over the interim.

While the existing pre-paid monthly passes run on rigid validity periods from the start to the end of a calendar month, the new system could introduce rolling passes, with validity beginning on any date during the month and lasting until the same date the following month.

This could provide additional flexibility and help reduce the crowds at fare vending machines at the start of every month when many passengers currently renew their monthly passes.

No changes to buses

TransLink says it previously considered distance-travelled pricing for the region’s bus routes, but this is no longer being considered.

There are concerns that such a distance-based fare system on buses would make it difficult to predict and calculate fares.

As well, the added passenger measure of tapping out on buses before disembarking could discourage bus use and add to bus travel times.

Distance-based fare systems could be introduced to buses in the future with new technologies being tested in other cities around the world that do not require tapping out. 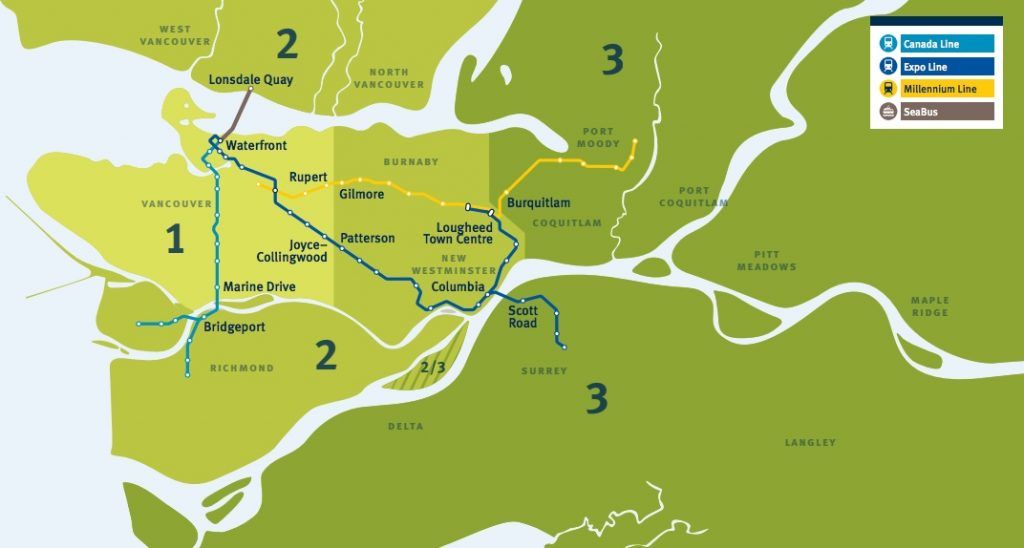 The existing three-zone fare system was introduced in 1984, prior to the introduction of most of the region’s major transit services. Travel patterns have also greatly changed ever since, necessitating a new fare system.

TransLink claims about 20% of daily weekday trips pay an “arbitrarily” higher fare than trips of a similar distance simply because they cross a zone boundary.

Distance-travelled fare systems have been adopted for decades on many major transit systems around the world, such as Hong Kong and Tokyo. The relatively recent installation of fare gates on SkyTrain and SeaBus, coupled with the smart card payment system, allows for such a fare system switch.