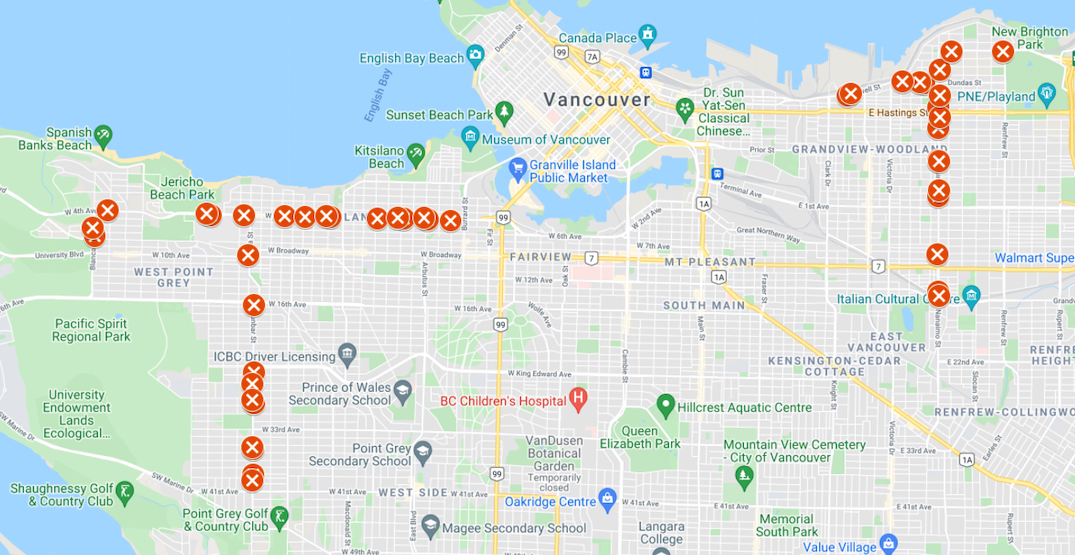 Map of the bus stops that will be removed on TransLink bus routes No. 4 UBC/Powell, and No. 7 Dunbar/Nanaimo, starting January 17, 2022. (TransLink)

In an effort to speed up and improve the reliability of buses, TransLink is removing a combined total of 37 stops from two bus routes that run within Vancouver, including 13 stops that both routes share.

The major changes begin Monday, January 17, 2022, removing stops that are spaced too closely together on No. 4 UBC/Powell and No. 7 Dunbar/Nanaimo. Both routes use trolley buses.

On the No. 4, 15 stops will be removed eastbound and nine stops will be removed westbound, affecting about one in six stops on this particular route. The public transit authority indicates this route has some of the closest stops in the region, with 65% of the stops less than 300 metres apart — under two city blocks.

It is estimated 92% of No. 4 passengers will not need to change how they get to a stop, and the changes will lead to travel time reductions of over four minutes per round trip.

As for No. 7, TransLink will remove 19 stops eastbound and 15 stops westbound, with 87% of riders maintaining their existing way of reaching a stop. The stop removals will result in time travel reductions of over six minutes per round trip. Currently, 77% of the No. 7’s stops are under 300 metres apart.

Generally, for those affected, it is a short walk to the next closest bus stop, and the streets these routes travel through are pedestrian friendly.

TransLink expects these measures of “bus stop balancing” will reduce its operating costs by $215,000 or 1,700 weekday service hours annually, which could be redirected to improving other services.

Bus bulbs, extensions of the bus stop’s sidewalk into the curbside lane, will also be installed at select busy stops. This reduces the travel time from buses having to leave and enter the travel lane to reach a bus stop.

TransLink expects these measures of “bus stop balancing” will reduce its operating costs by $215,000 or 1,700 weekday service hours annually, which could be redirected to improving other services.

Currently, both routes are amongst TransLink’s slowest travelling bus routes on the entire network.

Editor’s note: the article has been edited to account for the shared number of stops that will be removed.