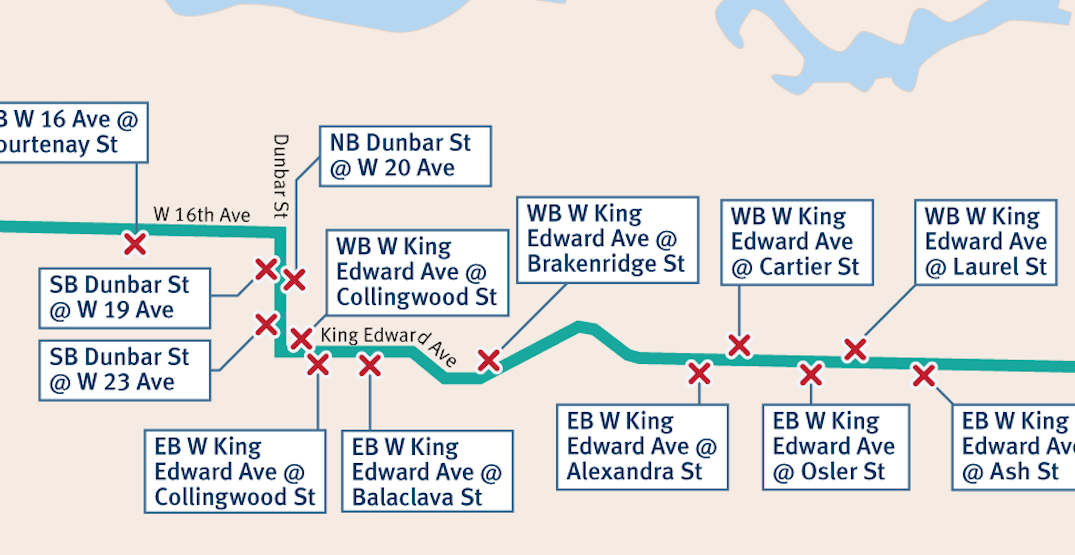 Bus stop removals on the No. 25 UBC/Brentwood Station. (TransLink)

Two major bus routes serving Vancouver will see a reduction in the number of bus stops starting on April 12, in an effort to speed up and improve the reliability of the buses.

TransLink states the No. 25 UBC/Brentwood Station route will see about one in eight of its bus stops removed, with most of the removals located west of Cambie Street and east of Nanaimo Street. None of the stops within the UBC and Burnaby routes will be removed. Currently, No. 25 has 150 stops in a single round-trip.

According to the public transit authority, based on Compass trip data, 97% of passengers on the No. 25 will not need to walk to a different bus stop. The changes specifically target stops with lower passenger volumes and located within very close proximity to other stops.

Travel times will decrease by over four minutes for each round trip as a result, and the public transit authority will save $140,000 or 1,300 weekday service hours annually.

Bus stop removals on the No. 25 UBC/Brentwood Station. Click on the image for an enlarged version. (TransLink)

For the No. 17 Oak/Downtown route, about 20% of the bus stops will be removed. The proportion for removal is higher as 77 of the stops on this route are less than 300 metres apart or roughly two city blocks, and in some cases, the stops are directly across the street from one another — under 75 metres apart.

TransLink anticipates 92% of passengers will not need to change their travel pattern, and there will be a reduction of four minutes in round-trip travel time. About $110,000 or 1,000 weekday service hours annually will be saved.

Bus stop removals on the No. 17 Oak/Downtown. (TransLink)

For the small proportion of passengers affected by the changes, most will only have to walk only a few minutes at the very most to their next closest stop, which is in most cases about one city block away. These areas are generally highly walkable environments.

By reducing the frequency of the deceleration of buses to pull into stops and the resulting need to re-enter traffic and accelerate, the travel times and reliability of the bus routes will be improved. The public transit authority also suggests the operational cost reductions could be redirected to other routes in need of more service.

A final decision on permanent stop removals will be made later this spring after consultation with the public. Additional routes could also see this practice of select stop removals.

Last year, TransLink completed its first “bus stop balancing” initiative of removing about 25% of the bus stops on the No. 2 Downtown/Macdonald route.

Other recent measures to speed up buses include bus-only lanes, queue jumpers, and curbside bulges at stops to reduce the need to pull in and out of stops.

In 2019, a TransLink report stated that 80% of the region’s buses were travelling slower compared to five years prior due to factors such as rising congestion, a lack of bus priority measures, and stop spacing. The delays result in an estimated $75 million in extra operating costs annually to account for the additional buses that need to be deployed to maintain scheduled frequencies.