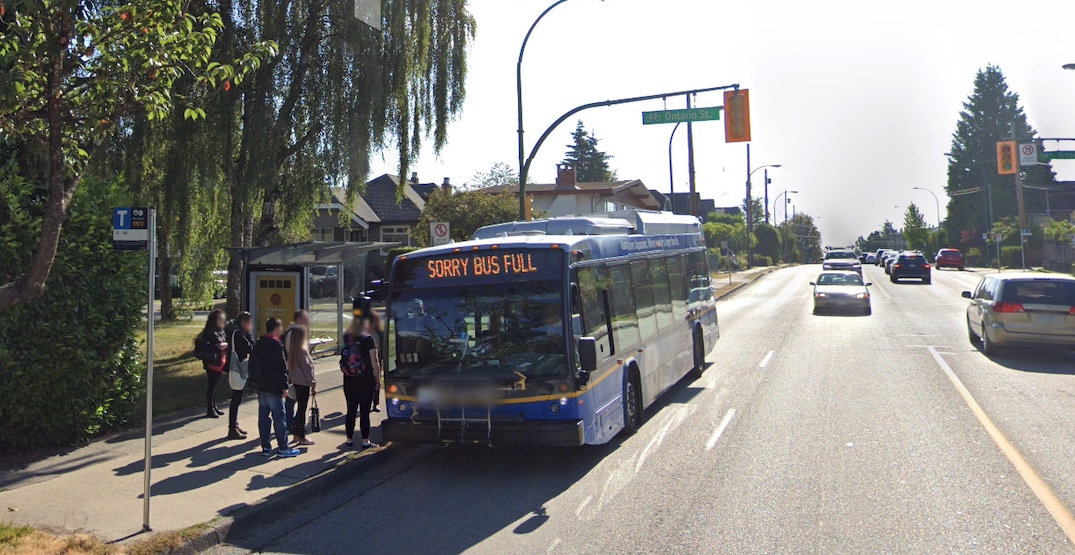 The westbound bus stop for the No. 25 UBC/Brentwood Station bus route at the intersection of West King Edward Avenue and Ontario Street. (Google Maps)

The practice of “bus stop balancing,” which removes stops too closely spaced together, will be introduced to two additional bus routes serving Vancouver.

In a report ahead of this week’s Mayors’ Council meeting, TransLink has indicated it plans to remove excess bus stops along the No. 17 Oak/Downtown and No. 25 UBC/Brentwood Station routes.

Both the No. 17 on the Oak Street corridor and No. 25 on the King Edward Avenue corridor will see their changes at some point this year, and potential additional corridors are in the process of being confirmed. The No. 25 is the region’s fourth busiest bus route.

Buses add to their travel time when they have to decelerate more often and pull in and out of the traffic lane at the stops.

This follows the public transit authority’s pilot changes last fall on the No. 2 Macdonald/Downtown, which resulted in the removal of 25% of about 90 bus stops along the entire route. TransLink previously indicated the changes on the No. 2 could save $140,000 in annual operating costs and 1,300 weekday service hours, which could be redirected to other bus routes in need of improved service.

Throughout the Fall/Winter 2020 period, TransLink completed eight projects to speed up buses, including bus-only lanes on a portion of Granville Street south of West 16th Avenue, and Kingsway and Main Street within Mount Pleasant. These projects include 18.3 km of bus-only lanes, 6.9 km of tactical changes, and four km of bus bulbs.

This is in addition to five projects completed in Summer 2020.

However, there is currently no performance statistics on the latest projects — the improved speed and reliability of buses — due to the ongoing issues from the ransomware attack on TransLink in December.

Other than the bus stop balancing projects on Oak Street and King Edward Avenue, TransLink is anticipating to complete eight more projects to speed up buses throughout 2021. This includes bus-only lanes along Burrard Street from Pacific Street to West Cordova Street, and an expansion of bus-only lanes on West 41st Avenue near Willow Street and on King George Boulevard from 102 Avenue to 96 Avenue.

Changes along Scott Road, 120 Street and 72nd Avenue in Surrey and Delta will add bus stop curbside bulges to allow buses to stop on the traffic lane, instead of having to pull in and out of the curb lane. These improvements reducing travel times by up to three minutes add to future planned changes to accommodate the R6 Scott Road RapidBus, which is expected to launch in September 2023.

TransLink has also resumed planning for the future R7 RapidBus, which saw its design work suspended last year due to COVID-19. This will be a RapidBus route between the new bus loop at the Canada Line’s Richmond-Brighouse Station and a yet-to-be-named Expo Line station. The public transit authority previously indicated Metrotown Station as the possible terminus stop connecting to the Expo Line.

In under two years, TransLink’s partnership with municipal governments has conducted 21 “rapid response” projects that speed up buses at an estimated cost of $2.4 million.

Municipalities can apply to TransLink for funding from an annual competitive program to deliver “quick win” pilot and longer-term projects to speed up buses. TransLink awarded $3.725 million for such projects in 2020, and this funding will be increased to $4.15 million in 2021. 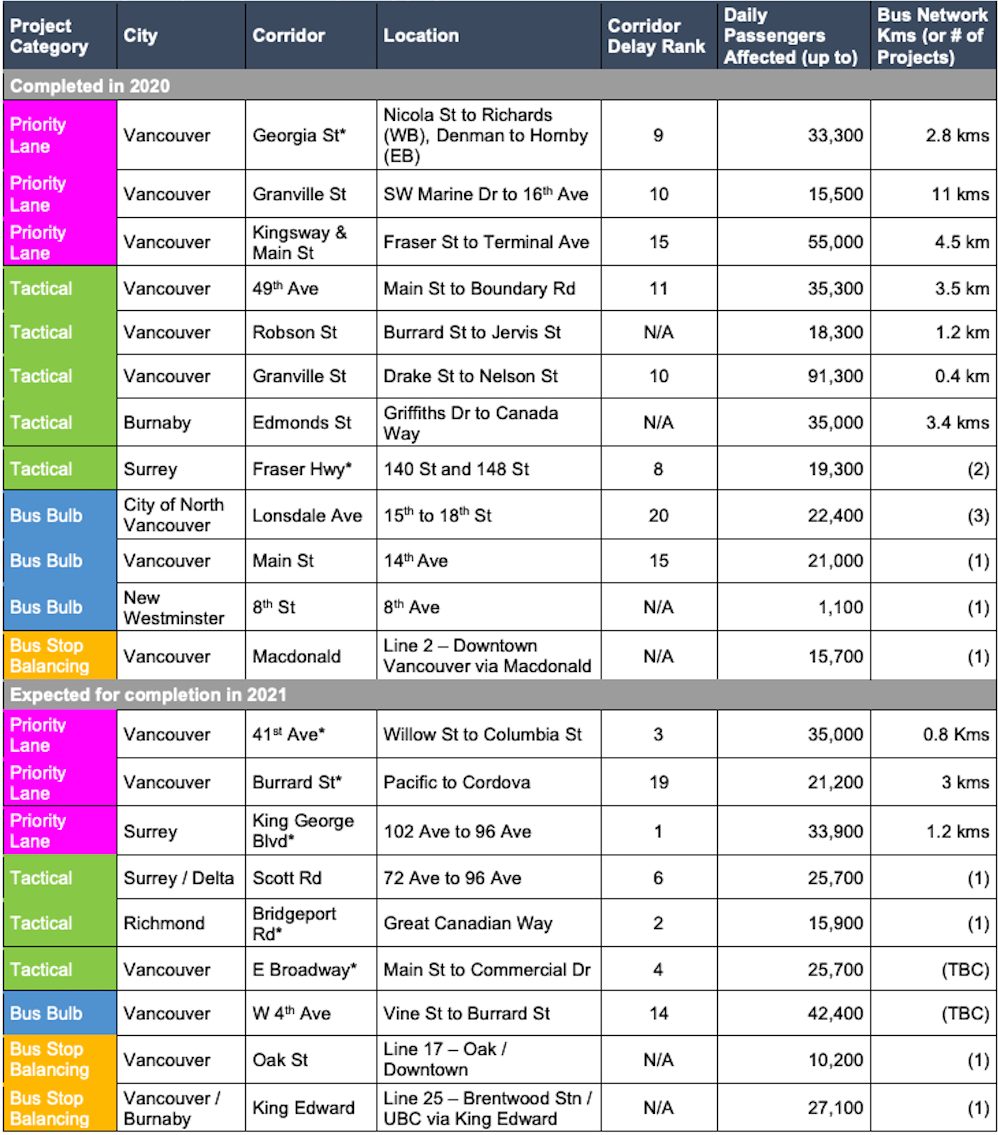 Bus priority measures, 2020-21. Click on the image for an enlarged version. (TransLink)