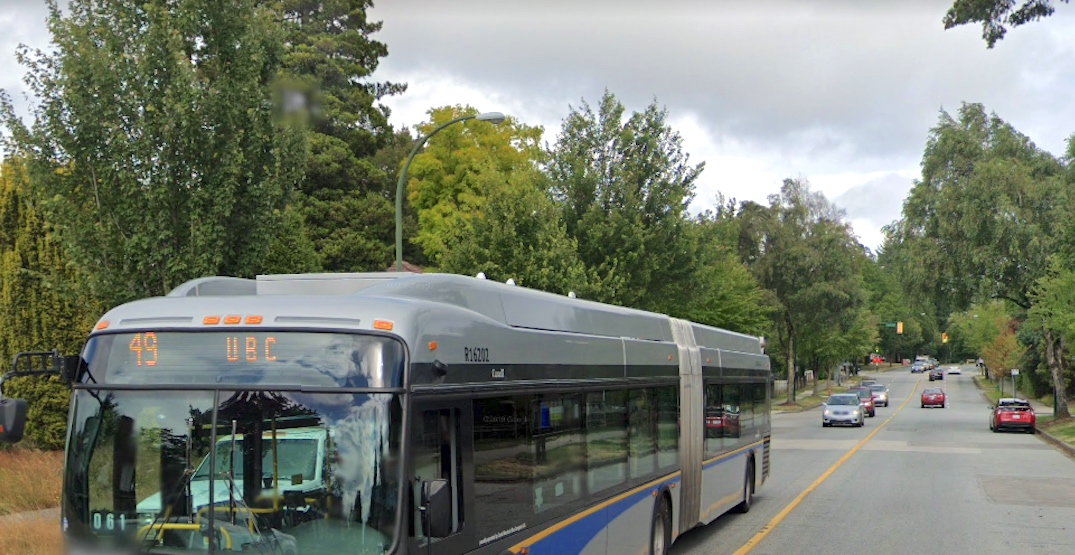 The No. 49 UBC/Metrotown bus along 49th Avenue. (Google Maps)

Bus-priority lanes will be rolled out along long stretches of Vancouver’s major arterial roadways, used by some of the region’s bus routes, before the end of the year.

The City of Vancouver announced today it is partnering with TransLink on converting curbside lanes on several corridors that experience the worst bus delays.

The public transit authority announced its plan over the summer to work with municipal governments across the region to take quick actions to implement bus priority measures that will help keep buses reliable and operating costs stable.

TransLink is providing funding to municipal governments to support these measures, which will help address bus reliability now that vehicle traffic volumes on roads have returned to near-normal levels.

“It’s critical people have efficient options for getting around the city as the economy recovers,” said Lon LaClaire, general manager of engineering services for the City of Vancouver, in a statement.

“These measures will help ensure transit remains a good option for the tens of thousands of people who use Vancouver buses every day to get to their jobs and to access businesses and essential services. By ensuring transit remains a reliable option, we can better manage road congestion at a time when supporting the movement of people and goods has never been more important.”

The various new measures are intended to be a one-year pilot project to inform possible permanent changes.

The No. 49 bus route uses articulated buses, and with an average of 31,350 weekday boardings, it is the second busiest bus route in the region after the 99 B-Line. Delays from traffic congestion and bus bunching are chronic issues on the 49th Avenue corridor within Vancouver.

The bus lanes along the corridor will be marked by temporary paint lines and bus diamonds. A number of locations will also see a bus zone extension.

New bus lanes on the Main Street and Kingsway corridors within Mount Pleasant will benefit the No. 3 Main/Downtown, No. 8 Fraser/Downtown, and No. 19 Metrotown/Stanley Park bus routes. Over 23,000 passengers use the bus stops within this area daily on average.

Moreover, all three routes are amongst the busiest bus routes in the region, with each route seeing an average of roughly 20,000 boardings each weekday.

Other measures to help speed up buses in the region include removing bus stops on routes that have stops spaced too closely together. As an initial project, TransLink removed about 25% of the stops on the No. 2 Macdonald/Downtown bus route for a pilot project this fall.

On Robson Street within the West End, the curbside lane at key locations has been repurposed as a sidewalk extension to reduce the need for the No. 5 Robson/Downtown trolley bus to merge in and out of traffic, and to provide waiting passengers and passersby on the sidewalk with more space. Other select bus stops on Robson Street have been closed for temporary sidewalk widening.

New bus bulges and wider sidewalks on the curb lanes of the 1000 and 1100 block of Robson Street.

It’s time to turn Robson Street between Burrard and Jervis streets into a pedestrian-only strip. This will revive Vancouver’s runway. #vanpoli #vancre pic.twitter.com/iBeHvVY28S

This follow TransLink’s recent bus-priority measures for its new RapidBus routes, launched earlier this year. This includes extensive bus-only lanes along the R4 RapidBus along Wesbrook Mall and 41st Avenue between UBC and SkyTrain’s Joyce-Collingwood Station.