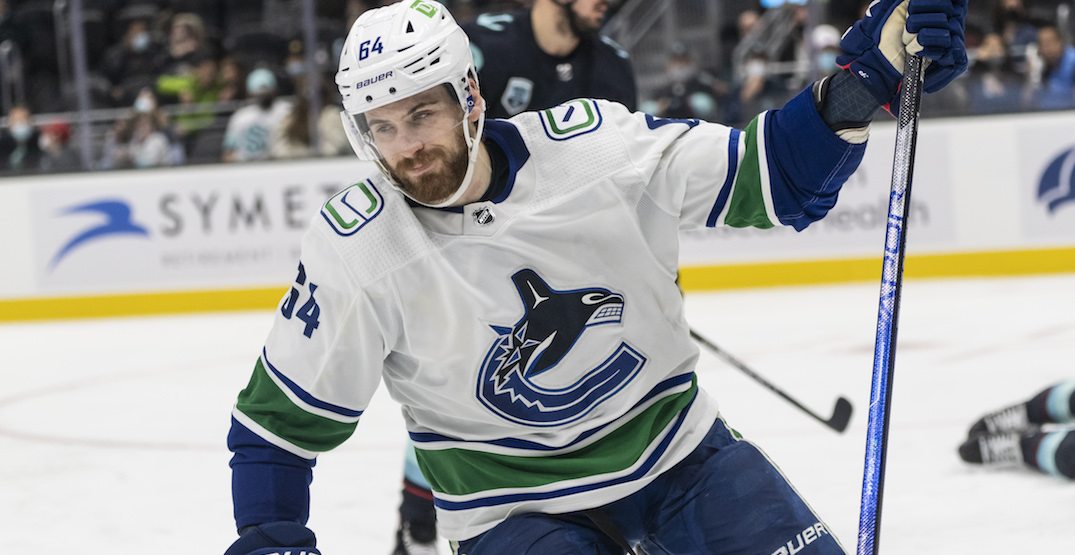 Despite constant trade chatter, the Vancouver Canucks aren’t in an impending rush to make moves before the March 21 deadline.

However, one player who they do need to make a decision on is pending UFA Tyler Motte.

General manager Patrik Allvin has already alluded to the fact that this team can’t let pending unrestricted free agents walk out the door for nothing.

That means a decision on Motte needs to be made in less than three weeks.

What Motte brings to the Canucks

Motte is the driving force on the Canucks’ highly successful checking line with Juho Lammikko and Matthew Highmore.

Both Lammikko and Highmore – and Highmore in particular – see their underlying numbers plummet in their even-strength minutes without Motte.

Despite being a prototypical fourth-line player, Motte’s 1.57 points-per-60 over the last two seasons is actually a low-end second-line rate.

That’s an impressive feat considering that the 26-year-old has gone up against the opposing team’s best lines on a regular basis.

On the penalty kill, Motte is easily the Canucks’ best forward. His 6.8 goals-against per-60 is best among Canucks forwards aside from Elias Pettersson, who has spent less than 15 minutes on the ice while shorthanded this season.

While Motte’s underlying numbers shorthanded are only mediocre, they don’t paint a full picture. The 26-year-old has shown an innate ability to read the play, stay in position, get in shooting lanes, and attack in transition shorthanded when the opportunity presents itself.

According to Rick Dhaliwal of CHEK TV, you can expect his raise to be north of $2 million on a multi-year deal.

There are a couple of comparables deals that were signed last offseason that give us a sense of what Motte’s value might be.

One example is Sean Kuraly, who was a penalty-killing fourth-line staple for the Boston Bruins prior to becoming a UFA last season.

In the offseason, he signed a four-year, $10 million deal with the Columbus Blue Jackets.

Brock McGinn was another comparable player who signed a similar contract this offseason. The former member of the Carolina Hurricanes signed a four-year, $11 million contract with the Pittsburgh Penguins this offseason.

McGinn did have one 16-goal season under his belt, whereas Motte has never topped 16 points in a season.

However, McGinn registered 0.29 points per game in the three years before he signed with Pittsburgh. Motte currently has 0.31 points per game over the last three seasons.

Based on those comparables, something in the three- to four-year range at $2 million to $2.5 million per season seems to be in the ballpark for what Motte’s camp might chase.

A four-year contract would take Motte to his age 30 season. With the number of contracts the Canucks have dished out to depth players who are exiting their prime, you have to wonder if this is the best course of action for the franchise.

For an idea of what Motte’s contract might look like on the low end, two comparables from last offseason are Tomas Nosek, who signed a two-year deal worth $1.75 million per season with the Boston Bruins, and Jordan Martinook, who also re-signed with the Carolina Hurricanes on a three-year deal worth $1.8 million annually.

The Canucks are about to enter another offseason where they lack their full arsenal of draft picks.

Currently, the Canucks don’t have a second-round pick in this year’s draft. If the Canucks could recoup a low-second rounder for Motte, that would be a win for the organization.

The watermark for trading a bottom-six forward is still the San Jose Sharks’ decision to deal Barclay Goodrow to the Tampa Bay Lightning back in 2019-20. They traded Goodrow and a third-round pick for a first-round pick and 26-year-old AHLer Anthony Greco.

Goodrow was statistically better than Motte at the time he was traded, although his stats were inflated by playing 16:37 per night.

The bar set by this deal, coupled with Motte’s value compared to Goodrow’s at the time, makes a low-end second-rounder seem like the absolute ceiling in a return.

Based on recent history though, the going rate for a bottom-six forward on the market has been a fourth-round pick.

Over the last three seasons, Nick Cousins, Austin Watson, Cody Eakin, and Brendan Lemieux are all examples of bottom-six players who were traded straight up for a fourth-rounder.

Vladislav Namestnikov is another comparable. He was actually traded twice in the same season for a fourth-round selection.

Most recently, the Ottawa Senators acquired bottom-six forward Zach Sanford from the St. Louis Blues. They paid a fourth-rounder and a middling prospect in Logan Brown.

While a second-round pick is the ceiling, acquiring a third or fourth-round pick and perhaps a middling prospect for Motte is the most likely return.